21. Why Brother Bear Has No Tail. Text Source: Nights with Uncle Remus by Joel Chandler Harris. Online at Project Gutenberg. I have removed the frame material and the eye-dialect, along with editing for paragraphing and punctuation.


WHY BRER BEAR HAS NO TAIL 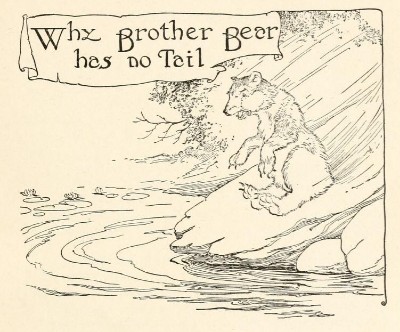 It ain't only chilluns what got the conceit of doing everything they see other folks do. It's grown folks what ought to know better. That's just the way Brer Bear get his tail broke off smick-smack-smooth, and down to this day he the funniest-looking critter what wobble on top of dry ground.

It seem like that in them days Brer Rabbit and Brer Terrapin done gone in cahoots for to outdo the other critters. One time Brer Rabbit took and make a call on Brer Terrapin, but when he get to Brer Terrapin house, he hear talk from Miss Terrapin that her old man done gone for to spend the day with Mr. Mud-Turtle, which they was blood kin.

Brer Rabbit he put out after Brer Terrapin, and when he got to Mr. Mud-Turtle house, they all sat up, they did, and told tales, and then when twelve o'clock come they had crawfish for dinner, and they enjoy theyself right along.

After dinner they went down to Mr. Mud-Turtle mill-pond, and when they get there Mr. Mud-Turtle and Brer Terrapin they amuse theyself, they did, with sliding from the top of a big slanting rock down into the water.

Whiles they was a-going on this a-way, a-having their fun, and enjoying theyself, here come old Brer Bear. He hear 'em laughing and hollering, and he hail 'em. "Heyo, folks! What all this? If my eye ain't deceive me, this here's Brer Rabbit, and Brer Terrapin, and old Uncle Tommy Mud-Turtle," says Brer Bear, says he.

"The same," says Brer Rabbit, says he, "and here we is enjoying the day that passes just like there weren't no hard times."

"Well, well, well!" says old Brer Bear, says he; "a-slipping and a-sliding and making free! And what the matter with Brer Rabbit that he ain't joining in?" says he.

Old Brer Rabbit he wink at Brer Terrapin, and Brer Terrapin he hunch Mr. Mud-Turtle, and then Brer Rabbit he up and allow, he did, "My goodness, Brer Bear! You can't expect a man for to slip and slide the whole blessed day, can you? I done had my fun, and now I'm a-sitting out here letting my clothes dry. It's turn and turn about with me and these gents when there's any fun going on," says he.

"Maybe Brer Bear might join in with us," says Brer Terrapin, says he.

Brer Rabbit he just holler and laugh. "Shoo!" says he; "Brer Bear foot too big and he tail too long for to slide down that rock," says he.

This kind of put Brer Bear on he mettle, and he up and respond, he did, "Maybe they is, and maybe they ain't, yet I ain't a-feared to try."

With that the others took and made way for him, and old Brer Bear he get up on the rock, he did, and squat down on he hunkers, and curl he tail under him, and start down. 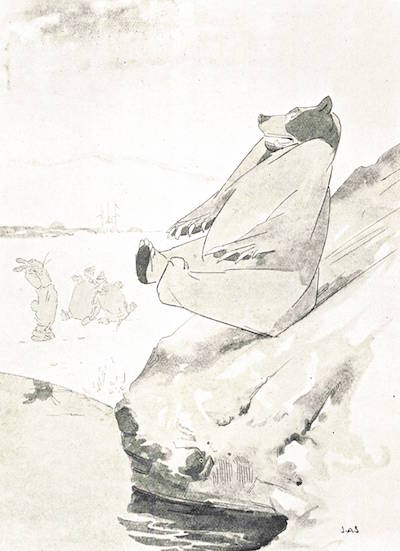 
You can give me denial, but just as sure as you are sitting there, when Brer Bear slicked up and flew down that rock, he break off he tail right smick-smack-smooth, and more than that, when he make his disappearance up the big road, Brer Rabbit holler out, "Brer Bear! O Brer Bear! I hear tell that flaxseed poultices is mighty good for sore places!"

Yet Brer Bear ain't look back. 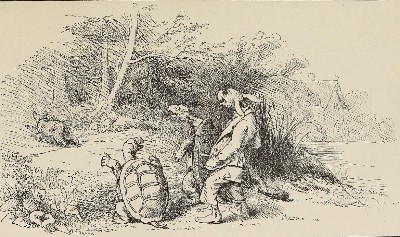