30. How Mr. Rabbit Succeeded in Raising a Dust. Text Source: Uncle Remus, His Songs and His Sayings by Joel Chandler Harris. Online at Project Gutenberg. I have removed the frame material and also the lines from "Jump Jim Crow," and I have also standardized the spelling; click here for the original spelling plus all notes to the story.

In them times, Brer Rabbit, and Brer Fox, and Brer Coon, and them other critters go courting and sparkling 'round the neighborhood more samer than folks. It weren't no "Lend me a horse," nor "Fetch me my buggy," but they just up and lit out and tote theyself. There's old Brer Fox, he just wheel 'round and fetch his flank one swipe with his tongue and he'd be comb up; and Brer Rabbit, he just spit on his hand and twist it 'round amongst the roots of his ears and his haired be roached. 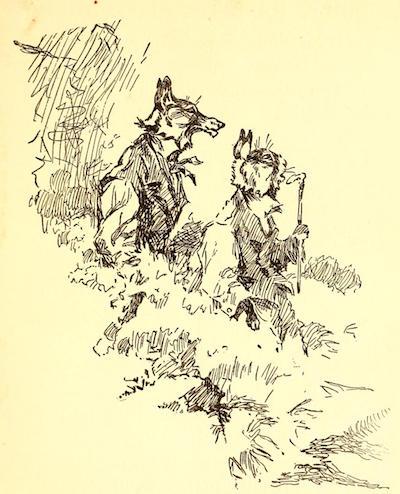 They was that flirtatious, that Miss Meadows and the gals don't see no peace from one week end to the other. Tuesday was same as Sunday, and Friday was same as Tuesday, and hit come down to that pass that when Miss Meadows'd have chicken-fixings for dinner, in'd drop Brer Fox and Brer Possum, and when she'd have fried greens in'd pop old Brer Rabbit, till last Miss Meadows, she took and tell the gals that she be dad-blame if she going to keep no tavern.

So they fix it up among theyself, Miss Meadows and the gals did, that the next time the gents call they'd give 'em a game. The gents, they was a-courting, but Miss Meadows, she don't want to marry none of 'em, and neither does the gals, and likewise they don't want to have 'em pestering 'round.

Last, one Tuesday, Miss Meadows, she told 'em that if they come down to her house the next Saturday evening, the whole caboodle of 'em'd go down the road a piece, where there was a big flint rock, and the man what could take a sledge-hammer and knock the dust out of that rock, he was the man what'd get the pick of the gals. They all say they gonna do it, but old Brer Rabbit, he crept off where there was a cool place under some jimson weeds, and there he sat working his mind how he going to get dust out of that rock.

By and by, while he was a-sitting there, up he jump and crack his heels together, and with that he put out for Brer Coon house and borrow his slippers. 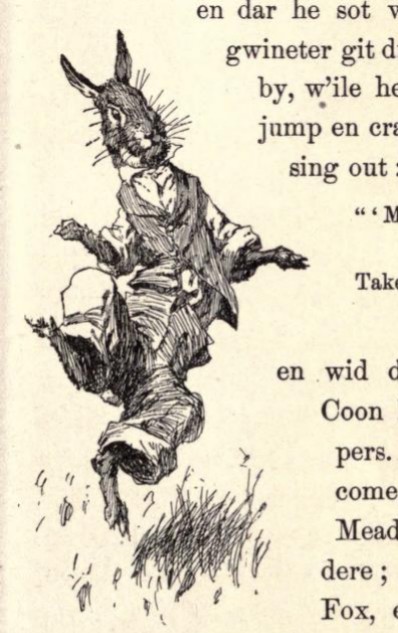 Brer Rabbit was there, but he shuffle up kind of late, 'cause when Miss Meadows and the balance of 'em done gone down to the place, Brer Rabbit, he crept 'round to the ash-hopper, and fill Brer Coon's slippers full of ashes, and then he took and put 'em on and march off. 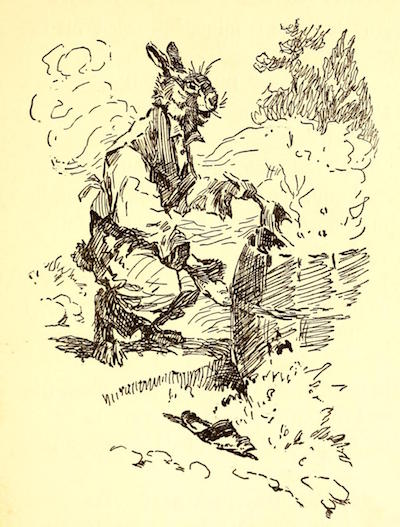 He got there after awhile, and soon as Miss Meadows and the gals seed him, they up and giggle, and make a great admiration 'cause Brer Rabbit got on slippers.

Brer Fox, he so smart, he holler out, he did, and say he lay Brer Rabbit got the ground-itch, but Brer Rabbit, he sort of shut one eye, he did, and say, says he, "I been so used to riding horse-back, as these ladies knows, that I'm getting sort of tender-footed;" and they don't hear much more from Brer Fox that day, 'cause he remember how Brer Rabbit done been and rid him; and hit was just about much as Miss Meadows and the gals could do for to keep their snickers from getting up a disturbance among the congregation.

But, never mind that, old Brer Rabbit, he was there, and he so brash that little more and he'd've grab up the sledge-hammer and've open up the racket before anybody give the word; but Brer Fox, he shove Brer Rabbit out of the way and pick up the sledge hisself.

Now then, the program was this here: Every gent were to have three licks at the rock, and the gent what fetch the dust he were the one what going to take the pick of the gals. Old Brer Fox, he grab the sledge-hammer, he did, and he come down on the rock—blim! No dust ain't come. Then he draw back and down he come again—blam! No dust ain't come. Then he spit in his hands, and give her a big swing and down she come—kerblap! And yet no dust ain't flew'd.

Then Brer Possum he make trial, and Brer Coon, and all the balance of 'em except Brer Terrapin, and he allow that he got a crick in his neck. 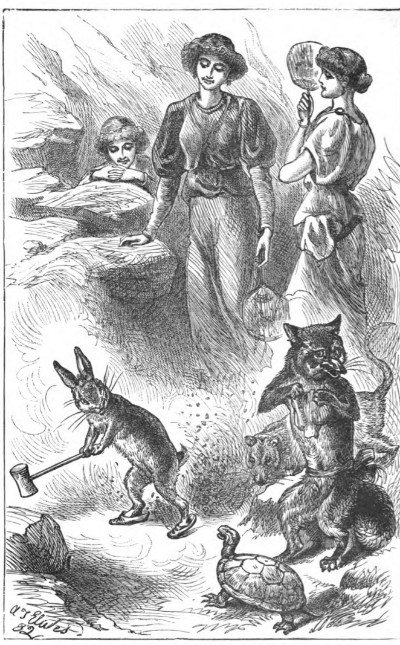 Then Brer Rabbit, he grab hold of the sledge, and he leaped up in the air and come down on the rock all at the same time—pow! 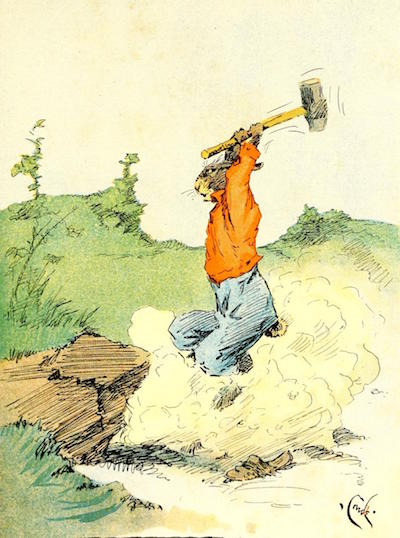 And the ashes, they flew'd up so, they did, that Brer Fox, he took and had a sneezing spell, and Miss Meadows and the gals they up and cough. 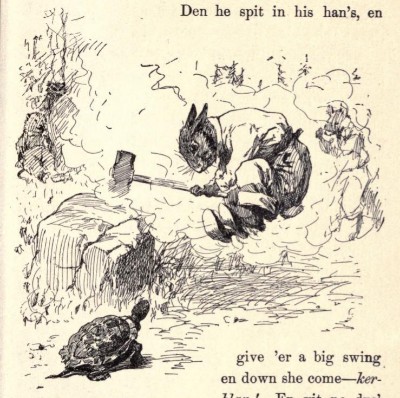 Three times Brer Rabbit jump up and crack his heels together and come down with the sledge-hammer—ker-blam!—en every time he jump up, he holler out, "Stand further, ladies! Here come the dust!" And sure enough, the dust come.

Leastways, Brer Rabbit got one of the gals, and they had a wedding and a big affair. 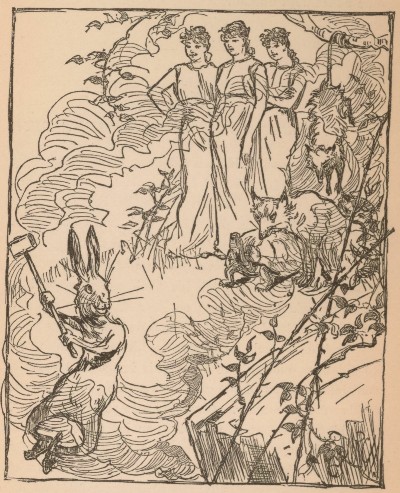