3. Why Mr. Possum Loves Peace. Text Source: Uncle Remus, His Songs and His Sayings by Joel Chandler Harris. Online at Project Gutenberg. I have removed the frame material and standardized the spelling; click here for the original spelling plus all notes to the story.

One night, Brer Possum call by for Brer Coon, according to agreement, and after gobbling up a dish of fried greens and smoking a cigar, they rambled forth for to see how the balance of the settlement was getting along. Brer Coon, he was one of these here natural pacers, and he racked along same as master's bay pony, and Brer Possum he went in a hand gallup; and they got over heap of ground, man. Brer Possum, he got his belly full of persimmons, and Brer Coon, he scoop up a abundance of frogs and tadpoles. They amble along, they did, just as sociable as a basket of kittens, till by and by they hear Mr. Dog talking to hisself way off in the woods.

Brer Possum sort of laugh 'round the corners of his mouth. "Oh, if he come, Brer Coon, I'm goin' to stan' by you,' says Brer Possum. "What you goin' to do?" says he.

Mr. Dog, he come and he come a zooming. And he ain't wait for to say howdy, neither. He just sail into the two of 'em. The very first pass he make, Brer Possum fetch a grin from ear to ear, and keel over like he was dead.

Then Mr. Dog, he sail into Brer Coon, and right there's where he drop his money purse, 'cause Brer Coon was cut out for that kind of business, and he fairly wipe up the face of the earth with him. You better believe that when Mr. Dog got a chance to make hisself scarce, he took it, and what there was left of him went skaddling through the woods like it was shot out of a musket. 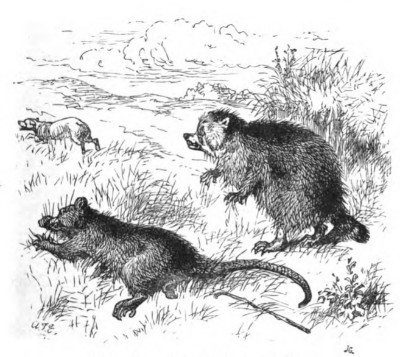 And Brer Coon, he sort of lick his clothes into shape and rack off, and Brer Possum, he lay there like he was dead, till by and by he raise up sort of careful like, and when he find the coast clear he scramble up and scamper off like something was after him. 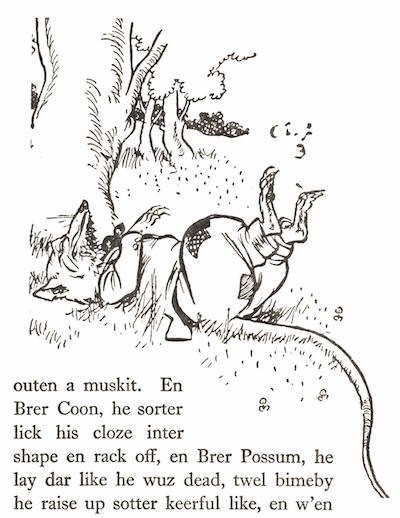 Next time Brer Possum met Brer Coon, Brer Coon refuse to respond to his howdy, and this make Brer Possum feel mighty bad, seeing as how they used to make so many excursions together.

"What make you hol' yo' head so high, Brer Coon?" says Brer Possum, says he.

"I ain't runnin' with cowards these days," says Brer Coon. "When I wants you I'll sen' for you," says he.

Then Brer Possum get mighty mad. 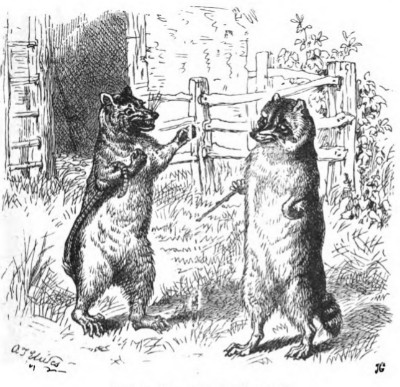 "You is," says Brer Coon, "that's who. I ain't 'sociatin' with them what lays down on the groun' an' plays dead when there's a free fight goin' on," says he.

Then Brer Possum grin and laugh fit to kill hisself. "Lor', Brer Coon, you don't 'spect I done that 'cause I was 'feared, does you?" says he. "Why I weren't no mo' 'feared than you is this minute. What there for to be scared of?" says he. "I know'd you'd get away with Mr. Dog if I didn't, an' I jus' lay there watchin' you shake him, waitin' for to put in when the time come," says he.

Brer Coon turn up his nose. "That's a mighty likely tale," says he, "when Mr. Dog ain't mo' than touch you 'fo' you keel over, an' lay there stiff," says he.

And down to this day, Brer Possum's bound to surrender when you touch him in the short ribs, and he'll laugh if he knows he's going to be smashed for it. 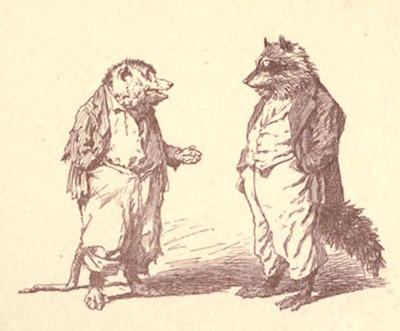