C067. How Guinea-Fowls Got Their Spots

33. Why the Guinea-fowls Are Speckled. Text Source: Nights with Uncle Remus by Joel Chandler Harris. Online at Project Gutenberg. I have removed the frame material and standardized the spelling; click here for the original spelling plus all notes to the story.


HOW GUINEA-FOWLS GOT THEIR SPOTS

Guinea-hens, they'll wake up and holler if they hear theyself snore. They'll fool you, sure. They looks queer, and they does queer. They ain't do like no other kind of chicken, and they ain't look like no other kind of chicken. Yet folks tell me that they are heap more curious looking now than what they used to be. I hear tell that they was one time when they was all blue, instead of having all them there teenchy little spots on 'em.

Well, then, one day Sis Cow was a-grazing about in the old field and looking after her calf. The weather was kind of hot, and the calf, he took and stand, he did, in he mammy shadow, so he can keep cool, and so that one flip of he mammy tail can keep the flies off of both of 'em. After while, 'long come a drove of Guineas. The Guineas, they howdied, and Sis Cow, she howdied, and the Guineas, they sort of picked 'round and sun theyself; and Sis Cow, she crop the grass and ask 'em the news of the neighborhoods. They went on this a-way till it weren't long before they hear mighty curious noise out there the other side of the old field. The Guineas, they make great admiration, just like they does these days, and old Sis Cow fling up her head and look all 'round. She ain't see nothing.

After while they hear the curious fuss again, and they look 'round, and bless gracious! Standing right there, 'twixt them and sundown, was a great big Lion!

You better believe there was a monstrous flutterment amongst the Guineas, and old Sis Cow, she looked mighty scared. The Lion love cow meat most better than he do any other kind of meat, and he shake he head and allow to hisself that he'll just about catch old Sis Cow and eat her up, and take and carry the calf to he family.

Then he took and shook he head, the Lion did, and make straight at Sis Cow. The Guineas they run this a-way, and they run the other way, and they run all 'round and 'round; but old Sis Cow, she just know she got to stand her ground, and when she see the Lion making towards her, she just took and dropped her head down and pawed the dirt. The Lion, he crept up, he did, and crept 'round, watching for good chance for to make a jump. He crept 'round, he did, but no difference which a-way he creep, there was old Sis Cow horns pointing right straight at him. Old Sis Cow, she paw the dirt, she did, and show the white of her eyes, and bellow way down in her stomach.

They went on this a-way, they did, till by and by the Guineas, they see that Sis Cow ain't so mighty scared, and then they begun to take heart. First news you know, one of 'em sort of drop he wings and fuzzle up the feathers and run out 'twixt Sis Cow and the Lion. When he get there, he sort of dip down, he did, and fling up dirt just like you see 'em do in the ash-pile. Then he took and run back, he did, and time he get back, another one run out and raise the dust 'twixt Sis Cow and the Lion. Then another one, he run out and dip down and shoo up the dust; then another one run out and dip down, and another one and yet another one, till, bless gracious! Time they all run out and dip down and raise the dust, the Lion was that blind till he ain't can see he hand before him. This make him so mad that he make a splunge at Sis Cow, and the old lady, she catch him on her horns and got him down, and just naturally tore his entrails out.

That she did—that she did! Yet it ain't make her proud, 'cause after the Lion done good and dead, she took and call up the Guineas, she did, and she allow, they been so quick for to help her out, that she want to pay 'em back.

The Guineas, they say, "Don't bother 'long of we all, Sis Cow. You had yo' fun and we all had ours, and excepting that there blood and hair on yo' horn, there ain't none of us any the worse off."

Then the Guineas, they took and huddle up, they did, and hold a confab with one another, and whiles they are doing this, old Sis Cow, she took and fetch a long breath, and then she call up her cud, and stood there chewing on it just like she ain't had no tribulation that day. 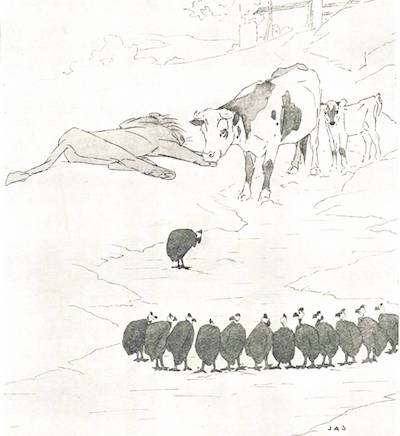 By and by one of the Guineas step out from the huddlement and make a bow and allow that they all'd be mighty proud if Sis Cow can fix it some way so they can't be seed so far through the woods, 'cause they look blue in the sun, and they look blue in the shade, and they can't hide theyself nohow. Sis Cow, she chew on her cud, and shut her eyes, and study. She chew and chew, and study and study. By and by she allow, "Go fetch me a pail!"

Guinea-hen laugh! "Lord, Sis Cow! What the name of goodness you gonna do with a pail?" 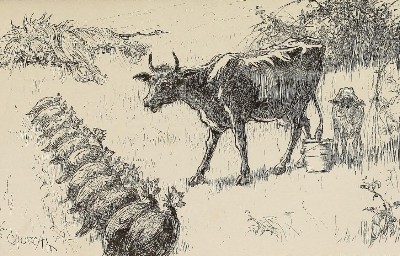 Guinea-hen, she runned off, she did, and after while here she come trotting back with a pail. She sat that pail down, and Sis Cow, she took her stand over it, and she let down her milk in there till she mighty nigh fill the pail full. Then she took and make them Guinea-hens get in a row, and she dip her tail in that there pail, and she switch it at the first one and sprinkle her all over with the milk; and every time she switch her tail at 'em she allow, "I loves this un!" Then she'd sing:
Oh, Blue, go away! You shall not stay!
Oh, Guinea, be Gray, be Gray!

She took and sprinkle the last one of 'em, and the Guineas, they sat in the sun till they get dry, and from that time out they got them little speckles on 'em.