6. Brother Rabbit Secures a Mansion. Text Source: Nights with Uncle Remus by Joel Chandler Harris. Online at Project Gutenberg. I have removed the frame material and standardized the spelling; click here for the original spelling plus all notes to the story.

I call to mind the tale about how old Brer Rabbit got him a two-story house widout laying out much cash. It turn out one time that a whole lot of the critters took a notion that they'd go in cahoots with building 'em a house. Old Brer Bear, he was amongst 'em, and Brer Fox, and Brer Wolf, and Brer Coon, and Brer Possum. I won't make sure, but it seem like to me that plumb down to old Brer Mink was amongst 'em. Leastways, there was a whole passel of 'em, and they whirl in, they did, and they build the house in less than no time. 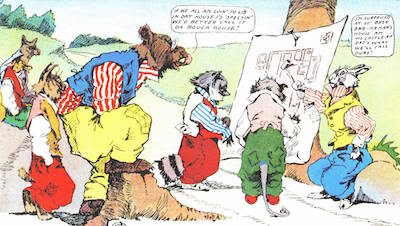 Brer Rabbit, he make like it make he head swim for to climb up on the scaffold, and likewise he say it make him catch the palsy for to work in the sun, but he got him a square, and he stuck a pencil behind he ear, and he went 'round measuring and marking—measuring and marking—and he was that busy that the other critters say to theyself he doing monstrous sight of work, and folks going along the big road say Brer Rabbit doing more hard work than the whole kit and boiling of 'em. 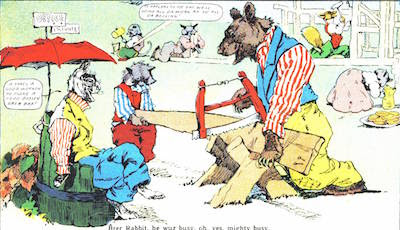 Yet all the time Brer Rabbit ain't doing nothing, and he just well been laying off in the shade scratching the fleas off of him. The other critters, they build the house, and, gentlemens, she was a fine one, too, man. She'd've been a fine one these days, let alone them days. She had a upstairs and downstairs, and chimneys all 'round, and she had rooms for all the critters what went into cahoots and help make it. 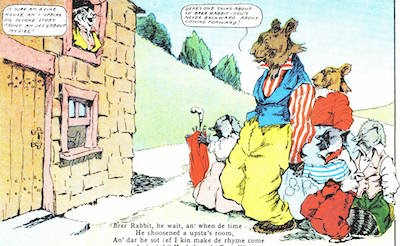 Brer Rabbit, he pick out one of the upstairs rooms, and he took and got him a gun, and one of these here brass cannons, and he took and put 'em in there when the other critters ain't looking, and then he took and got him a tub of nasty slop-water, which likewise he put in there when they ain't looking. So then, when they get the house all fix, and whiles they was all a-sitting in the parlor after supper, Brer Rabbit, he sort of gape and stretch hisself, and make his excuses and say he believe he'll go to he room. When he get there, and whiles all the other critters was a-laughing and a-chatting just as sociable as you please, Brer Rabbit, he stick he head out of the door of he room and sing out, "When a big man like me want to sit down, whereabouts he goin' to set?" says he.

Then the other critters they laugh, and holler back, "If big man like you can't set in a chair, he better sit down on the floor." 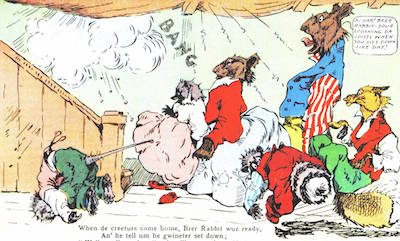 With that "bang!" went Brer Rabbit gun. Course, this sort of astonish the critters, and they look 'round at one another much as to say, what in the name of gracious is that? They listen and listen, but they don't hear no more fuss, and it weren't long before they got to chatting and jabbering some more. By and by, Brer Rabbit stick he head out of he room door, and sing out, "When a big man like me want to sneeze, whereabouts he goin' to sneeze at?"

Then the other critters, they took and holler back, "If big man like you ain't a-gone gump, he can sneeze anywhere he please."

'Watch out down there, then," says Brer Rabbit, says he. "'Cause I'm goin' to turn loose an' sneeze right here," says he.

With that, Brer Rabbit let off his cannon—bulderum-m-m! The window-glass they shook and rattle, and the house shook like she going to come down, and old Brer Bear, he fell out the rocking-chair—kerblump!

When the critters get sort of settle, Brer Possum and Brer Mink, they up and allow that Brer Rabbit got such a monstrous bad cold, they believe they'll step out and get some fresh air, but them other critters, they say they going to stick it out; and after while, when they get their hair smooth down, they begun to jower amongst theyself.

About that time, when they get in a good way, Brer Rabbit, he sing out, "When a big man like me take a chaw tobacco, whereabouts he going to spit?"

Then the other critters, they holler back, they did, sort of like they're mad, "Big man or little man, spit where you please." 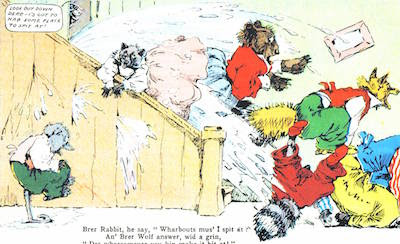 Then Brer Rabbit, he squall out, "This the way a big man spit!" and with that he tilt over the tub of slop-water, and when the other critters hear it come a-sloshing down the stair-steps, gentlemens, they just hoisted theyself out of there. Some of 'em went out the back door, and some of 'em went out the front door, and some of 'em fell out the windows; some went one way and some went another way; but they all went sailing out. 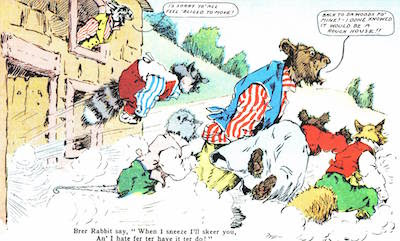 Brer Rabbit, he just took and shut up the house and fasten the windows, and then he got to bed, he did, and pull the coverlet up 'round he ears, and he sleep like a man what ain't owe nobody nothing; and neither do he owe 'em, 'cause if them other critters going get scared and run off from their own house, what business is that of Brer Rabbit? That what I like to know.