1. Mr. Fox and Miss Goose. Text Source: Nights with Uncle Remus by Joel Chandler Harris. Online at Project Gutenberg. I have removed the frame material and standardized the spelling; click here for the original spelling plus all notes to the story. 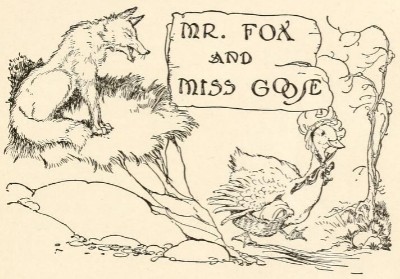 There here gooses is mighty curious fowls; they are mighty curious. In old times they was amongst the big-bugs, and in them days, when old Miss Goose begun a-dining, all the quality was there. Likewise, and neither was they stuck-up, 'cause with all their carrying-ons, Miss Goose weren't too proud for to take in washing for the neighborhoods, and she make money, and get slick and fat.

This the way matters stand when one day Brer Fox and Brer Rabbit, they was sitting up at the cotton-patch, one on one side the fence, and the other one on the other side, going on with one another, when first news they know, they hear something—blim, blim, blim!

Brer Fox, he ask what that fuss is, and Brer Rabbit, he up and respond that it's old Miss Goose down at the spring. Then Brer Fox, he up and ask what she doing, and Brer Rabbit, he say, sezee, that she battling clothes. That what they call it them days. These times, they rubs clothes on these here boards what got furrows in 'em, but them days they just took and took the clothes and lay 'em out on a bench, and catch hold of the battling-stick and naturally paddle the filling out of 'em.

When Brer Fox year that old Miss Goose was down there dabbling in soapsuds and washing clothes, he sort of lick he chops, and allow that some of these odd-come-shorts he going to call and pay he respects.

The minute he say that, Brer Rabbit, he know something was up, and he allow to hisself that he expect he better whirl in and have some fun whiles it going on.

By and by Brer Fox up and say to Brer Rabbit that he pleased to be moving along towards home, and with that they both say good-bye.

"I'd shake hands 'long with you, Brer Rabbit," says she, "but they are all full of suds," says she.

After old Miss Goose and Brer Rabbit done pass the time of day with one another, Brer Rabbit, he ask her, he did, how she come on these days, and Miss Goose say, mighty poorly.

"I'm gettin' stiff an' I'm gettin' clumsy," says she, "an' mo' than that I'm gettin' blind," says she. "Just 'fore you happen along, Brer Rabbit, I drop my specs in the tub here, an' if you'd've come 'long 'bout that time," says old Miss Goose, says she, "I lay I'd've took you for that nasty, audacious Brer Fox, an' it'd've been a born blessing if I hadn't've scald you with a pan of boilin' suds," says she. "I'm that glad I found my specs I don't know what to do," says old Miss Goose, says she.

Then Brer Rabbit, he up and say that being as how Sis Goose done fetch up Brer Fox name, he got something for to tell her, and then he let out about Brer Fox going to call on her.

With that, old Miss Goose wipe her hands on her apron, and put her specs up on her forehead, and look like she done got trouble in her mind. 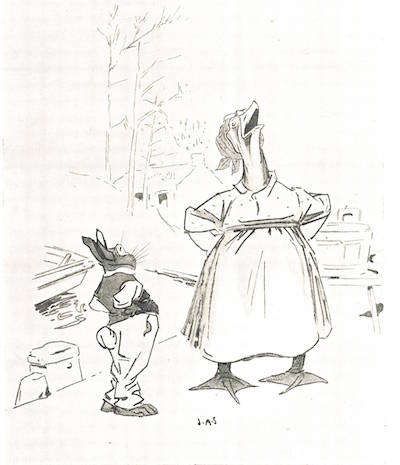 "Lords-a-mercy!" says she, "supposin' he come, Brer Rabbit! What I going do? And there ain't a man 'bout the house, neither," says she.

Then Brer Rabbit, he shut one eye, and he say, says he, "Sis Goose, the time done come when you pleased to roost high. You look like you got the dropsy," says he, "but don't mind that, 'cause if you don't roost high, you are a goner," says he. 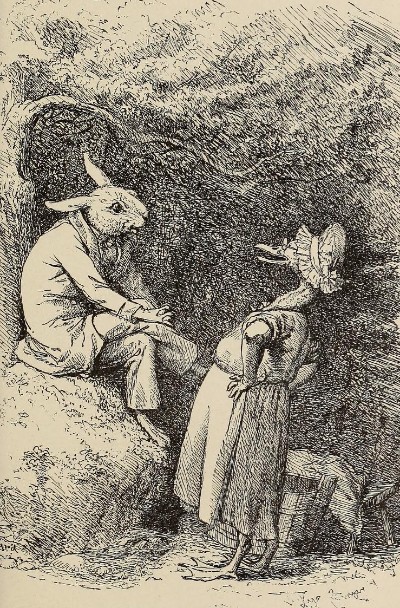 Then old Miss Goose ask Brer Rabbit what she going do, and Brer Rabbit he up and tell Miss Goose that she must go home and tie up a bundle of the white folks' clothes, and put 'em on the bed, and then she must fly up on a rafter, and let Brer Fox grab the clothes and run off with 'em.

Old Miss Goose say she much obliged, and she took and took her things and waddle off home, and that night she do like Brer Rabbit say with the bundle of clothes, and then she sent word to Mr. Dog, and Mr. Dog he come down, and say he'd sort of sit up with her.

Just before day, here come Brer Fox creeping up, and he went and push on the door easy, and the door open, and he see something white on the bed which he took for Miss Goose, and he grab it and run.

About that time Mr. Dog sail out from under the house, he did, and if Brer Fox hadn't've dropped the clothes, he'd've got caught.

From dat, word went 'round that Brer Fox been trying to steal Miss Goose clothes, and he come mighty nigh losing his standing at Miss Meadows.

Down to this day, Brer Fox believe that Brer Rabbit was the occasion of Mr. Dog being in the neighborhoods at that time of night, and Brer Rabbit ain't dispute it. The bad feeling 'twixt Brer Fox and Mr. Dog start right there, and it's been a-going on till now they ain't get in smelling distance of one another without there's a row.