C071. Brer Rabbit and the Mosquitoes

37. Brother Rabbit and the Mosquitoes. Text Source: Nights with Uncle Remus by Joel Chandler Harris. Online at Project Gutenberg. I have removed the frame material and standardized the spelling; click here for the original spelling plus all notes to the story.


BRER RABBIT and the MOSQUITOES

There was one time when Brer Wolf live in the swamp, and, more than that, he had a mighty likely gal. Look like all the other critters was after her. They'd go down there to Brer Wolf house, they would, and they'd sit up and court the gal, and enjoy theyself.

It went on this a-way till after while the mosquitoes begun to get monstrous bad. Brer Fox, he went flying 'round Miss Wolf, and he sat there, he did, and run on with her and fight mosquitoes just as big as life and twice as natural. Last Brer Wolf, he took and caught Brer Fox slapping and fighting at he mosquitoes. With that he took and took Brer Fox by the off ear and led him out to the front gate, and when he get there, heallow, he did, that no man what can't put up with mosquitoes ain't going to come a-courting his gal.

Then Brer Coon, he come flying 'round the gal, but he ain't been there no time scarcely 'fore he begun to knock at the mosquitoes; and no sooner is he done this than Brer Wolf show him the door. Brer Mink, he come and try he hand, yet he pleased to fight the mosquitoes, and Brer Wolf ask him out.

It went on this a-way till by and by all the critters been flying 'round Brer Wolf's gal excepting it's old Brer Rabbit, and when he hear what kind of treatments the other critters been catching he allow to hisself that he believe in he soul he must go down to Brer Wolf house and set the gal out one whet if it's the last act.

No sooner say, no sooner do. Off he put, and it weren't long 'fore he find hisself knocking at Brer Wolf front door. Old Sis Wolf, she took and put down her knitting and she up and allow, she did, "Who dat?"

The gal, she was standing up 'fore the looking-glass sorter primping, and she choke back a giggle, she did, and allow, "Sh-h-h! My goodness, mammy! That's Mr. Rabbit. I hear the gals say he's a mighty proper and particular gentleman, and I just hope you ain't going to sit there and run on like you most always does when I got company 'bout how much soap-grease you done save up and how many kitten the old cat got. I gets right ashamed sometimes, that I does!"

Old Sis Wolf, she sat there, she did, and settle her cap on her head, and snicker, and look at the gal like she monstrous proud. The gal, she took and shook herself 'fore the looking-glass a time or two, and then she tipped to the door and open it little ways and peep out just like she scared someone going to hit her a clip side the head. There stood old Brer Rabbit looking just as slick as a race-horse. The gal, she took and laugh, she did, and holler, "Why Lord, ma! It's Mr. Rabbit, an' here we been afraid it was someone what ain't got no business 'round here!"

Old Sis Wolf she look over her specs, and snicker, and then she up and allow, "Well, don't keep him standin' out there all night. Ask him in, for goodness sake."

Then the gal, she took and drop her handkerchief, and Brer Rabbit, he dipped down and grab it and pass it to her with a bow, and the gal say she much obliged, 'cause that was more than Mr. Fox would've done, and then she ask Brer Rabbit how he come on, and Brer Rabbit allow he right pert, and then he ask her whereabouts her daddy, and old Sis Wolf allow she go find him.

It weren't long 'fore Brer Rabbit hear Brer Wolf stomping the mud off of he foots in the back porch, and then by and by in he come. They shook hands, they did, and Brer Rabbit say that when he go calling on he acquaintance, it ain't feel natural 'cepting the man of the house sitting 'round somewheres.

"If he don't talk none," says Brer Rabbit, says he, "he can just sit up 'gainst the chimney-jam an' keep time by noddin'."

But old Brer Wolf, he one of these here kind of mens what got the whimsies and he up and allow that he don't let hisself get to nodding front of company. They run on this a-way till by and by Brer Rabbit hear the mosquitoes come zooming 'round, and claiming kin with him. Course they claim kin with him. They claims kin with folks yet, let 'lone Brer Rabbit. Manys and manys the time when I hear 'em sailing 'round and singing out "Cousin! Cousin!" and I let you know, the mosquitoes is mighty close kin when they gets to be your cousin.

Brer Rabbit, he hear 'em zooming, and he know he got to do some mighty nice talking, so he up and ask for drink of water. The gal, she took and fetched it.

"Some say it too full of wiggletails, Brer Rabbit." (The mosquitoes, they zoom and they zoom.)

"Mighty nice place you got, Brer Wolf." (Mosquitoes they zoom.)

"Some say it too low in the swamp, Brer Rabbit." (Mosquitoes they zoom and they zoom.)

They zoom so bad that Brer Rabbit begun to get scared, and when that critter get scared, he mind work like one of these here flutter-mills. By and by, he allow, "Went to town the other day, and there I seed a sight what I never 'spected to see."

"What that, Brer Rabbit?"

"I most surely seed him, Brer Wolf."

Brer Wolf, he scratch he head, and the gal she held up her hands and make great admiration about the spotted horse. (The mosquitoes they zoom, and they keep on zooming.)

Brer Rabbit, he talk on, he did, "It weren't just one spotted horse, Brer Wolf, it was a whole team of spotted horses, and they went galloping-up horses," says he. 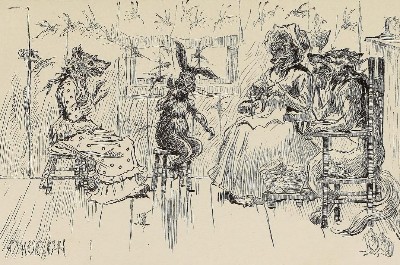 Gal, she squeal and holler out, "Why, Brer Rabbit! Ain't you ashamed yo'self for to be talkin' that a-way, an' about yo' own-alone blood kin too?"

Old Sis Wolf, she allow, "To be surely, to be surely!" (Mosquito zoom and come nigher and nigher.)

Brer Rabbit allow, "Yessir! Just as sure as you are sitting there, my grandaddy was spotted. Spotted all over." (Mosquito come zooming up and light on Brer Rabbit jaw.)

"He was that. He had a great big spot right here!" [storyteller slaps] 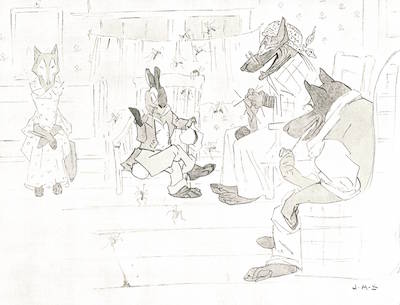 No sooner is he do this than another mosquito come zooming 'round and light on Brer Rabbit leg. Brer Rabbit, he talk, and he talk, "Poor old grandaddy! I bound he make you laugh, he look so funny with all them spots and speckles. He had spot on the side of the head, where I done show you, and then he had another big spot right here on the leg," says he. [storyteller slaps]

Then he talk, "Believe me or not believe me if you mind to, but my grandaddy had a big black spot up here on he back which look like saddle-mark."

Blip! Brer Rabbit took hisself on the back!

Mosquito sail 'round and zoom and light down here upon the hip-bone. He say he grandaddy got spot down there.

Blip! He took hisself upon the hip-bone.

It keep on this a-way, till by and by old Brer Wolf and old Sis Wolf they listen at Brer Rabbit till they begun to nod, and then old Brer Rabbit and the gal they sat up there and kill mosquitoes right along. 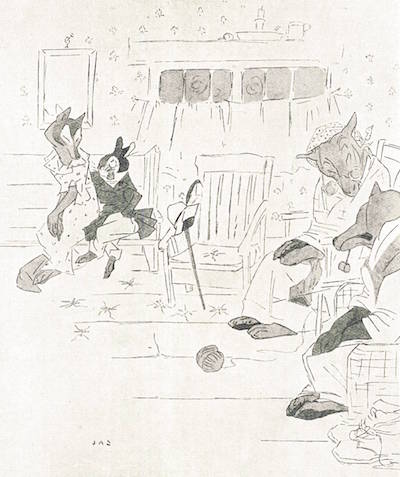 I hear talk that Brer Wolf sent Brer Rabbit word next day that he can get the gal by going after her, but I ain't never hear talk about Brer Rabbit going. The day aftewards was mighty long time, and by then Brer Rabbit might've had some other project on hand.