6. How Mr. Lion Lost His Wool. Text Source: Uncle Remus and Brer Rabbit by Joel Chandler Harris. Online at Project Gutenberg. I have removed the frame material and standardized the spelling; click here for the original spelling plus all notes to the story.

Mr. Man took a notion that the time done come for him for to have a hog-killing and he got him a big barrel, and fill it half full of water from the big springs. Then he piled up about a cord of wood, and as he piled, he put rocks 'twixt the logs, and then he sat the wood after at both ends and in the middle. It weren't long 'fore they had the hogs killed, and everything ready for to scrape the hair off. Then he took the red-hot rocks what he put in the fire, and flung 'em in the barrel where the water was, and it weren't long, man, 'fore that water was ready for to boil. Then they took the hogs, one at a time, and soused 'em in the water, and time they took 'em out, the hair was ready for to drop out by the roots. Then they'd scrape 'em with sticks and chips, and they ain't leave a hair on 'em. 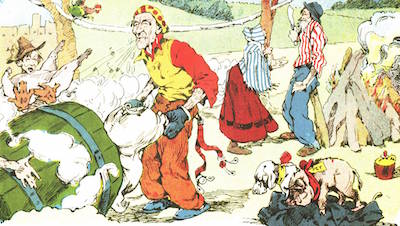 
Well, by and by, they had all the hogs killed and cleaned, and hauled off, and when everything was still as a sitting hen, old Brer Rabbit stuck his head out from behind a bush where he been sitting at. He stuck his head out, he did, and look all 'round, and then he went where the fire was and try for to warm hisself. He ain't been there long 'fore here come Brer Wolf and Brer Fox, and then he got busy. 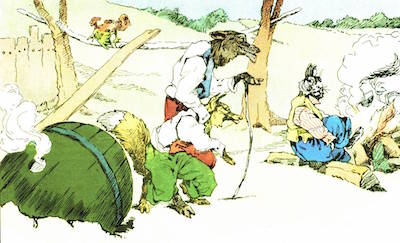 He say, "Hello, friends! Howdy and welcome! I'm just fixing for to take a warm bath like Mr. Man give his hogs; won't you join me?"

They say they ain't in no hurry, but they help Brer Rabbit put the hot rocks in the barrel and they watch the water bubble, and by and by, when everything was ready, who should walk up but old Mr. Lion? 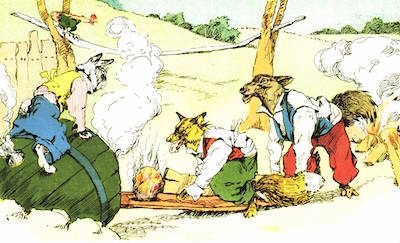 He had a mane from his head plumb to the end of his tail, and in some places it was so long it drug on the ground — that what make all the critters afeared of him. He growl and ask 'em what they doing, and when Brer Rabbit tell him, he say that's what he long been needing. "How does you get in?" 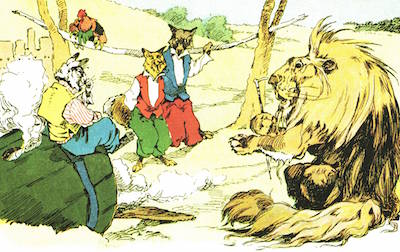 
"Just back right in," says old Brer Rabbit, says he, and with that, Mr. Lion backed in, and the water was so hot, he try for to get out, and he slipped in plumb to his shoulder-blades. You can believe me or not, but that critter was scalded so that he hollered and scared everybody far miles around. 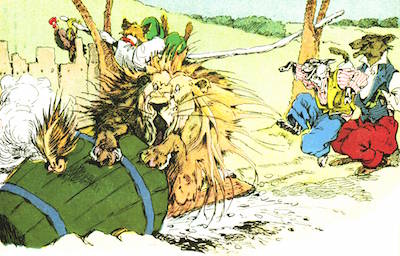 And when he come out, all the wool dropped out, except the bunch you see on his neck, and the little bit you'll find on the end of his tail — and that'd've come off if the tail hadn't've slipped through the bung-hole of the barrel. 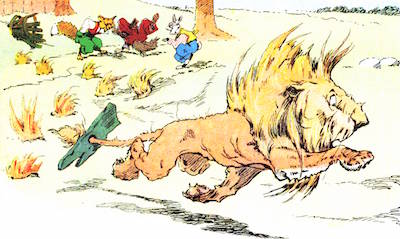