C165. Brer Rabbit and the Gold Mine

5. Brother Rabbit and the Gold Mine. Text Source: Uncle Remus and Brer Rabbit by Joel Chandler Harris. Online at Project Gutenberg. I have removed the frame material and standardized the spelling; click here for the original spelling plus all notes to the story.

Well, sir, one year it fell out that the crops was burnt up. A dry drought had done the work, and if you'd've struck a match anywhere in that settlement, the whole county would've blazed up.

Old man Hongriness just naturally took off his clothes and went parading about everywhere, and the critters got bony and skinny. Old Brer Bear done better than any of 'em, 'cause all he had to do was go to sleep and live off of his own fat; and Brer Rabbit and his old woman had put some calamus root by, and saved up some sugar-cane that they find lying 'round loose, and they got along pretty well. But the balance of the critters was that gaunt that they ain't got over it down to this day. 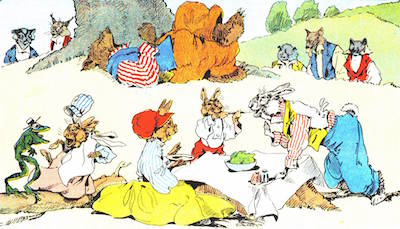 
The critters had their meeting-place, where they could all sat 'round and talk the kind of politics they had, just like folks does at the crossroads grocery. One day, whiles they was all sitting and squatting 'round, jowering and confabbing, Brer Rabbit, he up and say, says he, that old Mammy-Bammy-Big-Money told his great grandaddy that there was a mighty big and fat gold mine in there parts, and he say that he wouldn't be at all astonished if it weren't somewheres close to Brer Bear's house.

Brer Bear, he growled, he did, and say that the gold mine better not let him find it, 'cause after he got done with it, there won't be no gold mine there. 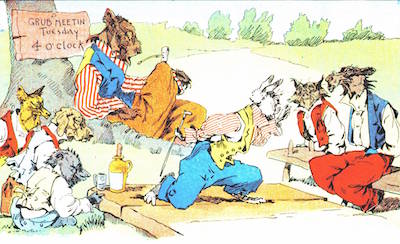 
Some laughed, some grinned and some gapped, and, after jowering some more, they all put out to where their families was living at; but I bound you they ain't forget about that gold mine, 'cause, from that time on, go where you might, you'd catch some of the critters digging and grabbling in the ground, some in the fields, some in the woods, and some in the big road; and they was so weak and hungry that they can scarcely grabble for falling down.

Well, this went on for the longest, but by and by, one day, they all agree that something pleased to be done, and they say they'll all take one big hunt for the gold mine, and then quit. 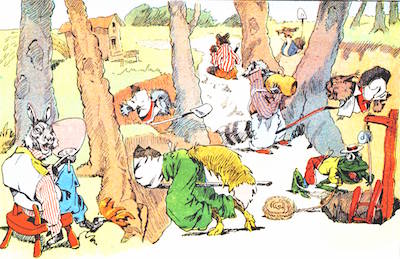 They hunted in gangs, with the gangs not far from one another, and it so happen that Brer Rabbit was in the gang with Brer Wolf, and he knowed that he had to keep his eyes wide open.

All the critters had to dig in different places, and whiles Brer Rabbit weren't much of a grabbler, he had a way of making the others believe that he was the best of the lot. So he made a heap of motion like he was tearing up the earth.

They ain't been going on this away long 'fore Brer Wolf holler out, "Run here, Brer Rabbit! I done found it!"

Brer Bear and Brer Fox was both digging close by, and Brer Rabbit kind of wunk one eye at the elements; he say, says he, "Glad I is for you sake, Brer Wolf; get you gold and enjoy yourself!" 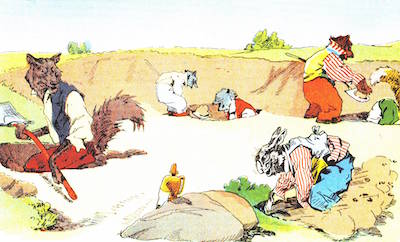 Old Brer Rabbit respond, "I'll take the leavings, Brer Wolf; you take what you want, and then when you done got enough I'll get the little bit I want."

Brer Wolf say, "I want to show you something."

Brer Rabbit allow, "My eyes ain't big for nothing."

Brer Wolf say, "I got a secret I want to tell you."

Brer Rabbit allow, "My ears ain't long for nothing. Just stand there and do your whispering, Brer Wolf, and I'll hear every word you say." 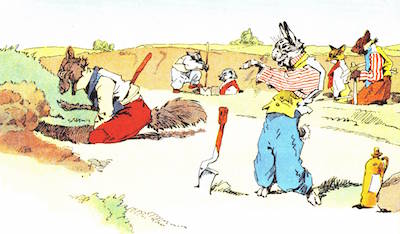 
Brer Wolf ain't say nothing, but make out he's grabbling, and then, all of a sudden, he made a dash at Brer Rabbit, but when he get where Brer Rabbit was at, Brer Rabbit ain't there no more; he done gone.

Weak and hungry as he is, Brer Wolf know that he can't catch Brer Rabbit, and so he holler out, "What's your hurry, Brer Rabbit? Where you going?' Brer Rabbit holler back, "I'm going home after a bag for to tote the gold you going leave me! So long, Brer Wolf; I wish you mighty well!" and with that he put out for home. 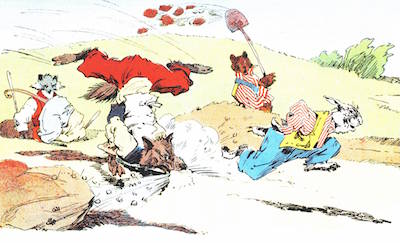