C145. Why Mr. Cricket Has Elbows on His Legs

2. Why Mr. Cricket Has Elbows on His Legs. Text Source: Told by Uncle Remus by Joel Chandler Harris. Online at Project Gutenberg. I have removed the frame material and standardized the spelling; click here for the original spelling plus all notes to the story.


GRANDADDY CRICKET in the CHIMNEY

I'm going tell you about old Grandaddy Cricket. He must've been a grandaddy long about the time that my great-grandaddy's great-grandaddy was working for his great-grandaddy. Howsomever that might be, old Grandaddy Cricket was on hand, and from all I hear he was bigger than a middling-size goat. All enduring of the hot weather, he'd stay out in the woods with his fife and his fiddle, and I expect he had great times. One day he'd fiddle for the fishes for to dance, and the next he'd learn the young birds how to whistle with his fife. Day in and day out he frolicked and had his fun, but by and by the weather begun to get cool and the days begun to get shorter, and old Grandaddy Cricket had to keep his hands in his pockets from soon in the morning till ten o'clock. And 'long about the time when the sun start down hill, he'd have to put his fiddle under his arm and his fife in his side-pocket.

This was bad enough, but worse come. It got so cold that Grandaddy Cricket can't scarcely walk till the sun was shining right over him. More than that, he begun to get hungry and stay hungry. If you'd've seed him in the hot weather, fiddling and dancing, and fifing and prancing, you'd've thunk that he had a stack of vittles put by as big as the barn back yonder; but by and by it got so cold that he know something got to be done. He know something got to be done, but how or when he couldn't've told you if it had've been the last act. He went along, creeping and crawling from post to pillar, and he remembered the days when he went with a hop, skip and a jump, but he was too cold for to cry.

He crept along, trying to keep on the sunny side of the world, till by and by, one day he seed smoke a-rising way off yonder, and he know'd mighty well that where there's smoke there pleased to be fire. He crept and he crawled, and by and by he come close enough to the smoke for to see that it was coming out of a chimney that'd been built on one end of a house. It weren't like the houses what you see up yonder in Atlanta, 'cause it was made out of logs, and the chink 'twixt the logs was stopped up with red clay. The chimney was made out of sticks and stones and mud.

Grandaddy Cricket was forty-eleven times bigger than what his family is these days, but he weren't so big that he couldn't crawl under the house, 'cause it was propped up on pillars. So under the house he went and scrounge close to the chimney for to see if he can't get some of the warmth, but, bless you, it was stone cold. If it had've been like the chimneys is these days, old Grandaddy Cricket would've friz stiff, but it was plain, everyday mud plastered on some sticks laid crossways. It was hard for old Grandaddy Cricket for to work his way into the chimney, but harder for to stay out of the cold—so he sat in to work. He gnawed and he sawed, he scratched and he clawed, he pushed and he gouged, and he shoved and he scrounged, till, by and by, he got where he could feel some of the warmth of the fire, and it weren't long 'fore he was feeling fine.

He ain't no sooner get thawed out than he begun to feel good. There was some cracks and crannies in the hearth of the fireplace, and when the chillun eat their mush and milk, some of the crumbs'd sift through the hearth. Old Grandaddy Cricket smelt 'em, and felt 'em, and held 'em, and after that you couldn't make him believe that he wasn't in hog-heaven.

The place where he was at weren't roomy enough for fiddling, but he took out his fife and begun to play on it, and every time he hear a noise he'd cut the tune short. He'd blow a little and then break off, but take the day as it come, he put in a right smart lot of fifing. When night come, and everything was dark down there where he was at, he just turned hisself loose. The chillun in the house, they just listen and laugh, but their daddy shake his head and look sour. There weren't no crickets in the country where he come from, and he weren't used to 'em. But the mammy of the chillun ain't pay no attention to the fifing; she just went on about her business like there ain't no cricket in the round world.

Old Grandaddy Cricket he fifed and fifed just like he was doing it for pay. He played the chillun off to bed and played 'em to sleep; he played till the old man got to nid-nid-nodding by the fire; he played till they* all went to bed except the mammy, and he played whiles she sat by the hearth, and dreamt about the times when she was a gal—the old times that make the grandchillun feel so funny when they hear tell about 'em.

Night after night the fifing went on, and by and by the man begun to get tired. The woman, she say that the crickets brung good luck, but the man, he say he'd rather have more luck and less fifing. 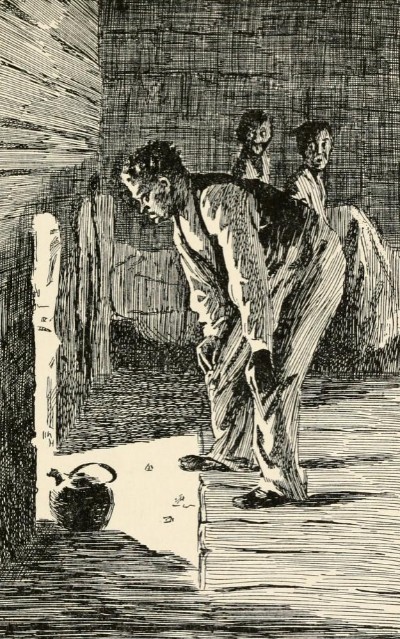 So he holler down through the crack in the hearth, and tell old Grandaddy Cricket for to hush his fuss or change his tune. But the fifing went on. The man holler down and say that if the fifing don't stop, he going to pour boiling water on the fifer. old Grandaddy Cricket holler back:
Hot water will turn me brown,
And then I'll kick your chimney down.

The man, he grin, he did, and then he put the kettle on the fire and kept it there till the water begun to boil, and then, whiles the fifing was at the loudest, he took the kettle and tilted it so the scalding water will run down through the cracks, and then the first thing he knowed he ain't know nothing, 'cause the water weakened the clay and the hearth fell in and old Grandaddy Cricket sat in to kicking, and the chimney come down, it did, and bury the man, and when they got him out, he was one-eyed and splay-footed. 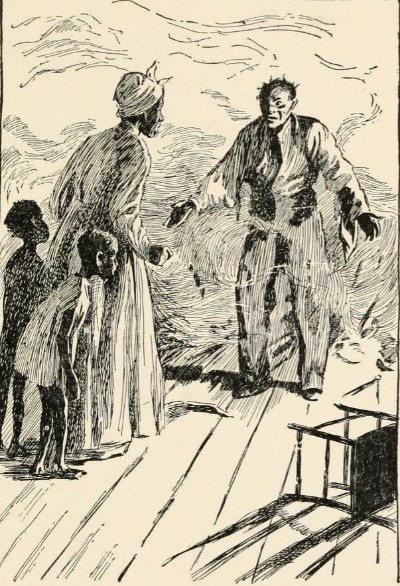 The woman and the chillun ain't scarcely know him. They had to ask him his name, and where he come from, and how old he was; and after he satisfied 'em that he was the same man what been living there all the time, the woman say, "Ain't I tell you that crickets fetch good luck?" and the man, he allow, "Does you call this good luck?"

Old Grandaddy Cricket kicked so hard, and kicked so high, that he unjoined both his legs, and when he crawled out from the chimney, his elbows was where his knees ought to be at. There weren't but one thing he could do; he went on to next house and got in the chimney and he been living in chimneys off and on down to this day and time.