31. A Plantation Witch. Text Source: Uncle Remus, His Songs and His Sayings by Joel Chandler Harris. Online at Project Gutenberg. I have removed the frame material and standardized the spelling; click here for the original spelling plus all notes to the story.

Master been driving the horse sort of hard, and I say to myself that I'd drop 'round about dust and fling another ear of corn in the trough and kind of give him a touching up with the currier-comb; and bless gracious! I ain't been in the lot more than a minute before I seed something was wrong with the horse, and sure enough there was his mane full of witch-stirrups. When you see two strand of hair tied together in a horse's mane, there you see a witch-stirrup, and, more than that, that horse done been rid by 'em. When I see coon track in the branch, I know the coon been along there.

Witches comes different. They comes and they conjures folks. Squinch-owl holler every time he see a witch, and when you hear the dog howling in the middle of the night, one of 'em's mighty apt to be prowling 'round. Conjuring folks can tell a witch the minute they lays their eyes on it, but them what ain't conjuring, it's mighty hard to tell when they see one, 'cause they might come in the appearance of a cow and all kind of critters.

I ain't been used to no conjuring myself, but I been living long enough for to know when you meets up with a big black cat in the middle of the road, with yellow eyeballs, there's your witch fresh from the Old Boy. 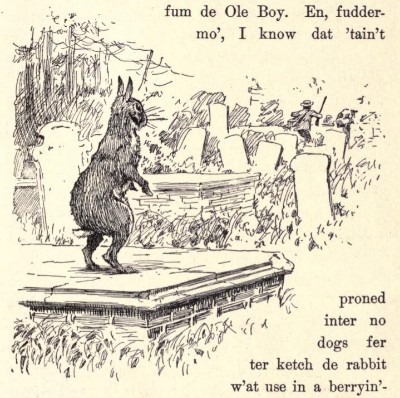 And, furthermore, I know that it ain't proned into no dogs for to catch the rabbit what use in a burying-ground. They are the most ungodliest critters what you ever laid eyes on. Master he make like he going to catch one of 'em there graveyard rabbits. Sure enough, out he goes, and the dogs ain't no more than got to the place before up jump the old rabbit right among 'em, and after running 'round a time or two, she skip right up to Master, and Master, he just put the gun-barrel right on her and lammed a-loose. It tored up the ground all 'round, and the dogs, they rush up, but there weren't no rabbit there; but by and by Master, he seed the dogs tucking their tails between their legs, and he look up, and there was the rabbit capering 'round on a tomb stone, and with that Master say he sort of feel like the time done come when they was expecting on him home, and he call off the dogs and put out. 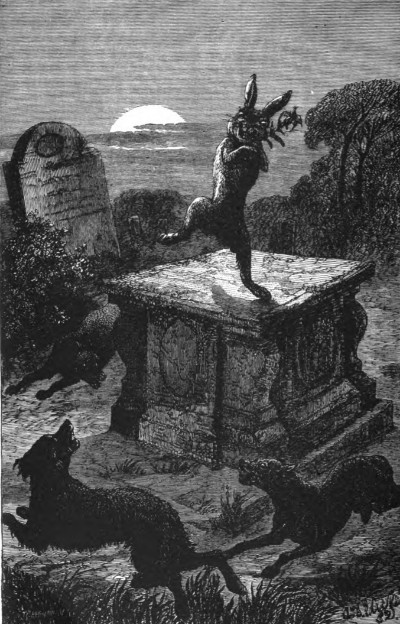 But them was haunts. Witches is these here kind of folks what can drop their body and change into a cat and a wolf and all kind of critters.

I know'd a black man which his brother was a witch, 'cause he up and told me how he took and cured him; and he cured him good, man. It seem like that witch folks is got a slit in the back of the neck, and when they want to change theirself, they just pull the hide over their head same as if it was a shirt, and there they is. Well, that just exactly the way they does.

But dish here black man what I'm telling you about, he cured his brother the very first pass he made at him. It got so that folks in the settlement didn't have no peace. the chilluns would wake up in the mornings with their hair tangle up, and with scratches on 'em like they been through a brier-patch, till by and by one day the man he allow that he'd sit up that night and keep one eye on his brother.

And sure enough that night, just as the chickens was crowing for twelve, up jump the brother and pull off his skin and sail out of the house in the shape of a bat, and what does the man do but grab up the hide, and turn it wrong-side outwards and sprinkle it with salt. Then he lay down and watch for to see what the news was going to be. Just before day here come a big black cat in the door, and the man get up, he did, and drove her away.

By and by, here come a big black dog snuffing round, and the man up with a chunk and lammed him side of the head.

Then a squinch-owl lit on the comb of the house, and the man jam the shovel in the fire and make him flew away.

Last, here come a great big black wolf with his eyes shining like fire coals, and he grab the hide and rush out. 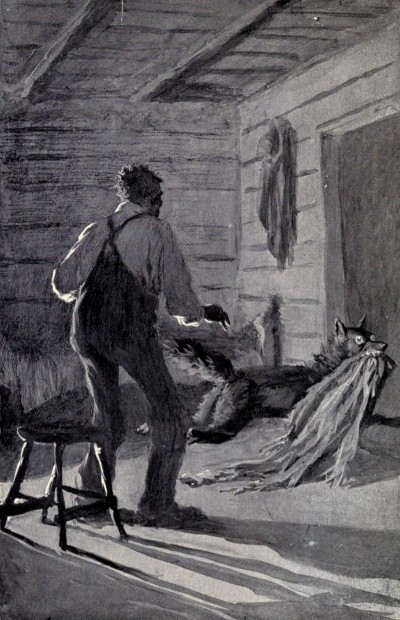 It weren't long before the man hear his brother hollering and squalling, and he took a light, he did, and went out, and there was his brother just a wallowing on the ground and squirming 'round, 'cause the salt on the skin was stinging worse than if he had his britches lined with yellowjackets.

By next morning he got so he could sort of shuffle long, but he gave up conjuring, and if there was any more witches in that settlement they kept mighty close, and that man he ain't skinned hisself no more not enduring of my remembrance.