56. Brother Rabbit Ties Mr. Lion. Text Source: Nights with Uncle Remus by Joel Chandler Harris. Online at Project Gutenberg. I have removed the frame material and standardized the spelling; click here for the original spelling plus all notes to the story.

It seem like that one time when Brer Rabbit find hisself way off in the middle of the woods, the wind strike up and begun to blow. It blow down on the ground and it blow up in the top of the timber, and it blow so hard till directly Brer Rabbit took a notion that he better get out from there 'fore the timber begun to fall.

Brer Rabbit, he broke and run, and, man — sir! When that critter runned he runned, now you hear what I tell you! He broke and run, he did, and he fairly flew 'way from there. Whiles he going along full tilt, he runned against old Mr. Lion. Mr. Lion, he hail 'im, "Heyo, Brer Rabbit! What your hurry?"

"Run, Mr. Lion, run! There's a hurricane coming back there in the timbers. You better run!"

This make Mr. Lion sort of scared. He allow, "I most too heavy for to run far, Brer Rabbit. What I gonna do?"

Mr. Lion shake his head. He allow, "If wind liable for to pick up little man like you is, Brer Rabbit, what it going do with big man like me?"

Mr. Lion lash hisself with his tail. He allow, "What I gonna do if the wind blow all day and a good part of the night, Brer Rabbit?"

Mr. Lion, he took and agree to this, and Brer Rabbit, he got 'im a hickory split and tie 'im hard and fast to the tree. Then he took and sat down, old Brer Rabbit did, and wash his face and hands just same as you see the cats doing. Directly Mr. Lion get tired of standing there hugging the tree, and he ask Brer Rabbit what the reason he ain't keep on running, and Brer Rabbit, he up and allow that he going to stay there and take care Mr. Lion.

Directly Mr. Lion ask Brer Rabbit for to unloose 'im. Brer Rabbit say he feared. Then Mr. Lion get mighty mad, and he begun to bellow worse than one of these here bull-yearlings. He bellow so long and he bellow so loud till presently the the other critters they begun to come up for to see what the matter. 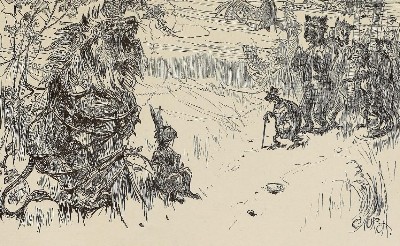 Just soon as they come up, Brer Rabbit, he took and begun to talk biggity and strut 'round, and, man — sir! When them others see that Brer Rabbit done got Mr. Lion tied up, I let you know they took and walked way 'round 'im, and it was many a long day 'fore they took and pestered old Brer Rabbit. 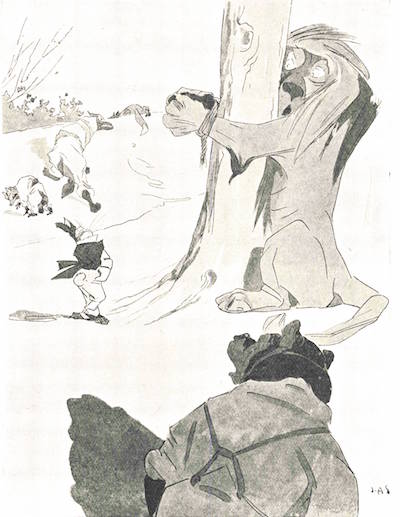