Seven Tales of Uncle Remus, 1: Mr. Crow and Brother Buzzard. The dialect version of this story was published in Dixie (December 1889, not available online), but Harris revised the story to include in Little Mr. Thimblefinger, online at Hathi Trust. Harris removed the dialect forms, and I have removed the frame; click here for notes to the story.

As near as I can remember, Brother Buzzard and Brother Crow met with each other early one morning in a big pine-tree. They howdied, but there was a sort of coolness between them on account of the fact that Brother Buzzard had been going about the neighborhood making his brags and his boasts that he could outﬂy Brother Crow. They hadn't been up in the tree very long before they began to dispute.

Brother Buzzard was not a very loud talker in those days, whatever he may be now, but Brother Crow could squall louder than a woman who has been married twenty-two years. And so there they had it, quarreling and disputing and disturbing the peace.

Well, you know the road that leads to Brag is the shortest route to Bluster. Brother Buzzard and Brother Crow were quarreling because they had been bragging, and a little more and they'd have had a regular pitched battle then and there.

"Maybe you can outﬂy me, Brother Buzzard," says Mr. Crow, "but I'llbe bound you can’t out sing me."

"I have never tried," says Brother Buzzard, says he.

"Well, suppose you try it now," says Brother Crow. "I'll go you a ﬁne suit of clothes, and a cooked hat to boot, that I can sit here and sing longer than you can," says he.

"Oh, ho!" says Brother Buzzard, "you may sing louder, but you can’t sing longer than I can," says he.

Well, they shook hands to ratify the bet, and then Brother Crow, without making any ﬂourishes, raised the tune, —
Oh, Susy, my Susy, gangloo!
Oh, Milly, my Molly, langloo!

Then Brother Buzzard ﬂung his head back and chimed in, —
Oh, Susy, my Susy, gangloo!
Oh, Milly, my Molly, langloo!

And such another racket as they made I never heard before, and have never heard since. They sat there and sang just as I told you. Brother Buzzard would stop to catch his breath and then break out, —
Oh, Susy, my Susy, gangloo!
Oh, Milly, my Molly, langloo!

And then Brother Crow would squall out, —
Oh, Susy, my Susy, gangloo!
Oh, Milly, my Molly, langloo!

They sang on until they began to get hungry, and as Brother Buzzard seemed to be the biggest and fattest of the two, everybody thought he would hold out the longest. But Brother Crow was plucky, and he sang right along in spite of the emptiness in his craw. He didn't squall as loud as he did at first, but every time Brother Buzzard sang, Brother Crow would sing, too. By and by, they both began to get very weak.

It wasn't very long after that before all Brother Crow’s family connections came flying to help him, and as soon as they found out how matters stood they brought him more victuals than he knew what to do with.

Brother Buzzard held out as long as he could, but he was obliged to give up, and since that time there has been mighty little singing in the Buzzard family.

But that isn't all. Since that time Brother Crow, who was dressed in white, has been wearing the black suit that he won from Brother Buzzard. 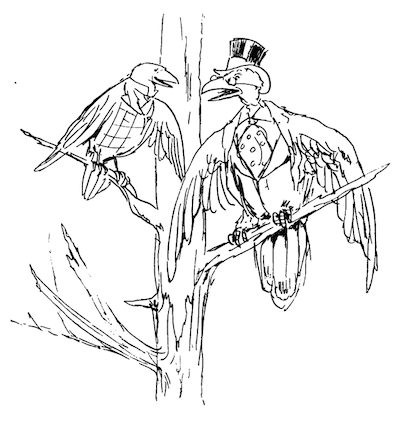 (illustration by Oliver Herford)
Posted by Laura Gibbs at 8:19 PM