C078. Brer Fox and the Wildcat

44. How Brother Fox Was Too Smart. Text Source: Nights with Uncle Remus by Joel Chandler Harris. Online at Project Gutenberg. I have removed the frame material and standardized the spelling; click here for the original spelling plus all notes to the story.


BRER FOX AND THE WILDCAT

One day when Brer Fox went calling on Miss Meadows and Miss Motts and the other gals, who should he find sitting up dar but old Brer Rabbit? Yes sir! There he was, just as sociable as you please. He was going on with the gals, and when Brer Fox dropped in they look like they was mighty tickled about something or other Brer Rabbit been saying.

Brer Fox, he look sort of dubious, he did, just like folks does when they walks up in a crowd where the others all a-giggling. He took and caught the dry grins directly. But they all howdied, and Miss Meadows, she up and say, "You'll just have to excuse us, Brer Fox, on the 'count of this here gigglement. To be sure, it monstrous dispolite for we-all for to be goin' on that a-way; but I mighty glad you come, an' I says to the gals: 'Fore the Lord, gals! There come Brer Fox, an' here we is a-gigglin' an' a-goin' on scandalous; yet it done come to mighty funny pass, if you can't run on an' laugh 'fore home folks. That just exactly what I say, an' I leave it to old Brer Rabbit an' the gals here if it ain't."

The gals, they took and join in, they did, and they make old Brer Fox feel right splimmy-splammy, and they all sat there and run on about they neighbors just like folks does these days. They sat there, they did, till after while Brer Rabbit look out towards sundown, and allow, "Now, then, folks an' friends, I pleased to say goodbye. Cloud comin' up out yonder, an' most 'fore we know it the rain'll be a-pourin' an' the grass'll be a-growin'."

Brer Fox, he see the cloud coming up, and he up and allow he expect he better be getting along hisself, 'cause he ain't want to get he Sunday-go-to-meeting clothes wet. Miss Meadows and Miss Motts, and the gals, they want 'em to stay, but both of them there critters was mighty feared of getting their foots wet, and after while they put out.

While they was going down the big road, jawing at one another, Brer Fox, he took and stop right quick, and allow, "Run here, Brer Rabbit! Run here! If my eye ain't deceive me here the signs where Mr. Dog been along, an' more than that they are right fresh."

Brer Rabbit, he sidle up and look. Then he allow, "That there track ain't never fit Mr. Dog foot in the round world. What make it more bindin'," says he, "I done gone and been acquainted with the man what make that track, too long ago to talk about," says he.

Brer Rabbit, he laugh like he making light of something or other.

"If I ain't make no mistakes, Brer Fox, the poor critter what make that track is Cousin Wildcat; no more an' no less."

"He just about yo' heft, Brer Fox." Then Brer Rabbit make like he talking with hisself. "Tut, tut, tut! It mighty funny that I should run up on Cousin Wildcat in this part of the world. To be sure, to be sure! Many and many's the time I see my old Grandaddy kick an' cuff Cousin Wildcat, till I get sorry about 'im. If you want any fun, Brer Fox, right now the time to get it."

Brer Fox up and ask, he did, how he gonna have any fun.

Brer Fox, he sort of scratch he ear, and allow, "Eh-eh, Brer Rabbit, I afeared. He track too much like Mr. Dog."

Brer Rabbit just sat right flat down in the road, and holler and laugh. He allow, says he, "Shoo, Brer Fox! Who'd've thunk you was so scary? Just come look at this here track right close. Is there any sign of claw anywheres?"

Brer Fox pleased to agree that there weren't no sign of no claw.

Brer Rabbit say, "Well, then, if he ain't got no claw, how he going to hurt you, Brer Fox?"

"What goin' on with he tooths, Brer Rabbit?"

Brer Fox took and took another good look at the tracks, and then him and Brer Rabbit put out for to follow 'em up. They went up the road, and down the lane, and 'cross the turnip patch, and down a drain and up a big gully. Brer Rabbit, he done the tracking, and every time he find one, he up and holler, "Here another track, and no claw there! Here another track, and no claw there!"

They kept on and kept on, till by and by they run up with the critter. Brer Rabbit, he holler out mighty biggity, "Heyo there! What you doin'?"

The critter look 'round, but he ain't saying nothing. Brer Rabbit allow, "Oh, you needn't to look so sullen! We'll make you talk 'fore we are done 'long with you! Come, now! What you doin' out there?"

The critter rub hisself against a tree just like you see these here house cats rub against a chair, but he ain't saying nothing.

Brer Rabbit holler, "What you come pesterin' 'long with us for, when we ain't been a-pesterin' you? You got the conceit that I don't know who you is, but I does. You are the same old Cousin Wildcat what my granddaddy used to kick an' cuff when you refuse to respond. I let you know I got a better man here than what my granddaddy ever is been, an' I bound you he'll make you talk. That what I bound you."

The critter lean more harder against the tree, and sort of ruffle up he bristle, but he ain't saying nothing.

Brer Fox, he sort of dubious, but he start towards the critter. Old Cousin Wildcat walk all 'round the tree, rubbing hisself, but he ain't saying nothing.

Brer Rabbit, he holler, "Just walk right up an' slap 'im down, Brer Fox—the audacious villain! Just hit 'im a souvenir, and if he dares to run, I bound you I'll catch 'im."

Brer Fox, he went up little nigher. Cousin Wildcat stop rubbing on the tree, and sat up on he behind legs with he front paws in the air, and he balance hisself by leaning against the tree, but he ain't saying nothing.

Brer Rabbit, he squall out, he did, "Oh, you needn't to put up yo' hands an' try to beg off. That the way you fool my old granddaddy; but you can't fool we-all. All yo' sittin' up an' beggin' ain't goin' to help you. If you are so humble as all dat, what make you come pesterin' 'long of we-all? Hit 'im a clip, Brer Fox! If he run, I'll catch 'im!" 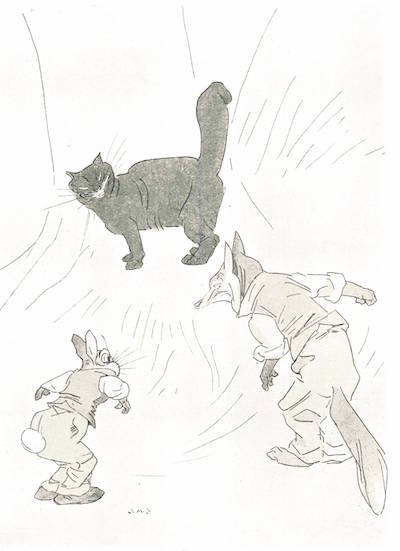 Brer Fox see the critter look so mighty humble, sitting up there like he begging off, and he sort of take heart. He sidle up towards 'im, he did, and just as he was making ready for to slap 'im old Cousin Wildcat drawed back and fetch Brer Fox a wipe 'cross the stomach. That there Cousin Wildcat critter fetch Brer Fox a wipe 'cross the stomach, and you might've heard 'im squall from here to Harmony Grove. Little more and the critter would've tore Brer Fox in two.

Whence the critter made a pass at 'im, Brer Rabbit knew what going to happen, yet all the same he took and holler, "Hit 'im again, Brer Fox! Hit 'im again! I'm a-backin' you, Brer Fox! If he dares to run, I'll in about cripple 'im—that I will. Hit 'im again!"

All this time whiles Brer Rabbit going on this a-way, Brer Fox, he was a-squatting down, holding he stomach with both hands and just a-moaning, "I'm ruined, Brer Rabbit! I'm ruined! Run fetch the doctor! I'm teetotally ruined!"

About that time, Cousin Wildcat, he took and took a walk. Brer Rabbit, he make like he astonished that Brer Fox is hurted. He took and examine the place, he did, and he up and allow, "It look like to me, Brer Fox, that that audacious villain took and struck you with a reapin'-hook."

With that Brer Rabbit lit out for home, and when he get out of sight, he took and shook he hands just like cat does when she get water on 'er foots, and he took and laugh and laugh till it make 'im sick for to laugh.