3: Brother Rabbit Causes Brother Fox to Lose His Hide. Text Source: Uncle Remus and the Little Boy by Joel Chandler Harris. Online at Hathi Trust. I have removed the frame material and standardized the spelling; click here for notes to the story.

Well, Brer Lion, he scramble out just as hard as he can, and that weren't quick enough for to save his wool. And neither was it quick enough, for to keep him from being mighty sore in a abundance of places here and there on his hide. He went home, he did, and took to his bed, and he stay there till he get so that he can move about without squalling. 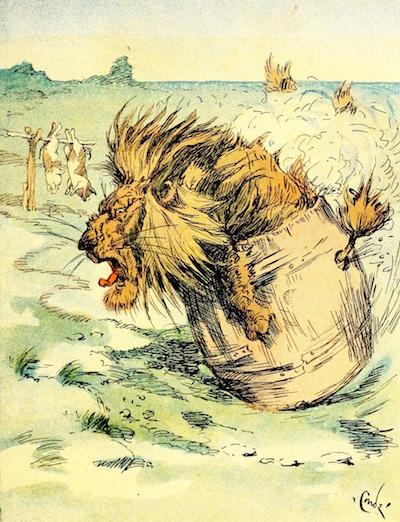 In them times, he was the king of the critters, and whiles he was laying there in bed they all call on him for to see how he getting on. They all pay him visits excepting old Brer Rabbit; he ain't gone to the house, but he went nigh enough to find out that Brer Fox been telling some mighty mean tales about him.

When the other critters hear Brer Fox running Brer Rabbit down, and see that Brer Lion was willing for to listen at him, they all join in and say the worse they can; and what they ain't know they make up. Everywhere he go, Brer Rabbit hear about the talk they been having, and some of it was so bad that it fairly make his ears burn. Then one day he hear tell that Brer Lion, being the King of the critters, had told Brer Fox for to catch him and fetch him there where Brer Lion live at.

This make Brer Rabbit sit down and study. He know Brer Fox can't catch him, but he study how he going to get even with him. He study, and study, till by and by, one day, he put out for to see how Brer Lion getting on. 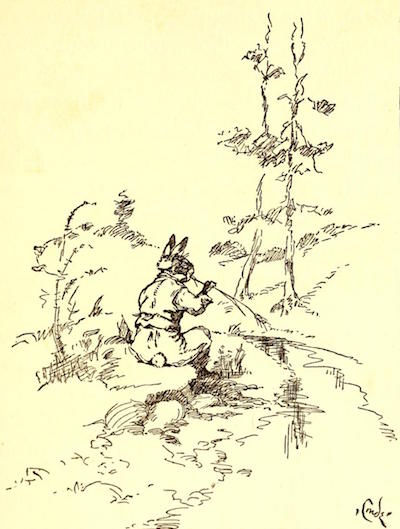 The road he went took him right by Brer Fox house. Brer Fox was sitting on the front porch when Brer Rabbit went by, and he look like he astonished; but he ain't say nothing. Brer Rabbit ain't turn his head, 'cause he know'd that Brer Fox'd follow along after.

He went on, he did, till he get to Brer Lion's house. He rap on the door, and Brer Lion groan and growl, and say, "Come in." So said, so done.

Brer Lion watch Brer Rabbit mighty hard, and by and by he say, "What's all this I hear?" 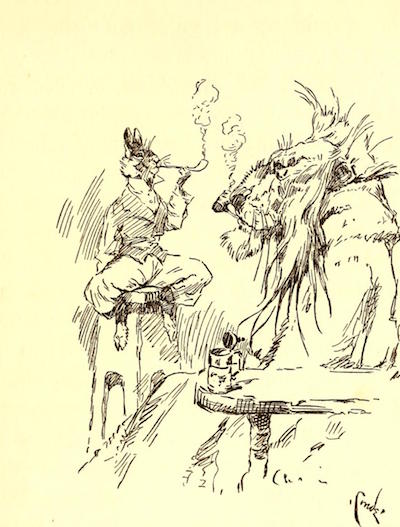 "You'll have to tell me," says old Brer Rabbit, "'cause I been off on a long journey. Instead of callin' on you and sittin' 'round here, a-doin' of no good whatsomever, I been tryin' for to find somethin' that'd cure you."

"Don't tell me 'bout it," says Brer Lion, says he. "Everybody been tellin' me what'd cure me, an' I ain't cured yet; I'm worse off than before!"

Brer Rabbit say, "I could've come just as much as the rest of the critters, an' it would've done just as much good. But I know'd," says he, "that when anybody gets scalded with milk-warm water, there's somethin' the matter with 'em sure enough. So I took an' went off where Mammy-Bammy-Big-Money live at, an' I ask her what the matter when some folks can get scalded in milk-warm water. She took off her left slipper, shook out the pebbles an' count 'em as they fell out, an' say the onliest way for to work a cure is to poultice the burns with the fresh hide of his best friend. I ask who it is," says old Brer Rabbit, says he, "an' she say he got sharp nose, short ears, slim legs, and a bushy tail."

Brer Lion ain't wait a minute; he call to some of the critters what hanging 'round, and he say, "Fetch me the hide of Brer Fox!"

What then? The critters, they fetch it.