10: How the Birds Talk. Text Source: Daddy Jake, The Runaway by Joel Chandler Harris. Online at Hathi Trust. I have removed the frame material and standardized the spelling; click here for notes to the story. There is a preamble where Uncle Remus imitates the calls of the two birds shown in the illustrations, and after completing the story, he describes the calls of the barnyard fowl also. 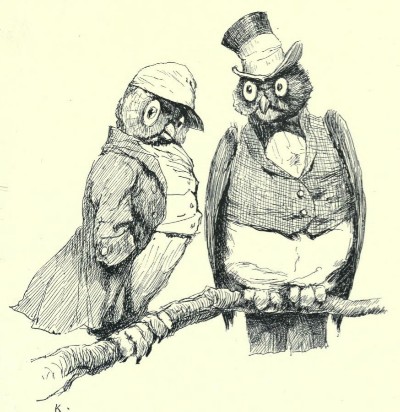 
When Becky's Bill was growing up, he went frolicking around, and one night he come through the Two-Mile Swamp. He come along, he did, and the first news you know a great big old owl flewed up in a tree and snap he bill just like somebody cracking a whip.

Becky's Bill make like he ain't take no notice, but he sort of mend he gait.

Becky's Bill move on — he make like he ain't hear nothing.

By that time Becky's Bill done get sort of scared, and he stop and say, "Well, sir, enduring of the week, mammy, she cooks, but on Sundays, and more specially if they got company, then old Aunt Dicey, she cooks."

Becky's Bill, he take off he hat, he did. and allow, says he, "Well, sir, it's just like I tell you. More in generally enduring of the week, mammy, she cooks, but on Sundays, more specially when they got company, old Aunt Dicey, she cooks."

Old Mr. Owl, he keep asking, and Becky's Bill keep on telling till, by and by, Becky's Bill, he got scared, and tired, and mad, and then he leapt out from there and he run home like a quarter-horse; and now if you get him in that swamp you got to go along with him.