Seven Tales of Uncle Remus, 2: Mr. Goat's Short Tail. The dialect version of this story was published in Dixie (December 1890; not available online), but Harris revised the story to include in Little Mr. Thimblefinger, online at Hathi Trust. Harris removed the dialect forms and I have removed the frame material; click here for notes to the story.

One afternoon Mr. Billy-Goat and Mr. Dog were walking arm in arm along the road, talking and laughing in a sociable way, when all of a sudden a big rain came up. Mr. Billy-Goat said he was mighty sorry he left his parasol at home, because the rain was apt to make his horns rust. Mr. Dog shook himself and said he didn't mind water, because when he got wet the fleas quit biting. But Mr. Billy-Goat hurried on and Mr. Dog kept up with him until they came to Mr. Wolf’s house, and they ran into the front porch for shelter.

The door was shut tight, but Mr. Billy Goat had on his high-heel shoes that day, and he made so much noise as he tramped about that Mr. Wolf opened his window and looked out. When he saw who it was, he cried out, "Hallo! This is not a nice day to pay visits, but since you are here, you may as well come in out of the wet."

But Mr. Dog shook his head and flirted up dirt by scratching on the ground with his feet. He had smelled blood.

Mr. Billy-Goat saw how Mr. Dog acted, and he was afraid to go in. So he shook his horns.

"You’d just as well come in and sit by the fire," said Mr. Wolf, unlatching the door.

But Mr. Dog and Mr. Billy-Goat thanked him kindly, and said they didn't want to carry mud into the house. They said they would just stand in the porch till the shower passed over.

Then Mr. Wolf took down his fiddle, tuned it up, and began to play. In his day and time few could beat him playing the fiddle. And this time he played his level best, for he knew that if he could start Mr. Billy-Goat to dancing he'd have him for dinner. That's because if Mr. Billy Goat began to dance he would be likely to dance until he got tired, and then it would be an easy matter for Mr. Wolf to outrun him.

Well, Mr. Wolf kept on playing the fiddle, but Mr. Billy-Goat didn't dance. Not only that, he kept so near the edge of the porch that the rain drifted in on his horns and ran down his long beard. But he kept his eye on Mr. Wolf. After playing the fiddle till he was tired, Mr. Wolf asked, "How do you get your meat, my young friends?"

Mr. Dog said he depended on his teeth, and Mr. Billy-Goat, thinking to be on the safe side, said he also depended upon his teeth.

And with that he dropped his fiddle and jumped at Mr. Billy-Goat. But he knocked the broom down and the handle tripped him. It was all very sudden, but by the time Mr. Wolf had recovered himself Mr. Billy-Goat and Mr. Dog had gone a considerable distance.

They ran and ran until they came to a big creek. Mr. Billy-Goat asked Mr. Dog how he was going to get across.

By this time they had arrived at the bank of the creek, and they could hear Mr. Wolf coming through the woods. They had no time to lose. Mr. Dog looked around on the ground, gathered some jan-weed, yan-weed, and tan-weed, rubbed them together, and squeezed a drop of the juice on Mr. Billy-Goat’s horns. He had no sooner done this than Mr. Billy-Goat was changed into a white rock. Then Mr. Dog leaped into the creek and swam across.

When Mr. Dog arrived safely on the other side he cried out, "Aha! you are afraid! You've drowned poor Mr. Billy-Goat, but you are afraid of me. I dare you to fling a rock at me!"

This made Mr. Wolf so mad that he seized the white rock and threw it at Mr. Dog with all his might. It fell near Mr. Dog, and instantly became Mr. Billy-Goat again.

But in falling a piece was broken off, and it happened to be Mr. Billy-Goat’s tail. Ever since then he has had a very short tail. 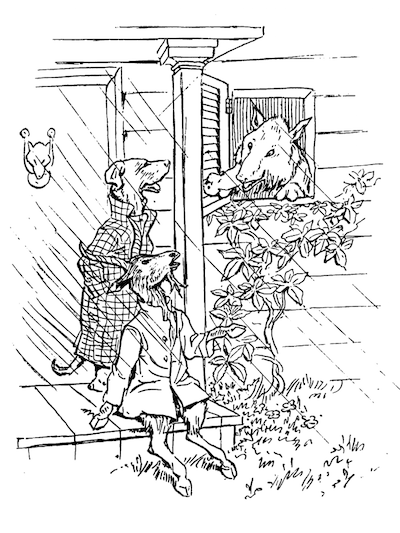