24. How Brother Rabbit Got the Meat. Text Source: Nights with Uncle Remus by Joel Chandler Harris. Online at Project Gutenberg. I have removed the frame material and standardized the spelling; click here for the original spelling plus all notes to the story.

There weren't no man amongst the critters what can stand right flat-footed and work he mind quick like Brer Rabbit. He took and tie the rock on the string, instead of the meat, and he pursue long after it, he did, till Mr. Man turn a bend in the road, and then Brer Rabbit, he just lit out from there—terbuckity-buckity, buck-buck-buckity! and it weren't long before he took and catch up with Brer Fox. They took the meat, they did, and carried it way off in the woods, and laid it down on a clean place on the ground.

Then Brer Fox smack he mouth and look at the meat more closer, and up and allow, "Brer Rabbit, it's lamb!" 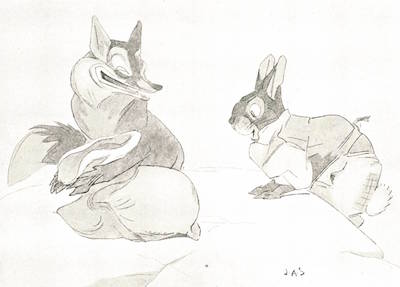 Then Brer Rabbit, he took and gnaw off a hunk, and he shut both eyes, and chew and taste, and taste and chew. Then he smack he mouth, and up and allow, "Brer Fox, it's shote!"

"Brer Rabbit, you foolin' me!"

They taste and they dispute, and they dispute and they taste. After while, Brer Rabbit make like he want some water, and he rush off in the bushes, and directly here he come back wiping he mouth and clearing up he throat.

Then Brer Fox he want some water sure enough. "Brer Rabbit, where you find the spring?"

"Cross the road, an' down the hill an' up the big gully."

Whiles all this here going on, Brer Rabbit he took and grabble a hole in the ground, he did, and in that hole he hid the meat. After he get it good and hid, he took and cut him a long keen hickory, and after so long a time, when he hear Brer Fox coming back, he got in a clump of bushes, and took that hickory and let in on a sapling, and every time he hit the sapling, he'd squall out, Brer Rabbit would, just like the patter-rollers had him.

After so long a time, the racket sort of die out, and seem like Mr. Man was dragging Brer Rabbit off. This make Brer Fox feel mighty skittish. By and by Brer Rabbit come a-cally-hooting back just a-hollering, "Run, Brer Fox, run! Mr. Man say he going to carry that meat up the road to where he son is, and then he's a-comin' back after you. Run, Brer Fox, run!"