61. Why Mr. Dog Runs Brother Rabbit. Text Source: Nights with Uncle Remus by Joel Chandler Harris. Online at Project Gutenberg. I have removed the frame material and standardized the spelling; click here for the original spelling plus all notes to the story.

There was one time when old Brer Rabbit was pleased to go to town after something or other for his family, and he most ashamed to go 'cause his shoes done wore teetotally out. Yet he pleased to go, and he put just as good face on it as he can, and he take down he walking-cane and set out just as big as the next one.

Well, then, old Brer Rabbit go on down the big road till he come to the place where some folks been camp out the night before, and he sat down by the fire, he did, for to warm his foots, 'cause them mornings was sort of cold. He sat there and look at his toes, and he feel mighty sorry for hisself.

Well, then, he sat there, he did, and it weren't long 'fore he hear something or other trotting down the road, and he took and look up and here come Mr. Dog a-smelling and a-snuffing 'round for to see if the folks left any scraps by their camp-fire. Mr. Dog was all dress up in his Sunday-go-to-meeting clothes, and more than that, he had on a pair of brand new shoes.

Well, then, when Brer Rabbit see them there shoes he feel mighty bad, but he ain't let on. He bow to Mr. Dog mighty polite, and Mr. Dog bow back, he did, and they pass the time of day, 'cause they was old acquaintances. Brer Rabbit, he say, "Mr. Dog, where you going all fix up like this?"

"I going to town, Brer Rabbit; where you going?"

"I thought I go to town myself for to get me new pair shoes, 'cause my old ones done wore out and they hurts my foots so bad I can't wear 'em. Them mighty nice shoes what you got on, Mr. Dog; where you get 'em?"

"They fits you mighty slick, Mr. Dog, and I wish you be so good as to lemme try one of 'em on."

Brer Rabbit talk so mighty sweet that Mr. Dog sat right flat on the ground and took off one of the behind shoes, and loaned it to Brer Rabbit. Brer Rabbit, he lope off down the road and then he come back. He tell Mr. Dog that the shoe fit mighty nice, but with just one of 'em on, it make him trot crank-sided.

Well, then, Mr. Dog, he pull off the other behind shoe, and Brer Rabbit trot off and try it. He come back, he did, and he say, "They mighty nice, Mr. Dog, but they sort of rears me up behind, and I don't know exactly how they feels." 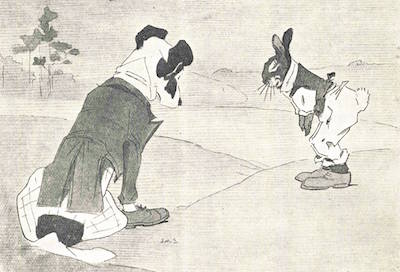 This make Mr. Dog feel like he want to be polite, and he take off the before shoes, and Brer Rabbit put 'em on and stomp his foots, and allow, "Now that sort of feel like shoes;" and he rack off down the road, and when he get where he ought to turn 'round, he just lay back he ears and keep on going; and it weren't long 'fore he get out of sight.