9. Mr. Benjamin Ram and His Wonderful Fiddle. Text Source: Nights with Uncle Remus by Joel Chandler Harris. Online at Project Gutenberg. I have removed the frame material and standardized the spelling; click here for the original spelling plus all notes to the story.

This here Mr. Benjamin Ram, was one of these here ole-timers. They tells me that he was a fiddler from away back yonder—one of them there kind of fiddlers what can't get the tune down fine unless they pats their foot. He stay all by he own-alone self way out in the middle of a big new-ground, and he such a handy man for to have at a frolic that the other critters like him mighty well, and when they took a notion for to shake their foot, which the notion took and struck 'em every once in a while, nothing'd do but they must send for old man Benjamin Ram and he fiddle; and they do say that when he square hisself back in a chair, and get in a weaving way, he can just snatch them old-time tunes from who lay the rail. And then, when the frolic was done, they'd all fling in, them other critters would, and fill up a bag of peas for old Mr. Benjamin Ram for to carry home with him.

One time, just about Christmas, Miss Meadows and Miss Motts and the gals, they up and say that they'd sort of give a blowout, and they got word to old man Benjamin Ram which they expected him for to be on hand. When the time done come for Mr. Benjamin Ram for to start, the wind blow cold and the cloud begun to spread out across the elements—but no matter for that; old man Benjamin Ram took down he walking-cane, he did, and tie up he fiddle in a bag, and set out for Miss Meadows. He thunk he know the way, but it keep on gitting colder and colder, and more cloudy, till by and by, first news you know, old Mr. Benjamin Ram done lose the way. If he'd've kept on down the big road from the start, it might've been different, but he took a nigh-cut, and he ain't get far before he done lost sure enough. He go this a-way, and he go that a-way, and he go the other way, yet all the same he was done lost.

Some folks would've sat right flat down where they was and study out their way, but old man Benjamin Ram ain't got wrinkle on he horn for nothing, 'cause he done got the name of old Billy Hardhead long before that. Then again, some folks would've stop right still in their tracks and holler and bawl for to see if they can't roust up some of the neighbors, but old Mr. Benjamin Ram, he just stick he jowl in the wind, he did, and he march right on just exactly like he know he ain't going the wrong way. He keep on, but it weren't long before he begun to feel right lonesome, more 'specially when it come up in he mind how Miss Meadows and the gals and all the company be pleased to do the best they can without any fiddling; and it kind of make he marrow get cold when he study about how he got to sleep out there in the woods by hisself.

Yet, all the same, he keep on till the dark begun to drop down, andthen he keep on still, and by and by he come to a little rise where there was a clay-gall. When he get there he stop and look 'round, he did, and 'way off down in the holler, there he see a light shining, and when he see this, old man Benjamin Ram took he foot in he hand, and make he way towards it just like it the very place what he been hunting. It weren't long before he come to the house where the light is, and, bless you soul, he don't make no bones of knocking.

Then somebody holler out, "Who that?'

"I'm Mr. Benjamin Ram, and I done lose the way, and I come for to ask you if you can't take me in for the night," says he.

In common, old Mr. Benjamin Ram was a mighty rough-and-spoken somebody, but you better believe he talk monstrous polite this time. 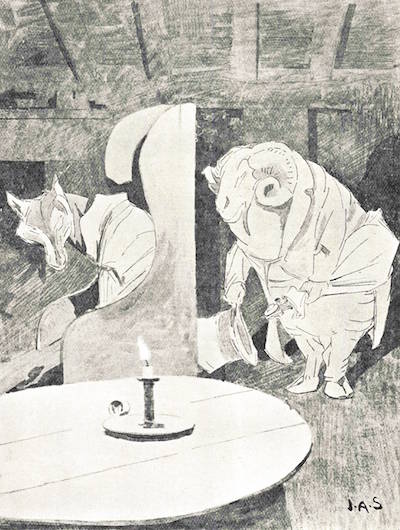 Then someone on the other side of the door ask Mr. Benjamin Ram for to walk right in, and with that he open the door and walk in, and make a bow like fiddling folks does when they goes in company; but he ain't no sooner make he bow and look 'round till he begun to shake and shiver like he done been strucken with the swamp-ague, 'cause, sitting right there before the fire was old Brer Wolf, with his toothies showing up all white and shiny like they was brand new. if old Mr. Benjamin Ram ain't been so old and stiff I bound you he'd've broke and run, but almost before he had time for to study about getting away, old Brer Wolf done been jump up and shut the door and fasten her with a great big chain.

Old Mr. Benjamin Ram he know he in for it, and he took and put on a bold face as he can, but he just naturally hone for to be lost in the woods some more. Then he make another low bow, and he hope Brer Wolf  and all his folks is well, and then he say, says he, that he just drop in for to warm hisself, and inquire of the way to Miss Meadows', and if Brer Wolf be so good as to set him in the road again, he be off pretty soon and be much obliged in the bargains.

"To be sure, Mr. Ram," says Brer Wolf, says he, whiles he lick he chops and grin; "just put yo' walkin'-cane in the corner over there, and set yo' bag down on the floor, and make yo'self at home," says he. "We ain't got much," says he, "but what we is got is yourn whiles you stays, an' I bound we'll take good care of you," says he; and with that Brer Wolf laugh and show his toothies so bad that old man Benjamin Ram come mighty nigh having another ague.

Then old Miss Wolf, she talk out loud, so Mr. Benjamin Ram can hear, "To be sure I'll fix him some supper. We are 'way off here in the woods, so far from company that goodness knows I'm mighty glad to see Mr. Benjamin Ram." 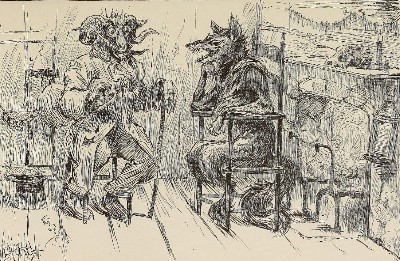 Then Mr. Benjamin Ram hear old Miss Wolf whetting her knife on a rock—shirrah! shirrah! shirrah!—and every time he hear the knife say shirrah! he know he that much nigher the dinner-pot. He know he can't get away, and whiles he sitting there studying, it come across he mind that he just might as well play one more tune on he fiddle before the worse come to the worse. With that he untie the bag and take out the fiddle, and begun to tune her up—plink, plank, plunk, plink! plunk, plank, plink, plunk!

When old Miss Wolf hear that kind of fuss, course she don't know what is it, and she drop her knife and listen. Old Mr. Benjamin Ram ain't know this, and he keep on tuning up—plank, plink, plunk, plank! Then old Miss Wolf, she took and hunch Brer Wolf with her elbow, and she say, says she, "Hey, old man! What that?" 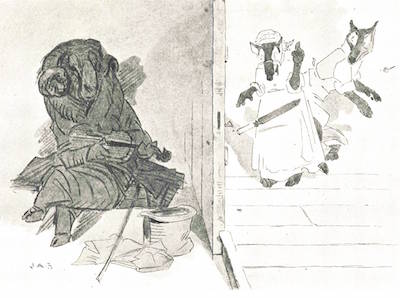 Then both of 'em cock up their ears and listen, and just about that time old Mr. Benjamin Ram he sling the butt of the fiddle up under he chin, and struck up one of them old-time tunes. It sort of went like that there song about "Sheep shell corn with the rattle of his horn,' and yet it might've been that there other one about "Roll the key, ladies, roll them keys."

Brer Wolf and old Miss Wolf, they listen and listen, and the more what they listen the scareder they get, till by and by they took to their heels and make a break for the swamp at the back of the house just like the patter-rollers was after 'em.

Next morning he was up and stirring monstrous soon, and he put out from there, and he find the way to Miss Meadows' time enough for to play at the frolic. When he get there, Miss Meadows and the gals, they run to the gate for to meet him, and this one took he hat, and that one took he cane, and the other one took he fiddle, and then they up and say, "Lord, Mr. Ram! Where the name of goodness is you been? We so glad you come. Stir 'round here, folks, and get Mr. Ram a cup of hot coffee."

They make a mighty big to-do about Mr. Benjamin Ram, Miss Meadows and Miss Motts and the gals did, but 'twixt you and me and the bedpost, they'd've had their frolic whether the old chap was there or not, 'cause the gals done make arrangerments with Brer Rabbit for to pat for 'em, and in them days Brer Rabbit was a patter, man. He most surely was.