53. Brother Rabbit Takes a Walk. Text Source: Nights with Uncle Remus by Joel Chandler Harris. Online at Project Gutenberg. I have removed the frame material and standardized the spelling; click here for the original spelling plus all notes to the story.

I mind me of one time when the the other critters all get the laugh on 'im, and en they make 'im feel sort of ashamed. It seem like that there was some kind of botherment amongst the critters and word went out that they all got to meet together somewheres and untangle the tanglements.

When the time come, they was all of 'em there, and they held their confab right along. All of 'em got something to say, and they talk there, they did, just like they was paid for talking. They all had their plans, and they jabbered just like folks does when they call theyself together.

It come about that Mr. Dog get a seat right close by Brer Rabbit, and when he open he mouth for to say something, he tooths look so long and so strong, and they shine so white, that it feel mighty curious.

Mr. Dog, he'd say something; Brer Rabbit, he'd jump and dodge. Mr. Dog, he'd laugh; Brer Rabbit, he'd dodge and jump. It keep on this a-way, till every time Brer Rabbit'd dodge and jump, the the other critters they'd slap their hands together and break out in a laugh. Mr. Dog, he took and took a notion that they was laughing at him, and this make 'im so mad that he begun to growl and snap right smartually, and it come to that pass that when Brer Rabbit'd see Mr. Dog make a motion for to say a speech, he'd just drop down and get under the chair. 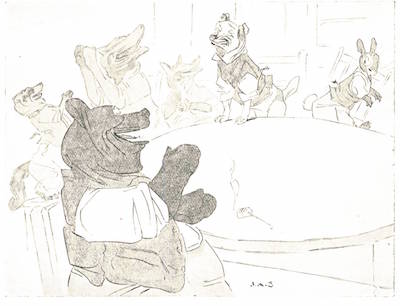 Course this make 'em laugh worse and worse, and the more they laugh the madder it make Mr. Dog, till by and by he get so mad he fairly howl, and Brer Rabbit he sat there, he did, and shook like he got an ague.

After while Brer Rabbit get sort of on the other side, and he make a speech and say there ought to be a law for to make all the critters what got tooths catch and eat their vittles with their claws. All of 'em agree to this excepting Mr. Dog, Brer Wolf, and Brer Fox.

Brer Rabbit got a kind of sneaking notion that the critters ain't going do like he want 'em to do, and he allow to Brer Wolf that he expect the best way for to do is to get all the critters to agree for to have Mr. Dog mouth sewed up, 'cause he tooths look so venomous; and Brer Wolf say they'll all go in for that.

Sure 'nough, when the day done come, Brer Rabbit he get up and say that the best way to do is have Mr. Dog mouth sewed up so he tooths won't look so venomous. They all agree, and then Mr. Lion, setting up in the arm-chair, he ask who gonna do the sewing.

Then they all up and allow that the man what want the sewing done, he the man for to do it, 'cause then he'll know it done been done right.

Brer Rabbit, he sort of study, and then he allow, "I ain't got no needle."

Brer Bear, he sort of feel in the flap of he coat collar, and he allow, "Here, Brer Rabbit; here a great big one!"

Brer Rabbit, he sort of study again, and then he allow, "I ain't got no thread."

Brer Bear, he took and pull a raveling from the bottom of he waistcoat, and he allow, "Here, Brer Rabbit; here a great long one!"

If it had've been anybody in the round world he'd've begun to feel sort of ticklish, but old Brer Rabbit, he just took and lay he finger 'cross he nose, and allow, "Just hold 'em there for me, Brer Bear, and I'll be much obliged to you. It's just about my time of day for to take a walk!"

Some folks say the critters had the grins on Brer Rabbit about that time; but I tell you right point-blank they ain't grin much when they hear Brer Rabbit say that.