18. A Dream and a Story. Text Source: Nights with Uncle Remus by Joel Chandler Harris. Online at Project Gutenberg. I have removed the frame material and standardized the spelling; click here for the original spelling plus all notes to the story. At the start of the frame, Uncle Remus tells the little boy about dreaming of the animals and how they play music in his dreams, as shown in this illustration: 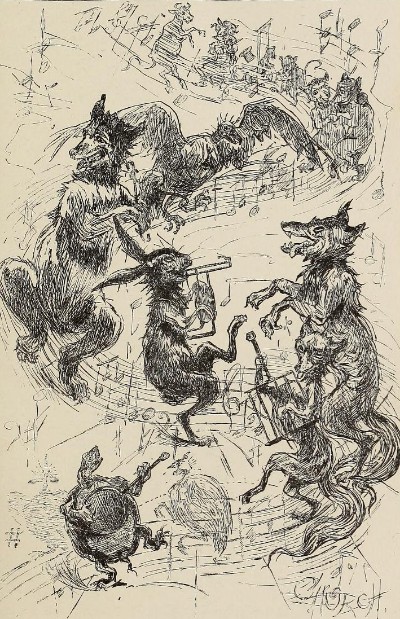 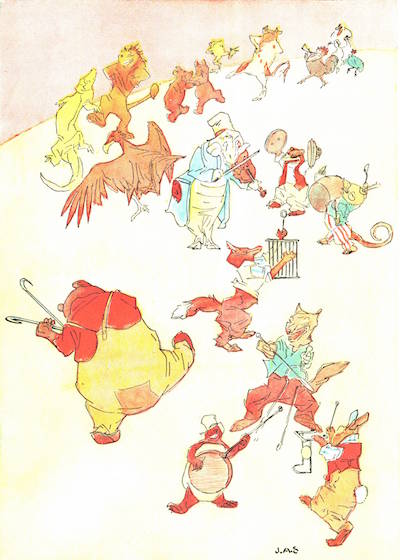 Well, then, one day, Brer Wolf and Brer Fox they got to disputing along of one another. Brer Wolf, he took and abuse Brer Fox 'cause Brer Fox let Brer Rabbit fool him, and then Brer Fox, he took and quarrel back at Brer Wolf, 'cause Brer Wolf let old man Rabbit likewise fool him. They keep on disputing and disputing, till by and by they clinch, and Brer Wolf, being the biggest man, it wouldn't've been long before he'd've wool Brer Fox, but Brer Fox, he watch he chance, he did, and he give him leg bail; he jerk loose from Brer Wolf, Brer Fox did, and, gentlemens, he just mosey through the woods.

Brer Wolf, he took after him, he did, andthere they had it, and Brer Wolf push Brer Fox so close, that the onliest way Brer Fox can save he hide is to find a hole somewhere, and the first hollow tree that he come 'cross, into it he dove.

By and by, Brer Wolf, he took and gather up a whole lot of chunks, and rocks, and sticks, and then he took and fill up the hole what Brer Fox went in so Brer Fox can't get out.

Whiles this was going on, old Brer Turkey Buzzard, he was sailing 'round 'way up in the elements, with he eye peel for business, and it weren't long before he glance lit on Brer Wolf, and he allow to hisself, says he, "I'll just sort of flop down," says he, "and look into this, 'cause if Brer Wolf hiding he dinner there with the expectation of finding it there when he come back, then he done gone and put it in the wrong place," says he.

Course Brer Buzzard sort of feel like he got interest in matters like this, and he holler back, "Who dead now, Brer Wolf?"

"One of yo' acquaintance, which he name Brer Fox, Brer Buzzard."

"He ain't dead yet, but he won't last long in here, Brer Buzzard."

Brer Wolf, he keep on, he did, till he done stop up the hole good, and then he brush the trash off of his clothes, and put out for home. Brer Turkey Buzzard, he sat up there, he did, and untangle his tail feathers, and listen and listen, but Brer Fox, he keep dark, and Brer Buzzard ain't hear nothing. Then Brer Buzzard, he flop he wings and sail away.

By and by, next day, bright and early, here he come back, and he sail all 'round and 'round the tree, but Brer Fox he lay low and keep dark, and Brer Buzzard ain't hear nothing. After while, Brer Buzzard he sail 'round again, and this time he sing, and the song what he sing is this here:
Boo, boo, boo, my filler-mer-loo,
Man out here with news for you!

Then he sail all 'round and 'round another time and listen, and by and by he hear Brer Fox sing back:
Go 'way, go 'way, my little jug of beer,
The news you bring, I heard last year.

So, then, when Brer Buzzard hear Brer Fox sing back, he allow he ain't dead, and with that, Brer Buzzard, he sail off and attend to he other business.

Next day back he come, and Brer Fox, he sing back, he did, just as lively as a cricket in the ashes, and it keep on this way till Brer Fox stomach begun to pinch him, and then he know that he got to study up some kind of plans for to get out from there.

Another day pass, and Brer Fox, he took and lay low, and it keep on that a-way till it look like to Brer Fox, pent up in there, he must surely perish.

It went on this a-way, till just before he got the hole uncovered, Brer Fox, he break out he did, and grab Brer Buzzard by the back of the neck. There was a kind of scuffle amongst 'em, but it weren't for long, and that was the last of old Brer Turkey Buzzard.