57. Mr. Lion's Sad Predicament. Text Source: Nights with Uncle Remus by Joel Chandler Harris. Online at Project Gutenberg. I have removed the frame material and standardized the spelling; click here for the original spelling plus all notes to the story.

Brer Rabbit look all about for see if the Buckra been coming. He say, "Me have plenty reason, Brer Lion. The Buckra Man shoot with one gun. He raise 'em to he eye, he point 'em straight towards you; he say bang! One time, he say bang! Two time: then you is been get hurt through the head and cripple in the leg."

Lion, he shake he head; he say, "Me no scared the Buckra Man. I grab the gun. I catch 'em for me breakfast."

Brer Rabbit, he laugh till he can laugh no more. He say, "How come you scared the Partridge? He fly when you wink your eye; he run and he fly. Hoo! Me no scared about them Partridge. Me scared the Buckra."

The Lion, he look all about for see if the Partridge been coming. He say, "I scared the Partridge. When me been walk in the bushside, the Partridge he hold right still upon the ground till me come there-there, and then he fly up — fud-d-d-d-d-d-e-e! When he is been do that me is get scared very bad.'"

Brer Rabbit, he holler and laugh; he say, "Me no scared the Partridge. I been run them up every day. They no hurt you, Brer Lion. You hold your eye upon the Buckra Man. The Partridge, he no have no gun for shoot you with; the Buckra, he is been have one gun two time. Let the Partridge fly, Brer Lion; but when the Buckra Man come you best keep in the shady side. I tell you this, Brer Lion."

The Lion, he stand 'em down he no scared the Buckra Man, and by and by he say good-bye; he say he gonna look for the Buckra Man for true.

So long time, Brer Rabbit is been hear one big fuss in the timber; he hear the Lion voice. Brer Rabbit follow the fuss till he is been come upon the Lion where he laying upon the ground. The Lion, he is moan; he is groan; he is cry. He have hole in he head, one, two, three hole in he side; he holler, he groan. Brer Rabbit, he ask 'em howdy. He say, "Ki, Brer Lion, why you have find so much trouble?" 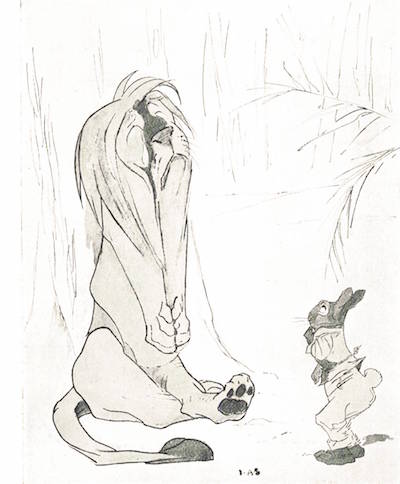 Brer Rabbit been hold he head upon one side; he look scared. He say, "Ki, Brer Lion! I no know the Partridge is so bad like that. I think he fly away and no hurt you. Shuh-shuh! When I see them Partridge I must get upon other side for keep me hide whole." The Lion, he groan, he moan, he cry. Brer Rabbit, he say, "The Partridge, he very bad; he must been borrow the Buckra Man gun."

The Lion, he groan, he cry, "He no the Partridge none at all. The Buckra Man is been stand way off and shoot me with he gun. Ow, me Lord!"