10. Brother Rabbit's Riddle. Text Source: Nights with Uncle Remus by Joel Chandler Harris. Online at Project Gutenberg. I have removed the frame material and standardized the spelling; click here for the original spelling plus all notes to the story.

The time come when old Brer Rabbit begun to put this and that together, and the notion strike him that he better be home looking after the interests of he family, instead of traipsing and trolloping 'round to all the frolics in the settlement. He took and study this in he mind till by and by he sat out determined for to earn he own livelihoods, and then he up and lay off a piece of ground and plant him a tater-patch.

Brer Fox, he see all this here going on, he did, and he allow to hisself that he expect Brer Rabbit rashfulness done been subdued 'cause he scared, and then Brer Fox make up his mind that he going to pay Brer Rabbit back for all he deceitfulness. He start in, Brer Fox did, and from that time forward he aggravate Brer Rabbit about he tater-patch. One night he leave the draw-bars down, another night he fling off the top rails, and next night he tear down a whole panel of fence, and he keep on this a-way till apparently Brer Rabbit don't know what to do.

They set out, they did, and after while, sure enough, they come to the peach-orchard, and Brer Rabbit, what do he do but pick out a good tree, and up he climb. Brer Fox, he sat hisself at the root of the tree, 'cause he allow that when Brer Rabbit come down he had to come down backwards, and then that'd be the time for to nab him. But, bless your soul, Brer Rabbit done see what Brer Fox after before he climb up. When he pull the peaches, Brer Fox say, says he, "Fling 'em down here, Brer Rabbit—fling 'em right down here so I can catch 'em," says he.

Brer Rabbit, he sort of wunk the furthest eye from Brer Fox, and he holler back, he did, "If I fling 'em down there where you is, Brer Fox, and you misses 'em, they'll get squshed," says he, "so I'll just sort of pitch 'em out yonder in the grass where they won't get bust," says he.

Then he took and flung the peaches out in the grass, and whiles Brer Fox went after 'em, Brer Rabbit, he skinned down out of the tree, and hustle hisself till he get elbow-room. When he get off little ways, he up and holler back to Brer Fox that he got a riddle he want him to read. Brer Fox, he ask what is it. With that, Brer Rabbit, he give it out to Brer Fox like a man saying a speech:
Big bird rob and little bird sing,
The big bee zoom and little bee sting,
The little man lead and big horse follow—
Can you tell what's good for a head in a hollow?

Old Brer Fox scratch he head and study, and study and scratch he head, but the more he study the worse he get mix up with the riddle, and after while he took and tell Brer Rabbit that he don't know how in the name of goodness to unriddle that riddle.

"Come and go along with me," says old Brer Rabbit, says he, "an' I bound you I show you how to read that same riddle. It's one of them there kind of riddle," says old man Rabbit, says he, "which before you read her you got to eat a bite of honey, and I done got my eye set on the place where we can get the honey at," says he.

Brer Fox, he ask whereabouts is it, and Brer Rabbit, he say up there in old Brer Bear cotton-patch, where he got a whole passel of bee-gums. Brer Fox, he allow, he did, that he ain't got no sweet-tooth much, yet he want to get at the innards of that there riddle, and he don't care if he do go along.

They put out, there did, and it weren't long before there come to old Brer Bear bee-gums, and old Brer Rabbit, he up and give 'em a rap with he walking-cane, just like folks thumps water-melons for to see if they are ripe. He tap and he rap, and by and by he come to one of 'em which she sound like she plumb full, and then he go 'round behind it, old Brer Rabbit did, and he up and say, says he, "I'll just sort of tilt her up, Brer Fox," says he, "an' you can put yo' head under there and get some of the drippin's," says he. 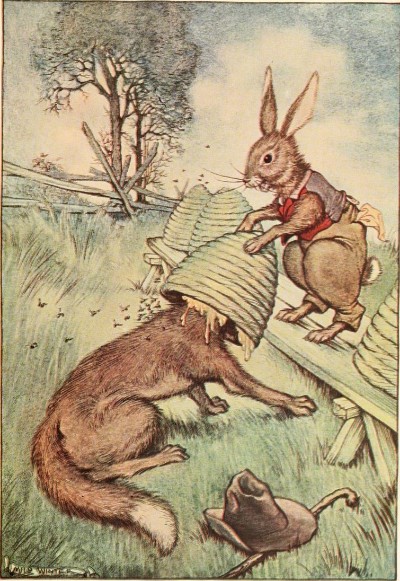 Brer Fox, he kick; he squeal; he jump; he squall; he dance; he prance; he beg; he pray; yet there he was, and when Brer Rabbit get way off, and turn 'round for to look back, he see Brer Fox just a-wiggling and a-squ'ming, and right then and there Brer Rabbit give one old-time whoop, and just put out for home.

"I still keeps poorly, I'm obliged to you, Brer Rabbit," says Gran'sire Gray Fox, says he. "Is you seed any sign of my grandson this mornin'?" says he.

With that Brer Rabbit laugh and say which him and Brer Fox been a-rambling 'round with one another having more fun than what a man can shake a stick at.

Then old Gran'sire Gray Fox, he up and ask what is it, and Brer Rabbit, he sing out, he did,
Big bird rob and little bird sing,
The big bee zoom and little bee sting,
The little man lead and big horse follow—
Can you tell what's good for a head in a hollow?

Gran'sire Gray Fox, he took a pinch of snuff and cough easy to hisself, and study and study, but he ain't make it out, and Brer Rabbit, he laugh and sing,
Bee-gum mighty big for to make Fox collar,
Can you tell what's good for a head in a hollow?'

After so long a time, Gran'sire Gray Fox sort of catch a glimpse of what Brer Rabbit trying to give him, and he tip Brer Rabbit good-day, and shuffle on for to hunt up he grandson. 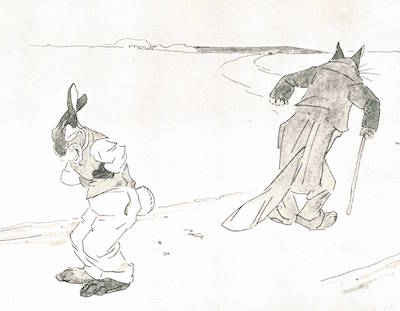