42. The Fire-Test. Text Source: Nights with Uncle Remus by Joel Chandler Harris. Online at Project Gutenberg. I have removed the frame material and standardized the spelling; click here for the original spelling plus all notes to the story.


WHO ATE THE LITTLE RABBITS? 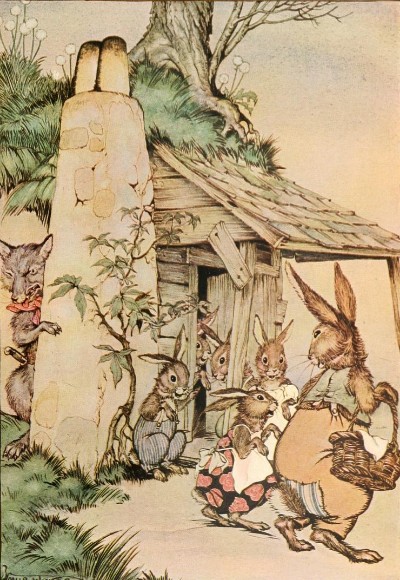 There was a time when Brer Rabbit was going off from home for to get a mess of green truck. When Brer Rabbit get ready for to go, he call all he chilluns up, and he tell 'em that when he go out they must fasten the door on the inside, and they mustn't turn nobody in, nohow, 'cause Brer Fox and Brer Wolf been laying 'round waiting chance for to nab 'em. And he took and told 'em that when he come back, he'd rap at the door and sing,
I'll stay
when you away,
'cause no gold
will pay toll!

The little Rabs, they held up their hands and promise that they won't open the door for nobody excepting they daddy, and with that, Brer Rabbit he took and put out, he did, at a hand-gallop, hunting something or other to eat. But all  this time, Brer Wolf been hiding out behind the house, and he hear every word that pass, and old Brer Rabbit weren't more than out of sight 'fore Brer Wolf went to the door, and he knock, he did,— blip, blip, blip!

Little Rab holler out, "Who that?"

Brer Wolf he sing,
I'll stay
when you away,
'cause no gold
will pay toll!


The little Rabs they laugh fit to kill theyself, and they up and allow, "Go 'way, Mr. Wolf, go 'way! You ain't none of we-all daddy!"

Old Brer Wolf he slunk off, he did, but every time he thunk of them plump little Rabs, he just get more hongry than before, and it weren't long before he was back at the door —blap, blap, blap!

Little Rab holler, "Who that?"

Brer Wolf, he up and sing,
I'll stay
when you away,
'cause no gold
will pay toll!

The little Rabs they laugh and roll on the floor, and they up and allow, "Go 'way, Mr. Wolf! We-all daddy ain't got no bad cold like that."

Brer Wolf slunk off, but by and by he come back, and this time he try mighty hard for to talk fine. He knock at the door—blam, blam, blam!

Little Rab holler, "Who that?"

Brer Wolf turn loose and sing,
I'll stay
when you away,
'cause no gold
will pay toll!

Brer Wolf he slunk off, he did, and he go 'way out in the woods, and he sing, and sing, till he can sing fine as the next man. Then he go back and knock at the door, and when the little Rabs ask who that, he sing them the song; and he sing so nice, and he sing so fine, that they undo the door, and old Brer Wolf walk in and gobble 'em all up, from the first to the last.

When old Brer Rabbit get back home, he find the door standing wide open and all the chilluns gone. There weren't no sign of no tussle; the hearth was all swept clean, and everything was all to rights, but right over in the corner he see a pile of bones, and then he know in reason that some of the other critters done been there and make hash out of he chilluns.

Then Brer Rabbit took and lay the case 'fore Brer Terrapin. Old Brer Terrapin was a mighty man in them days, a mighty man, and no sooner is he hear the state of the condition than he up and call all the critters together. He call 'em together, he did, and then he up and tell 'em 'bout how somebody done took and destroy all of Brer Rabbit chillun, and he allow that the man what do that pleased to be caught, 'cause if he ain't, there ain't no telling how long it'll be 'fore the same somebody'll come along and destroy all the chillun in the settlement.

Brer Bear, he up and ask how they going find 'im, and Brer Terrapin say there are always a way. Then he allow, "Let's dig a deep pit."

After the pit done fill up, Brer Terrapin say, "Now, then, let's set it a-fire."

When the fire begun to blaze up, Brer Terrapin allow that the critters must jump across that, and the man what destroy Brer Rabbit chilluns will drop in and get burnt up. Brer Wolf been so uppity about digging, and filling, and kindling, that they all expected 'im for to make the first trial; but, bless your soul and body! Brer Wolf look like he got some other business for to attend to.

The pit look so deep, and the fire burn so high, that they most all afeared for to make the trial, but after while, Brer Mink allow that he ain't hunted none of Brer Rabbit chilluns, and with that, he took running start, and leaped across. Then Brer Coon say he ain't hunted 'em, and over he sailed. Brer Bear say he feel more heavy than he ever is before in all he born days, but he ain't hurted none of Brer Rabbit poor little chilluns, and with that, away he went across the fire. 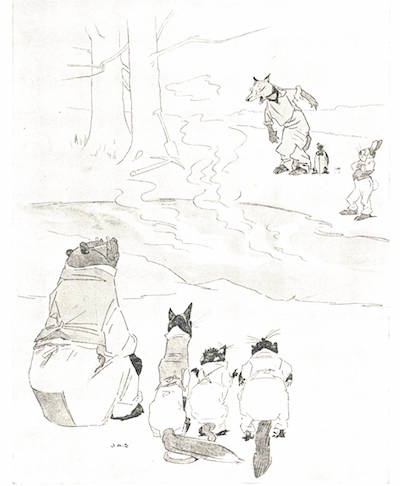 They all jump, till by and by it come Brer Wolf time. Then he begun to get scared, and he mighty sorry 'cause he dig that pit so deep and wide, and kindle that fire so high. He took such a long running start, that time he get to the jumping place, he was done wore teetotally out, and he leaped up, he did, and fetched a squall and dropped right spang in the middle of the fire.