10. Mr. Terrapin Appears Upon the Scene. Text Source: Uncle Remus, His Songs and His Sayings by Joel Chandler Harris. Online at Project Gutenberg. I have removed the frame material and standardized the spelling; click here for the original spelling plus all notes to the story.

One day, after Sis Cow done run past her own shadow trying for to catch him, Brer Rabbit took and allow that he was going to drop in and see Miss Meadows and the gals, and he got out his piece of looking-glass and primp up, he did, and set out. Going cantering long the road, who should Brer Rabbit run up with but old Brer Terrapin—the same old one-and-sixpence. Brer Rabbit stop, he did, and rap on the roof of Brer Terrapin house. 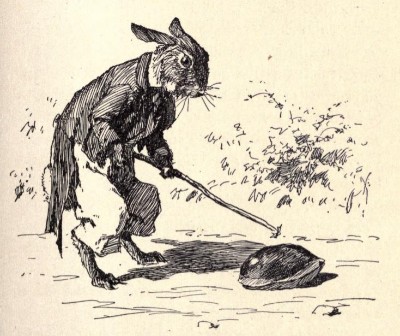 Brer Terrapin carry his house with him. Rain or shine, hot or cold, strike up with old Brer Terrapin when you will and whilst you may, and where you find him, there you'll find his shanty.

Then Brer Rabbit allow he was on his way for to see Miss Meadows and the gals, and he ask Brer Terrapin if he won't join in and go long, and Brer Terrapin respond he don't care if he do, and then they set out. They had plenty of time for confabbing long the way, but by and by they got there, and Miss Meadows and the gals they come to the door, they did, and ask 'em in, and in they went.

When they got in, Brer Terrapin was so flat-footed that he was too low on the floor, and he weren't high enough in a chair, but while they was all scrambling round trying for to get Brer Terrapin a chair, Brer Rabbit, he pick him up and put him on the shelf where the water-bucket sat, and old Brer Terrapin, he lay back up there, he did, just as proud as a black man with a cook possum. 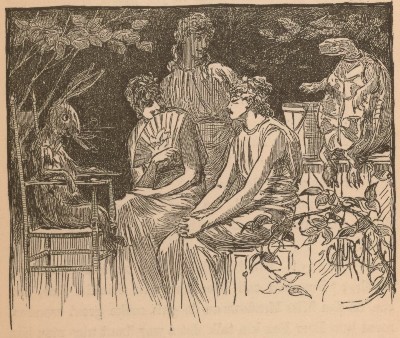 Course the talk fell on Brer Fox, and Miss Meadows and the gals make a great admiration about what a gaily riding-hoss Brer Fox was, and they make lots of fun, and laugh and giggle same like gals does these days.

Brer Rabbit, he sat there in the chair smoking his cigar, and he sort of clear up his throat, and say, says he, "I'd've rid him over this mornin', ladies," says he, "but I rid him so hard yesterday that he went lame in the off fore leg, and I 'spect I'll have to swop him off yet," says he.

Then Brer Terrapin, he up and say, says he, "Well, if you goin' to sell him, Brer Rabbit," says he, "sell him somewhere out of this neighborhood, 'cause he done been here too long now," says he. "No longer'n day 'fore yesterday," says he, "Brer Fox pass me on the road, and what do you reckon he say?" says he.

"Lawd, Brer Terrapin," says Miss Meadows, says she, "you don't mean to say he cussed?" says she, and then the gals held their fans up before their faces.

"Oh, my! You hear that, gals?" says Miss Meadows, says she; "Brer Fox call Brer Terrapin Stinkin' Jim," says she, and then Miss Meadows and the gals make great wonderment how Brer Fox can talk that a way about nice man like Brer Terrapin.

But bless gracious, whilst all this going on, Brer Fox was standing at the back door with one ear at the cat-hole listening. Eaves-droppers don't hear no good of theyself, and the way Brer Fox was abused that day was a caution.

By and by Brer Fox stick his head in the door, and holler out, "Good evenin', folks, I wish you mighty well," says he, and with that he make a dash for Brer Rabbit, but Miss Meadows and the gals they holler and squall, they did, and Brer Terrapin he got to scrambling round up there on the shelf, and off he come, and blip he took Brer Fox on the back of the head. 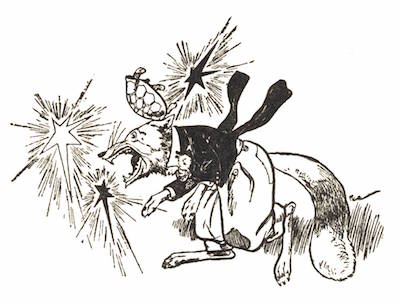 This sort of stunned Brer Fox, and when he gather his remembrance the most he seed was a pot of greens turned over in the fireplace, and a broke chair. 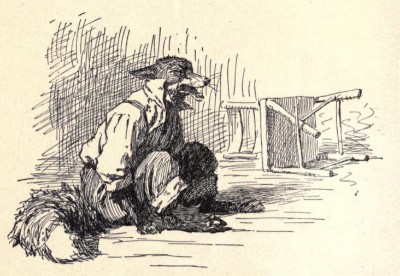 Brer Fox, he sort of look round and feel for the back of his head, where Brer Terrapin lit, but he don't see no sign of Brer Rabbit. But the smoke and the ashes going up the chimney got the best of Brer Rabbit, and by and by he sneeze—huckychow!

Then Brer Fox, he went out after some wood, he did, and when he come back he hear Brer Rabbit laughing.

"What you laughin' at, Brer Rabbit?" says Brer Fox, says he.

"Tain't nothin' but a box of money somebody done gone and left up here in the chink of the chimney," says Brer Rabbit, says he. 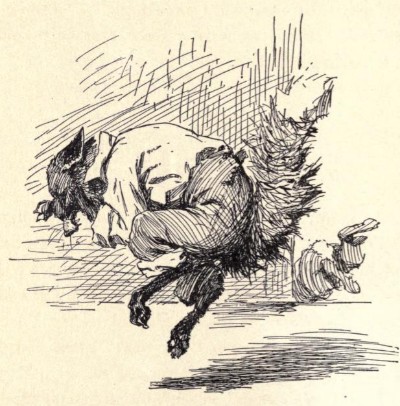 "Look up an' see," says Brer Rabbit, says he, and when Brer Fox look up, Brer Rabbit spit his eyes full of tobacco juice, he did, and Brer Fox, he make a break for the branch, and Brer Rabbit he come down and told the ladies good-by. 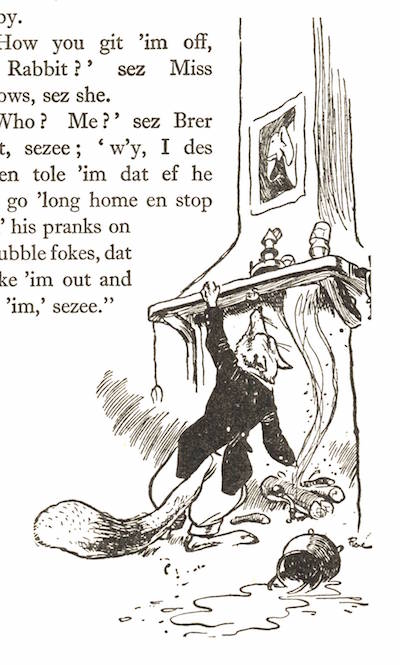 "How you get him off, Brer Rabbit?" says Miss Meadows, says she.

"Who? Me?" says Brer Rabbit, says he; "why I just took and told him that if he didn't go 'long home and stop playin' his pranks on 'spectable folks, that I'd take him out and thrash him," says he. 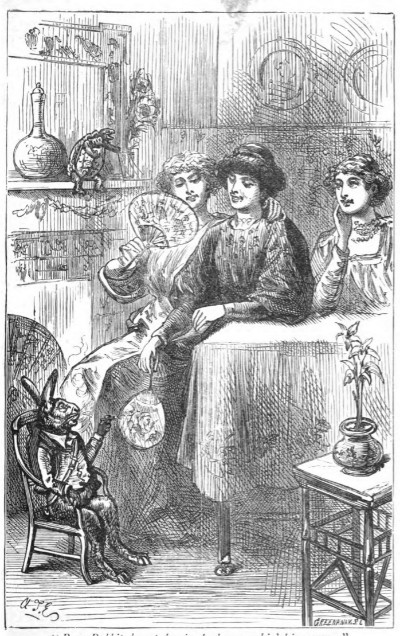