C122. Brother Rabbit Has Fun at the Ferry

3: Brother Rabbit Has Fun at the Ferry. Text Source: Uncle Remus and His Friends by Joel Chandler Harris. Online at Hathi Trust. I have removed the frame material and standardized the spelling; click here for notes to the story.

Brer Bear was a mighty fine ferryman, there ain't no two ways about that. But there was one time when he got outdone. I don't know what time of the day, nor what day of the month, but it was somewheres 'twixt two sun-ups. Brer Bear was sitting in the shade, wishing that someone'd come long and drop a sevenpence in his pocket. He was just about to doze off when he hear somebody holler. Man across the river say, "Hello!"

Brer Bear raise up and allow, "How you like for somebody to call you Hello?"

The flat she swung 'round, and Brer Bear he sung out, "Ride in, mister, and make yo'self at home."

Right then and there, right then and there the trouble begun. Nobody weren't to blame; nobody weren't the occasion of it. It just broke out by it's own 'lone self. The man, he cluck to the mare, and try for to ride her in the flat, but the mare she held her head down and sort of snort, and refuse to budge. The man try to coax her, but she won't be coaxed. Then he give her the whip and spur, but she whirl 'round and refuse to go in the flat. She'd go up, she'd go down, she'd go anywhere and everywhere excepting in the flat. Then the man lit and tried to lead her, but the mare drug him about over the sand like he ain't weigh more than two pound and a half.

By and by Brer Bear look 'round, and who should he see sitting cross-legged on a stump a-watching on him, but old Brer Rabbit? 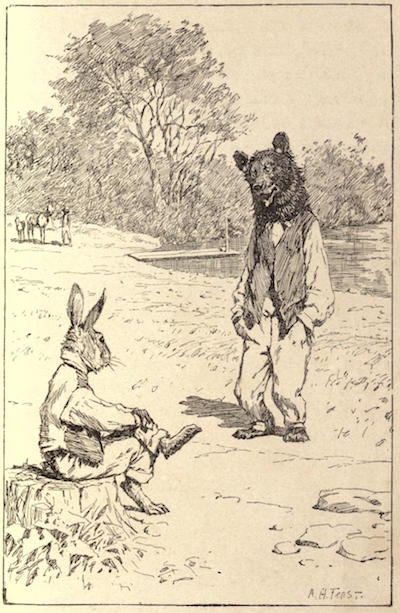 There he was, just as natural as one of these here daguerreotypes. From where he stood Brer Bear couldn't tell whether Brer Babbit was laughing or whether  he was crying, but his face was mighty wrinkled up.

Brer Bear call him, but Brer Rabbit shook his head. Brer Bear ask him to come help him get the mare on the flat, but Brer Rabbit shook his head. Brer Bear was about to abuse Brer Rabbit before company, but another notion struck him, and he took and wobbled off to where Brer Rabbit was sitting. Time he got where they could hold a confab, Brer Rabbit allow, "What the name of goodness is you all tryin' to do down there? What kind of capers is you cuttin' up? I been sitting here watching you, and just dyin' of laughin' at the way you an' the man an' them critters been goin' on."

Brer Bear try to explain, but Brer Rabbit keep a-talking. "Go on back down there, Brer Bear, and fool 'round with 'em some more. For gracious sake lemme have my fun out! Go on, Brer Bear — go on! Whiles I'm a-sittin' here chewin' my tobacco, lemme enjoy myself, an' get the worth of my holiday. Go june-bug 'round some more!"

Then Brer Bear up and tell Brer Rabbit what the matter is, and Brer Rabbit laugh and holler fit to kill hisself. He allow, "My goodness, Brer Bear, I had the idea that you all been cuttin' up them capers a-purpose."

Brer Rabbit say, says he, "Well, Brer Bear, if you let that bother you more than a minute, you'll make me believe that you got dropsy of the head. I hear tell that lots of folks is gettin' down with that kind of sickness."

Then Brer Bear say he expect he got it, 'cause he can't make no arrangement for to get that old mare on the flat. Brer Rabbit look at him right hard, and sort of wrinkle up his face. He allow, says he, "Brer Bear, it just as easy as going to sleep in a swing."

Brer Rabbit allow, says he, "Well then, Brer Bear, all you got to do is to shove the colt on the flat, and the mammy'll follow right after."

Old Brer Bear went a-wobbling back to the river, and when he got there he drove the colt on the flat, and the mare followed after, same as if she'd been born and raise on a flat. When Brer Bear see that, he allow, "Well!"

The man ask him who told him how to do that. Brer Bear make answer that it was Brer Rabbit, and then he went on to tell the man about what a soon critter Brer Rabbit is, that nobody can't fool him, and nobody can't outdo him. The man listen, and then he allow that he coming back that a-way in a day or two, and he bet a pot of honey against a dish of cream that he can outdo Brer Babbit. Brer Bear took the bet, and then they shook hands to make it more binding.

Well, it weren't long after that before here come the man back, and this time he had two mares. He was riding one, and leading the other, and they was both just as much alike as two peas. They was the same color, the same size, and the same gait. Brer Bear took the man 'cross on the other side, and then he say that now is the time for to settle the bet. He allow, says he, "One of these mares is the mammy, and the other one is the colt. Now call up Brer Rabbit, and ask him to tell me which is which, and which is the other. Ask him to tell me which is the mammy, and which is the colt. And he ain't got to look in their mouth neither."

Brer Bear feel mighty bad, 'cause he smell the pot of honey in the man's saddle-bags, and it make his mouth water. Man keep on saying, "Go fetch my dish of cream." But Brer Bear ain't going to give up that away. He done made thear'rangement for to call Brer Rabbit when the man come back, and he went up on top of the hill and holler for him. I tell you now, it weren't long before Brer Rabbit hove in sight. He come a-hopping and a-jumping, he come a-ripping and a-rearing.

The man he give up. He say that beat his chime, and then he ask Brer Rabbit how can he tell. Brer Rabbit allow, says he, "The colt, being as she is the youngest, is got the best toothies. The best toothies eat the grass first. Then when the mammy see the colt ain't got none, she willing to divide with her. If the mammy had made at the colt's bundle, the colt'd surely have bit at her."

The man look astonish, but he ain't satisfied. He give Brer Bear the pot of honey, but he say he got an nother pot, and he willing to bet that he can fool Brer Rabbit next time. Brer Bear took the bet. Then the man left his horses there, and took a little basket and went off in the woods. He was gone a right smart little while, but by and by, here he come back. He held the basket high, so Brer Rabbit can't see the inside, and then he hung it on a tree limb. Then he ask Brer Rabbit what the basket got in it.

Brer Rabbit study, and then he allow, says he, "The sparrow can tell you."

The man look at him hard, and then he say, says he, "What kind of critter is you, nohow?" He took the basket down, he did, and sure enough, there was a sparrow in it. He give Brer Bear the other pot, and as he was going, he holler back at Brer Rabbit, says he, "You of one of these here graveyard rabbits, that what you is." Brer Rabbit laugh, but he ain't say nothing. He just dip his paw in the pot of honey and lick it off, and he work his mouth like it taste mighty good.

When the man ask Brer Rabbit, "What in dar?" he make answer that a sparrow can tell him, 'cause a sparrow flying 'round can see what in the basket. Luck told him; Brer Rabbit was a mighty man for luck.