2: How a Witch Was Caught. Text Source: Daddy Jake, The Runaway by Joel Chandler Harris. Online at Hathi Trust. I have removed the frame material and standardized the spelling; click here for notes to the story.

HOW A WITCH WAS CAUGHT

One time there was a miller man what live by a river and had a mill. He was a mighty smart man. He took so much toll that he took and buyed him a house, and he want to rent that there house out to folks, but the folks they allowed that the house was haunted. They'd come and rent the house, they would, and move in there, and then go upstairs and go to bed. They'd go to bed, they would, but they couldn't sleep, and time it got day they'd get out of that house.

The miller man, he asked 'em what the matter was, but they just shook their head and allow the house was haunted. Then he took and try to find out what kind of haunt she was that scare folks. He sleep in the house, but he ain't see nothing, and the most what he hear was a big old gray cat a-promenading round and hollering.

By and by it got so that they want no fun in having the haunted house, and when folks'd come along the miller man, he'd just up and tell 'em that the house was haunted. Some'd go up and some wouldn't, but them what went up didn't stay, 'cause just about bedtime they'd fetch a yell and just come a-rushing down, and all the money in the United States of Georgia wouldn't get 'em for to go back up there.

It went on this away till one time a preacher man come along there and say he wanted somewheres to stay. He was a great big man, and he look like he was good according. The miller man say he hate mighty bad for to disaccommodate him, but he disappointedly ain't got no place where he can put him except that there haunted house. The preacher man say he just soon stay there as anywheres, 'cause he been living in these low-grounds of sorrow too long for to be set back by any one-horse haunts. The miller man allowed that he was a-feared the haunts'd worry him mightily, but the preacher man allow, he did, that he used to being worried, and he up and tell the miller man that he'd a heap rather stay in the house with the haunt, no matter how big she is, than to stay out doors in the rain.

So the miller man, he allow he ain't got no more apology for to make, 'cause if the preacher man was ready for to face the haunts and set up there and out blink 'em, they wouldn't be nobody in the round world no gladder than him. Then the miller man showed the preacher man how to get in the house and had him a great big fire built. And after the miller man was done gone, the preacher man drawed a chair up to the fire and waited for the haunts, but they ain't no haunts come. Then when they ain't no haunts come, the preacher man took and open up he satchel and got him out some spare ribs and sat 'em by the fire for to cook, and then he got down and said he prayers, and then he got up and read he Bible. He was a mighty good man, man, and he prayed and read a long time. By and by, when his spare ribs get done, he got some bread out of he satchel, and fixed for to eat his supper.

By the time he got all the meat off of one of the ribs, the preacher man listened, and he heared a monstrous scrambling and scratching on the wall. He look 'round, he did, and there was a great big black cat a-sharpening her claws on the door facing. Folks, don't talk! That there cat was of sight! Great long white tooths and great big yellow eye-balls a-shining like they was lit up way back in her head. She stood there a minute, that old black cat did, and then she begun to sidle up like she was going to mount that preacher man right there and then. But the preacher man, he just shooed at her, and it seem like this sort of scared her, 'cause she went off. 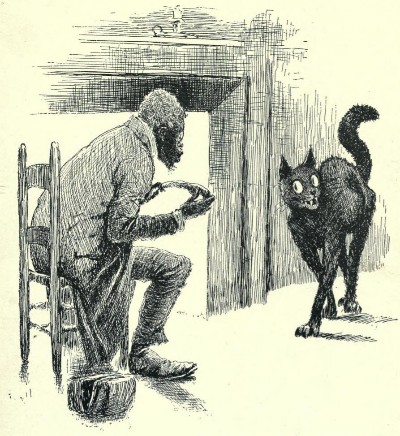 But the preacher man, he kept his eye open, and held on to his spare rib. Presently he hear the old black cat coming back, and this time she fetch with her a great big gang of cats. They was all black just like she was, and their eye-balls shineded and their lashes was long and white. it look like the preacher man was a-going to get surroundered.

They come a-sidling up, they did, and the old black cat made a pass at the preacher man like she was a-going to tear he eyes out. The preacher man dodged, but the next pass she made, the preacher man fetch her wipe with his spare rib and cut off one of her toes. With that the old black cat fetch a yell that you might a-heard a mile, and then she give herself a sort of a twist and made her disappearance up the chimney, and when she do that all the other cats made their disappearance up the chimney. The preacher man he got up, he did, and looked under the bed for to see if he can find any more cats, but they was all done gone.

Then he took and pick up the cat toe what he done knock off with the spare rib, and wrap it up in a piece of paper and put it in he pocket. Then he say his prayers some more, and went to bed and slept right straight along till broad daylight, and nothing ain't darest to bother him.

Next morning the preacher man got up, he did, and say his prayers and eat his breakfast, and then he allow to hisself that he'll go by and tell the miller man that he mighty much obliged. Before he start, it come across he mind about the cats what pester him the night before, and he took and feel in he pockets for the big black cat toe what he done cut off with the spare rib. But it seems like the toe done grow in the night, and bless goodness! When he unwrap it it weren't nothing less than a great big finger with a ring on it.

So the preacher man took and fix up all his contrapments, and then call on the miller man and told him he was mighty much obliged 'cause he let him stay in the house. The miller man was astonished for to see the preacher man, 'cause he knew that when folks stay all night in that house they ain't come down no more. He was astonished, but he didn't say much. He just stand still and wonder.

They talk and talk, they did, and after while the preacher man hold out his hand for to tell the woman good-bye; but the woman, she held out her left hand, she did, like she want that for to get shooken. But the preacher man wouldn't shake that one. He say that ain't nigh going to do, 'cause when folks got any politeness left they don't never hold out the left hand. The woman she say her right was cripple, but her old man allow he ain't never hear about that before, and then he took and make her pull it out from under the cover, and then they seed that one of her fingers was done clean gone.

The miller man he up and allow,"How come this?"

The miller man he allow, "How you cut it off?"

The woman she allow, "I knock it off?"

The miller man he allow, "Whereabouts you knock it off?"

The woman she allow, "I broke it off."

The miller man he allow, "When you break it off?"

Then the woman she ain't say nothing. She just lay there, she did, and pant and look scared.

The preacher man he study a little and then he say he expect he can cure that hand, and he took the finger out and he pocket and tried it on the woman's hand, and it fit! Yes sir! It fit in the place right smick smack smooth.

Then the preacher man he up and tell the miller man that the woman was a witch, and with that the woman fetched a yell and covered her head with the counterpane.

Yet this ain't do her no good, 'cause the preacher man say he done look in the books and the onliest way for to cure a witch is to burn her; and it ain't look so bad, neither, 'cause when they tied her she took and turn to be a great big black cat, and that's the way she was when she was burnt.