C016. Brer Rabbit Down in the Well

16. Old Mr. Rabbit, He's a Good Fisherman. Text Source: Uncle Remus, His Songs and His Sayings by Joel Chandler Harris. Online at Project Gutenberg. I have removed the frame material and standardized the spelling; click here for the original spelling plus all notes to the story.

Brer Rabbit and Brer Fox, both of 'em was always after one another, a pranking and a pestering 'round, but Brer Rabbit did had some peace, 'cause Brer Fox done got skittish about putting the clamps on Brer Rabbit.

One day, when Brer Rabbit, and Brer Fox, and Brer Coon, and Brer Bear, and a whole lot of 'em was clearing up a new ground for to plant a roasting-ear patch, the sun begun to  get sort of hot, and Brer Rabbit he got tired; but he didn't let on, 'cause he feared the balance of 'em'd call him lazy, and he keep on toting off trash and piling up brush, till by and by he holler out that he got a brier in his hand, and then he take and slip off, and hunt for cool place for to rest. 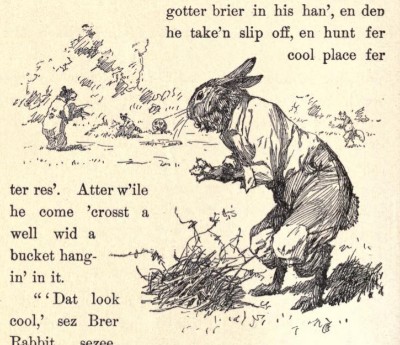 After while he come across a well with a bucket hanging in it. 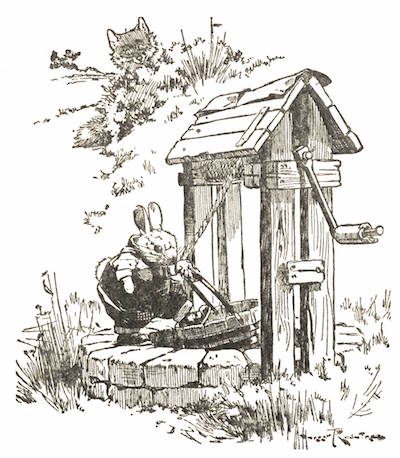 "That look cool," says Brer Rabbit, says he, "and cool I 'spect she is. I'll just 'bout get in there an' take a nap," and with that in he jump, he did, and he ain't no sooner fix hisself than the bucket begun to go down. 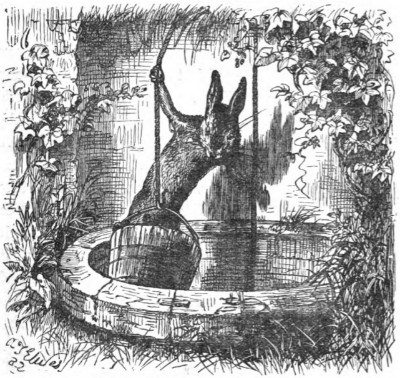 They ain't been no worser scared beast since the world begin than this here same Brer Rabbit. He fairly had a ague. He know where he come from, but he don't know where he going. Directly he feel the bucket hit the water, and there she sat, but Brer Rabbit he keep mighty still, 'cause he don't know what minute going to be the next. He just lay there and shook and shiver.

Brer Fox always got one eye on Brer Rabbit, and when he slip off from the new ground, Brer Fox he sneak after him. He know Brer Rabbit was after some project or another, and he took and crept off, he did, and watch him. Brer Fox see Brer Rabbit come to the well and stop, and then he see him jump in the bucket, and then, lo and beholds, he see him go down out of sight. Brer Fox was the most astonished Fox that you ever laid eyes on. He sat off there in the bushes and study and study, but he don't make no head nor tails to this kind of business.

Then he say to hisself, says he, "Well, if this don't bang my chimes," says he, "then Joe's dead an' Sal's a widow. Right down there in that well Brer Rabbit keep his money hid, an' if 'tain't that then he done gone an' discovered a gold-mine, an' if 'tain't that, then I'm a-goin' to see what's in there," says he. 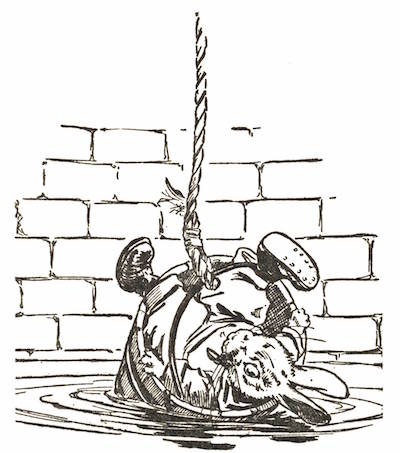 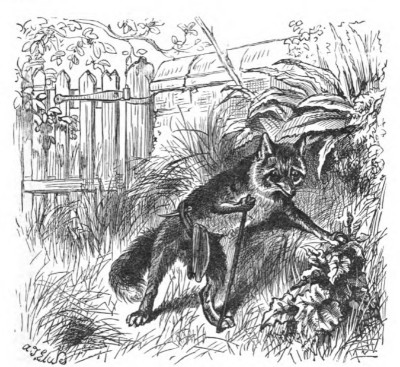 All this time Brer Rabbit mighty nigh scared out of his skin, and he feared for to move 'cause the bucket might keel over and spill him out in the water. While he saying his prayers over like a train of cars running, old Brer Fox holler out, "Heyo, Brer Rabbit! Who you visitin' down there?" says he.

"Is there many of 'em down there, Brer Rabbit?" says Brer Fox, says he.

"Lots of 'em, Brer Fox; scores and scores of 'em. The water is naturally 'live with 'em. Come down an' help me haul 'em in, Brer Fox," says Brer Rabbit, says he.

"Jump into the bucket, Brer Fox. It'll fetch you down all safe an' sound."

Brer Rabbit talk so happy and talk so sweet that Brer Fox he jump in the bucket, he did, en, as he went down, course his weight pull Brer Rabbit up. 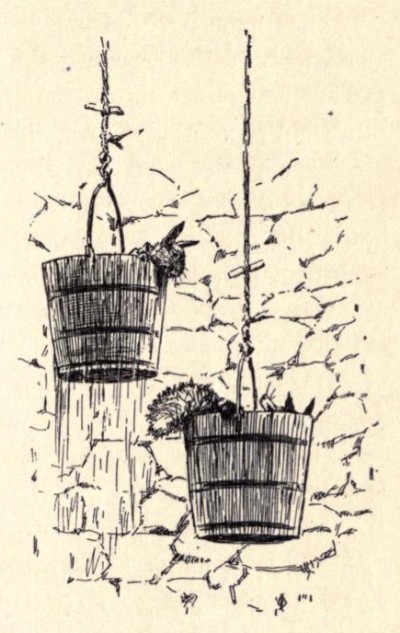 When they pass one another on the half-way ground, Brer Rabbit he sing out, "Good-by, Brer Fox, take care your clothes,
For this is the way the world goes;
Some goes up an' some goes down,
You'll get to the bottom all safe an' sound."

When Brer Rabbit got out, he gallop off and told the folks what the well belong to that Brer Fox was down in there muddying up the drinking water, and then he gallop back to the well, and holler down to Brer Fox,
"Here come a man with a great big gun—
When he haul you up, you jump and run."

In just about half an hour, both of 'em was back in the new ground working just like they never heared of no well, excepting that every now and then Brer Rabbit'd bust out in a laugh, and old Brer Fox, he'd get a spell of the dry grins.