18: Brother Rabbit Conquers Brother Lion. Text Source: Uncle Remus and His Friends by Joel Chandler Harris. Online at Hathi Trust. I have removed the frame material and standardized the spelling; click here for notes to the story.

There was one time when Brer Lion was sort of playing overseer with the other critters. It seem like he got the idea that all of 'em got to pay 'im toll, 'cause he the strongest and the most servigorous. He claim one out of every family: one sheep from the sheeps, one goat from the goats, and one from all the kinds.

By and by, after so long a time, he sent word to Brer Rabbit that his turn done come, and Brer Rabbit he sent back word, "All a-setting." Course this make old Miss Rabbit and all the chilluns feel mighty bad. The chilluns, they sat 'round a-whimpering and a-snuffling, and old Miss Rabbit, she went about crying and wiping her eyes on her apron. But Brer Rabbit, he sat up and smoke his cigar, and tell 'em for to quit their behavishness and learn how to don't.

He allow, "Old woman, if I ain't back by supper-time, just set my vittles down there on the hearth, so it'll keep sort of warm."


OlD Miss Rabbit say, that instead of wanting vittles, he'll be vittles hisself, and then she snuffle worse and worse. But Brer Rabbit he just hoot at her, and then he took down his walking cane and put out for to see Brer Lion. The little Rabs, they holler out, "Good-by, daddy!" and Brer Rabbit, he holler back, "So long!" Old Miss Rabbit, she look after 'im, she did, and then she flung her apron over her head, and just boo-hoo.

But Brer Rabbit, he march down the road as gay as if he going to a frolic. He march on, he did, and just 'fore he get to the place where old Brer Lion stay at, he hid his walking cane in the fence corner, and rumpled up his hair and drawed hisself up till he look like he ain't bigger than a pound ofd soap after a hard day's washing. Then he went where there was a big, deep spring, a little piece off from the road, and look at hisself in the water. He sort of roach back his yars, and make hisself look humble-come-tumble, and then he drawed his mouth 'round and wunk one eye, and shook his fist at his shadow there in the water.

He got back in the big road, he did, and crept along like he ailing, limpingfirst on one foot and then on the other, and by and by he come to the place where old Brer Lion stay at.

Brer Rabbit sort of drag hisself along, and make a bow. Brer Lion look at 'im sideways, and ask 'im where he going. Brer Rabbit say he come the more willing 'cause it's his turn to come, and he been feeling mighty poorly this long time. He talk mighty weak and trembly.

Brer Lion look at 'im right close, and allow, "You won't make a mouthful. Time I eat you, I'll just be getting hungry good."

Brer Rabbit say, "Yes sir, I know I ain't fat, and I expect I got lots of fleas on me, but I'm mighty willing. I got a bad cough, and I'm tired of falling off. I'm just about as fat as the mule the man had, which he had to tie a knot in his tail for to keep 'im from slipping through the collar."

Brer Lion look at 'im, and study. Brer Rabbit was so scared he talk weaker and weaker.

He say, "Whiles I coming 'long just now, I seed a critter that was most big and fat as what you is, and I allow to myself that I wish to goodness I was fat as he is; so Brer Lion can make out his dinner."

Brer Rabbit say, "I ain't ask him his name. He refuse to respond to my howdy, and he look so servigorous that I put out from there."

Brer Rabbit say, "I'd do it in a minute, Brer Lion, but I scared he'll hurt you."

Brer Lion sort of bristle up at this. He allow, "Hurt who? Come on, and go with me where he is, and I'll show you who'll get hurted, and that in short order!"

Brer Rabbit shook his head. He say, "You better take me, Brer Lion. I ain't much, but I'm something, and that there critter what I seed will surely hurt you. He got claws and he got tooths, 'cause I done seed 'em. Don't go where he is, Brer Lion, if you got any friendly feeling for your family. That critter will surely cripple you!"

This make Brer Lion mighty mad. He allow, "Get right in the road there and show me where he is!"

They went on, they did, and Brer Rabbit took Brer Lion to the spring. When they got there, Brer Rabbit look 'round and say, "He was right 'round here somewheres, and he ain't so mighty far off now, 'cause I feel it in my bones."

Then he crept up, Brer Rabbit did, and look in the spring. Time he do this, he fetched a squall and jump back. "Ouch, Brer Lion! He in there! Let's run! He'll get us, sure!" 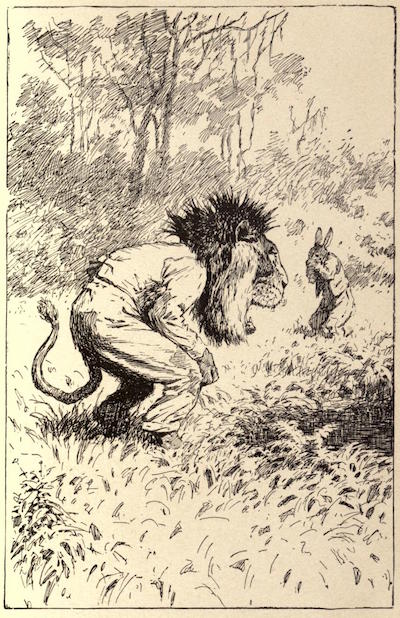 They kept on this a-way, till by and by Brer Lion get so mad that he jump in the spring head foremost. When he in there he can't get out no more, and so there he is, strangled with the water and drownded for the want of both sense and breath.

Brer Rabbit, he caper 'round there some little time, and then he put out for home, and when he get there, he took his chilluns on his knee and told 'em a mighty tale about how he make way with old Brer Lion.