9. Miss Cow Falls a Victim to Mr. Rabbit. Text Source: Uncle Remus, His Songs and His Sayings by Joel Chandler Harris. Online at Project Gutenberg. I have removed the frame material.

Brer Rabbit went skipping along home, he did, just as sassy as a jay-bird at a sparrow's nest. He went galloping along, he did, but he feel mighty tired out, and stiff in his joints, and he was mighty nigh dead for something for to drink, and by and by, when he got almost home, he spied ole Miss Cow feeding round in a field, he did, and he determined for to try his hand with her.

Brer Rabbit know mighty well that Miss Cow won't give him no milk, 'cause she done refuse him more than once, and when his old woman was sick, at that. 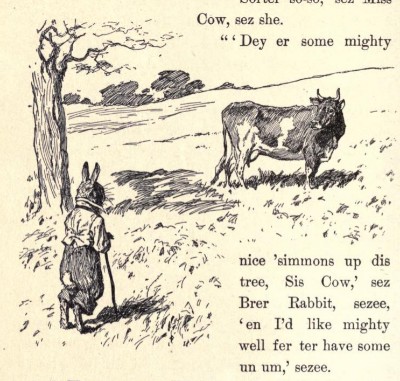 But never mind that. Brer Rabbit sort of dance up along side of the fence, he did, and holler out, "Howdy, Sis Cow," say Brer Rabbit, says he. 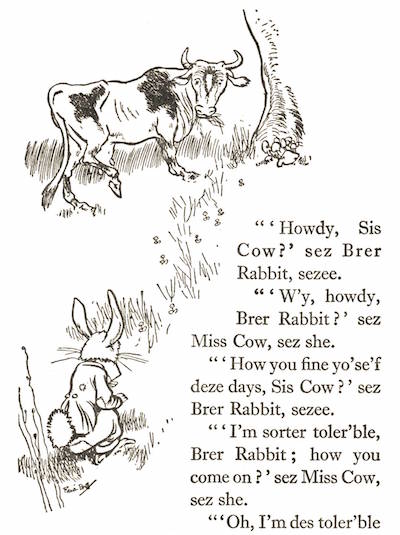 "How you fine yo'self these days, Sis Cow?" say Brer Rabbit, says he.

"I'm sort of tolerable, Brer Rabbit; how you come on?" say Miss Cow, say she.

"They are just middlin', Sis Cow; how Brer Bull getting on?" say Brer Rabbit, says he.

"There are some mighty nice 'simmons up this tree, Sis Cow," say Brer Rabbit, says he, "an' I'd like mighty well for to have some of 'em," says he.

"I allowed maybe that I might ask you for to butt 'gainst the tree, an' shake some down, Sis Cow," say Brer Rabbit, says he. 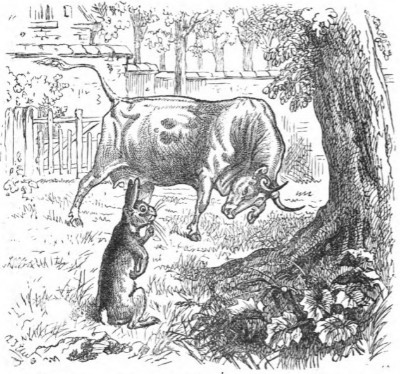 This exactly what Brer Rabbit waiting for, and he no sooner seed ole Miss Cow all fastened up than he jump up, he did, and cut the pigeon-wing.

"I can't climb, Sis Cow," say Brer Rabbit, says he, "but I'll run an' tell Brer Bull," says he; and with that Brer Rabbit put out for home, and it weren't long 'fore here he come with his ole woman and all his chilluns, and every last one of the family was toting a pail. The big ones had big pails, and the little ones had little pails. 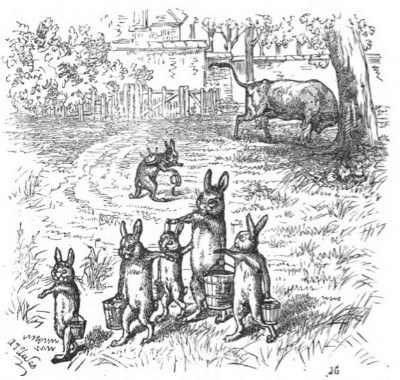 And they all surrounded ole Miss Cow, they did, and they milked her dry. 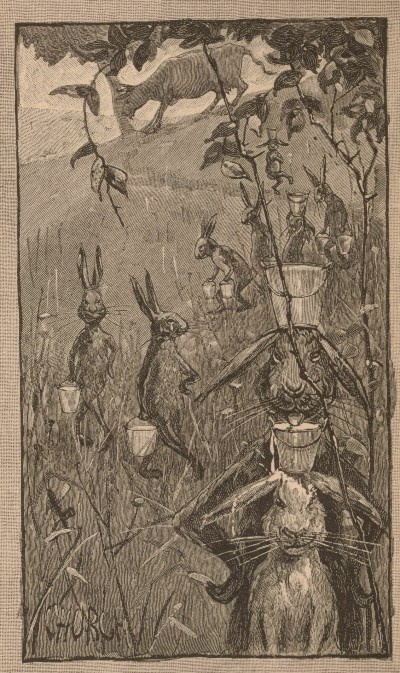 The ole ones milked and the young ones milked, and then when they done got enough, Brer Rabbit, he up and say, says he, "I wish you mighty well, Sis Cow. I 'lowed, bein's how that you'd had to sort of camp out all night that I'd better come and suage yo' bag," says he. 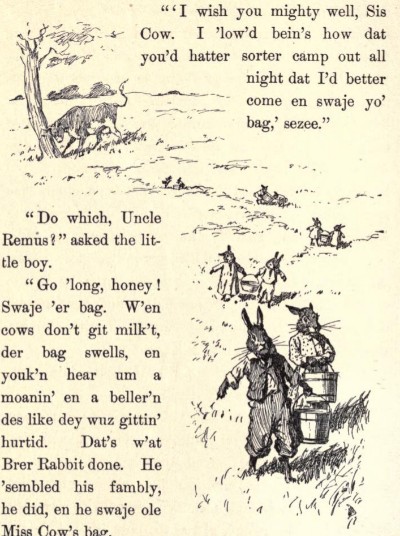 When cows don't get milked, their bag swells, and you can hear 'em a-moaning and a-bellering just like they was getting hurted. That's what Brer Rabbit done. He assembled his family, he did, and he suage ole Miss Cow's bag. 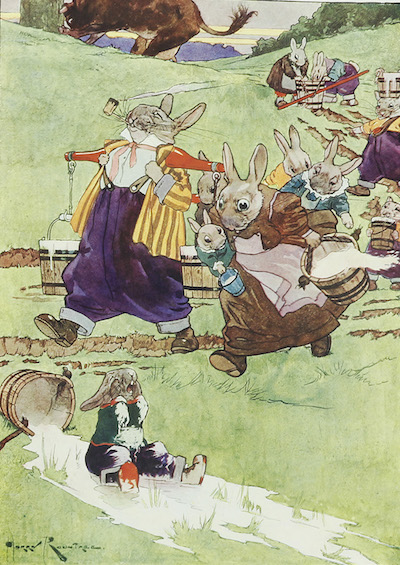 Miss Cow, she stood there, she did, and she study and study, and strive for to break loose, but the horn done been jam in the tree so tight that it was way before day in the morning before she loose it. Anyhow it was enduring of the night, and after she get loose she sort of graze 'round, she did, for to justify her stomach she allowed, ole Miss Cow did, that Brer Rabbit be hopping along that way for to see how she getting on, and she took and lay a trap for him; and just about sunrise what'd ole Miss Cow do but march up to the persimmon tree and stick of horn back in the hole? But, bless your soul, while she was cropping the grass she took one mouthful too many, 'cause when she hitch on to the persimmon tree again, Brer Rabbit was setting in the fence corner a-watching un her.

Then Brer Rabbit he say to hisself, "Heyo," says he, "what this your going on now? Hold yo' horses, Sis Cow, till you hear me comin'," says he.

And then he crept off down the fence, Brer Rabbit did, and by and by here he come—lippity-clippity, clippity-lippity—just a-sailing down the big road. 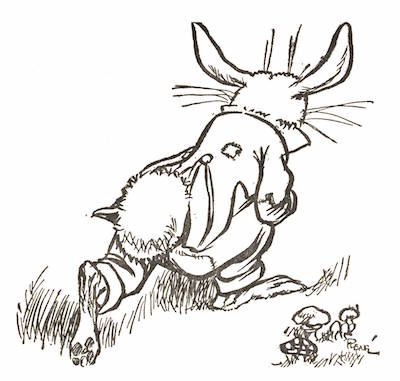 Then Brer Rabbit, he come up little closer, but he ain't getting too close. "I 'spect I'm nigh enough, Sis Cow," say Brer Rabbit, says he. "I'm a mighty puny man, and I might get trampled," says he. "You do the pullin', Sis Cow,' says he, and I'll do the gruntin," says he.

Then Miss Cow, she pull out her horn, she did, and took after Brer Rabbit, and down the big road they had it, Brer Rabbit with his ears laid back, and Miss Cow with her head down and her tail curl. Brer Rabbit kept on gaining, and by and by he dart in a brier-patch, and by the time Miss Cow come long he had his head sticking out, and his eyes look big as Miss Sally's china saucers.

"He just this minute pass," say Brer Rabbit, says he, "an' he look mighty sick," says he.

And with that, Miss Cow took down the road like the dogs was after her, and Brer Rabbit, he just lay down there in the brier-patch and roll and laugh till his sides hurted him. He pleased to laugh. Fox after him, Buzzard after him, and Cow after him, and they ain't catch him yet.