C150. When Brer Rabbit Was King

7. When Brother Rabbit Was King. Text Source: Told by Uncle Remus by Joel Chandler Harris. Online at Project Gutenberg. I have removed the frame material and standardized the spelling; click here for the original spelling plus all notes to the story.


WHEN BRER RABBIT WAS KING

Way back yonder, most 'fore the time when folks got in the habits of dreaming dreams, there was a King and this here King king'd it over all of 'em what was there, more specially the critters, 'cause what folks there was ain't know nothing at all about whether they need any kinging or not; look like they didn't count.

Well, this here King what I'm a-telling you about had pretty well growed up at the business, and the time come when he got mighty tired of sitting in one place and holding a crown on his head for to keep it from falling on the floor. He say to hisself that he want to get out and get the fresh air, and have some fun along with them what he been kinging over. He allow that he want to fix it so that he ain't a-caring whether school keep or no, and he ask 'em all what the best thing he can do.

Well, one say one thing and the other say another, but by and by some of 'em chipped in and say that the best way to have fun is to go fishing, and this kind of hit the King right in the middle of his notions.

He jump up and crack his heels together, he did, and he say that that's what he been thinking about all the time. A-fishing it was and a-fishing he'd go, if his life was spared till he can get to the creek. And, with that, there was a mighty stirring round amongst them what he was a-kinging over; some of 'em run off to get fishing-poles, and some run for to dig bait, and some run for to get the bottle, and there they had it—you'd've thunk that all creation was going fishing. 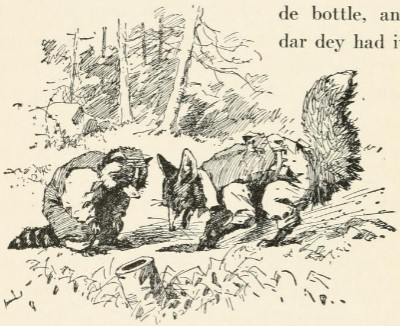 When everything got good and ready, and the King was about to start off, old Brer Rabbit kind of hung his head on one side and set up a snigger. The King, he look astonished and then he allow, "What's the joke, old friend?"

"Well," says old Brer Rabbit, says he, "it look like to me that you about to go off and forget something. It ain't none of my business, but I couldn't help from giggling."

The King, he say, "Up and out with it, old friend; let's hear the worst there is to hear."

Old Brer Rabbit, he say, says he, "I don't know if it makes any difference, but who going to do the kinging whiles you gone a-fishing?"

Well, the King look like he was mightily took back; he flung up both hands and sat right flat in a chair, and then he allow, "I done got so that I'm the forgettingest critter what live on top of the ground; you may hunt high and low and you won't never find them what can beat me a-forgetting. Here I was about for to go off and leave the whole business at sixes and sevens." 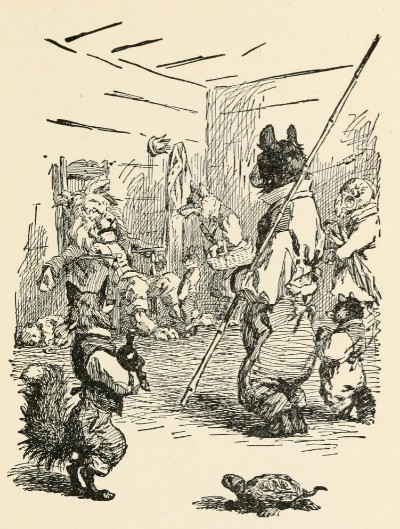 Old Brer Rabbit, he say, says he, "Oh, I expect that would've been all right; there ain't likely to be no hurricane, nor no freshet whiles you gone."

The King, he allow, "That ain't the thing; here I was about to go off on a frolic and leave everything for to look after itself. What you reckon folks would've said? I tell you now, there ain't no fun in being a King, 'cause your time ain't your own, and you can't turn round without skinning your shins on some by-law or another. 'Fore I go, if go I does, I got to appoint somebody for to take my place and be King whiles I'm gone; and if it weren't that, it'd be something else, and so there you go year in and year out."

He sat there, he did, and study and study, and by and by he say, says he, "Brer Rabbit, supposing you take my place whiles I'm gone? I'll pay you well; all you got to do is to sit right flat in a chair and make a dollar a day."

Old Brer Rabbit say that would suit him mighty well, 'cause he pleased for to have some money so he can buy his old woman a calico dress. 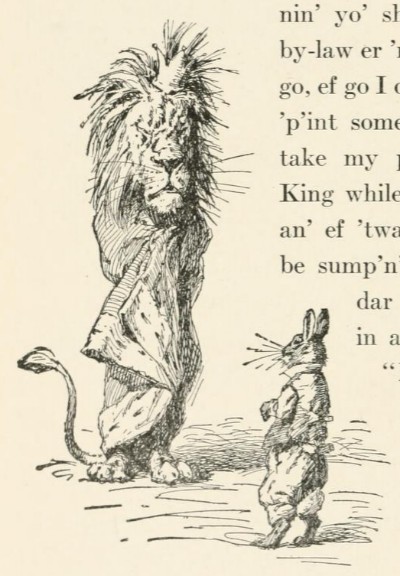 Well, it ain't take 'em long for to fix it all up, and so Brer Rabbit, he done the kinging whiles the King gone a-fishin'. He made the job a mighty easy one, 'cause instead of sitting up and holding the crown on his head, he tied some strings on it and fix it so it'd stay on his head without holding. 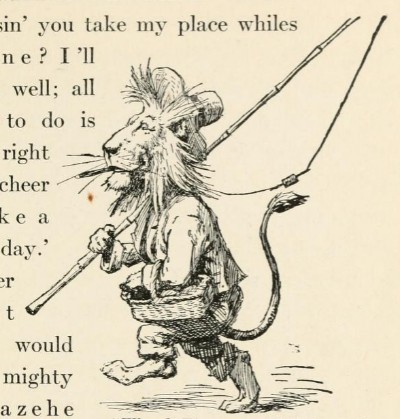 Well, when the King went a-fishing, he went the back way, and he ain't more than got out the gate till old Brer Rabbit hear a big rumpus in the front yard.

He hear something growling and howling and whining, and he ask what it was. Some of them what wait on the King shook their heads and say that if the King was there he wouldn't pay no attention to the racket for the longest; they say that the biggest kind of fuss ain't disturb the King, 'cause he'd just sit right flat and wait for someone to come tell somebody what the rumpus is about, and then that other somebody would tell someone else, and maybe about dinner-time the King would find out what going on, when all he had to do was to look out the window and see for hisself. 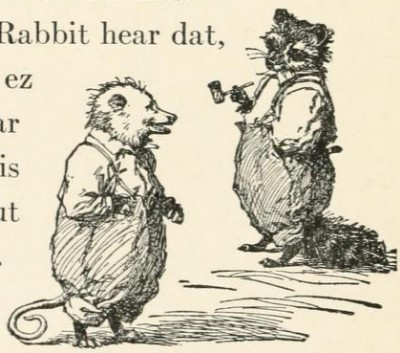 When old Brer Rabbit hear that, he lay back as well as he can with that there crown on top of his head, and make out he taking a nap. 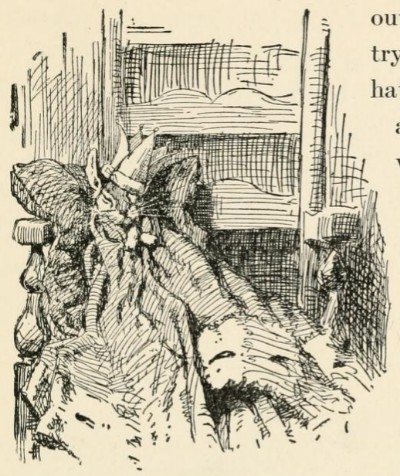 After so long a time, word come that Mr. Dog was out there in the entry where they all had to wait at, and he sent word that he pleased to see the King. Old Brer Rabbit, he sat there, he did, and do like he studying, and after so long a time, he tell 'em for to fetch Mr. Dog in and let him say what he got to say.

Well, Mr. Dog come creeping in, he did, and he look mighty humble-come-tumble. He was so poor that it look like you can see every bone in his body and he was mangy looking. His head hung down, and he was kind of shivering like he was cold.

Brer Rabbit make out he trying for to fix the crown on his head so it'll sit up straight, but all the time he was looking at Mr. Dog for to see if he knowed him—and sure enough, he did, 'cause it was the same Mr. Dog what done give him many a long chase.

Well, Mr. Dog, he stood there with his head hanging down and his tail between his legs. Everything was so still and solemn that he begun to get uneasy, and he look round for to see if there's any way for to get out without running over somebody. There ain't no way, and so Mr. Dog sort of wiggle the end of his tail for to show that he ain't mad, and he stood there expecting that every minute would be the next. 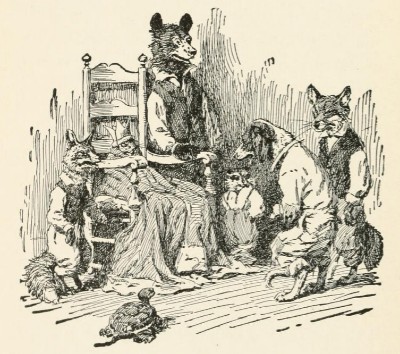 By and by, somebody say, "Who that want to see the King and what business is he got with him?"

When Mr. Dog hear that, the howl that he set up might've been heard a mile or more. He up and allow, he did, that him and all his tribe, and more specially his kinnery, is been having the worse times that anybody ever is hear tell of. He say that where they used to get meat, they now gets bones, and mighty few of them, and where they used to be fat, they now has to lean up again the fence, and lean mighty hard, if they want to make a shadow. Mr. Dog had lots more to say, but the long and the short of it was that him and his kinnery weren't treated right.

Old Brer Rabbit, which he playing King for the day, he kind of study, and then he clear up his throat and look solemn. He ask if there's any turpentine out there in the back yard or in the cellar where they keep the harness grease, and when they say they expect there's a drop or two left, old Brer Rabbit tell 'em for to fetch it in, and then he tell 'em to get a pound of red pepper and mix it with the turpentine. So said, so done. They grab Mr. Dog, and rub the turpentine and red pepper from head to heel, and when he holler they run him out of the place where the kinging was done at. 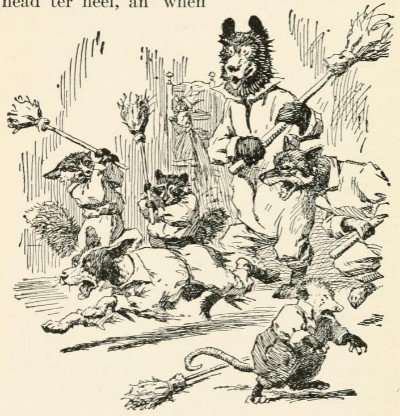 Well, time went on, and one day followed another just like they does now, and Mr. Dog ain't never gone back home, where his tribe and his kinnery was waiting for him. They wait, and they wait, and by and by they begun to get uneasy. Then they wait some more but it get so they can't stand it no longer, and then a whole passel of 'em went to the house where they do the kinging at, and make some inquirements about Mr. Dog. 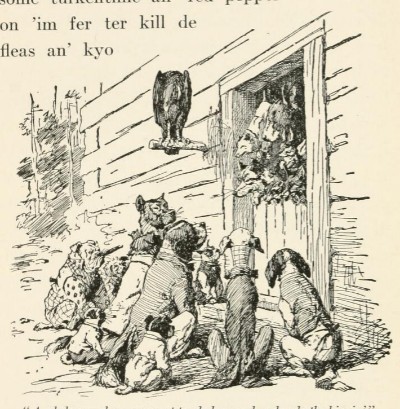 Them that live at the King's house up and tell 'em that Mr. Dog done come and gone. They say he got what he come after, and if he ain't gone back home they don't know where he is. They told about the poor mouth he put up, and they say that they give him pretty well all that a gentleman dog could ask for.

The other dogs say that Mr. Dog ain't never come back home, and them what live at the King's house say they mighty sorry for to hear such bad news, and they tell the dogs that they better hunt him up and find out what he done with that what the king give him. The dogs ask how they going to know him when they find him, and them at the King's house say they can tell him by the smell, 'cause they put some turpentine and red pepper on him for to kill the fleas and cure the bites.

Well, since that day the other dogs been hunting for the dog what went to the King's house; and how does they hunt? It ain't no needs for to tell you, 'cause you know point-blank as good as I can tell you. Since that day and hour they been smelling for him. They smells on the ground for to see if he been along there; they smells the trees, the stumps, and the bushes, and when they comes up with another dog that they ain't never seed before, they smells him good for to see if he got any red pepper and turpentine on him; and if you'll take notice they sometimes smells at a bush or a stump, and their bristles will rise, and they'll paw the ground with their fore feet, and likewise with their behind feet, and growl like they are mad. When they do that, they are telling you what they going to do when they get hold of that dog what went to the King's house and ain't never come back.