6. Mr. Rabbit Grossly Deceives Mr. Fox. Text Source: Uncle Remus, His Songs and His Sayings by Joel Chandler Harris. Online at Project Gutenberg. I have removed the frame material and standardized the spelling; click here for the original spelling plus all notes to the story.

Seem like that the tale about how he got mixed up with the Tar-Baby got 'round amongst the neighbors. Leastways, Miss Meadows and the gals got wind of it, and the next time Brer Rabbit paid 'em a visit Miss Meadows tackled him about it, and the gals set up a monstrous gigglement. Brer Rabbit, he sat up just as cool as a cucumber, he did, and let 'em run on.

Brer Rabbit, he sat there, he did, sort of lamb like, and then by and by he cross his legs, he did, and wink his eye slow, and up and say, says he, "Ladies, Brer Fox was my daddy's ridin'-horse for thirty year; maybe mo', but thirty year that I knows of," says he; and then he paid 'em his respects, and tip his beaver, and march off, he did, just as stiff and as stuck up as a fire-stick.

Next day, Brer Fox come a calling, and when he begun for to laugh about Brer Rabbit, Miss Meadows and the gals, they ups and tells him about what Brer Rabbit Say. 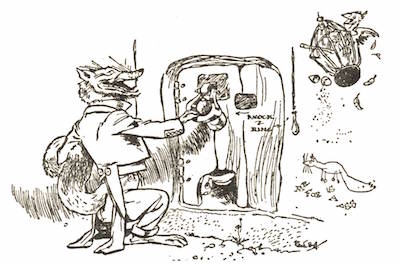 Then Brer Fox grit his tooths sure enough, he did, and he look mighty dumpy, but when he riz for to go he up and say, says he, "Ladies, I ain't 'sputin' what you say, but I'll make Brer Rabbit chew up his words an' spit 'em out right here where you can see 'em," says he, and with that off Brer Fox put. 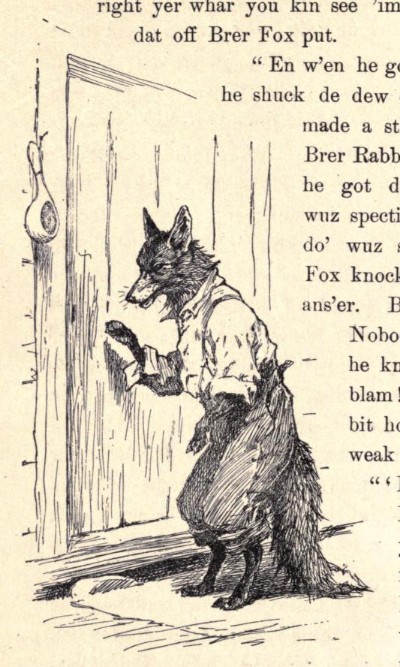 Then Brer Rabbit holler out mighty weak, "Is that you, Brer Fox? I want you to run an' fetch the doctor. That bite of parsley what I et this mornin' is gettin' 'way with me. Do, please, Brer Fox, run quick," says Brer Rabbit, says he.

Then Brer Rabbit say he was too sick, and Brer Fox say he wasn't, and there they had it up and down, disputing and contending.

Brer Rabbit say how? Brer Fox say in his arms.

By and by Brer Rabbit say he go if Brer Fox tote him on his back. Brer Fox say he would.

Brer Rabbit say he can't ride without a saddle. Brer Fox say he get the saddle.

Brer Rabbit say he can't sit in saddle unless he have bridle for to hold by. Brer Fox say he get the bridle.

Brer Rabbit say he can't ride without blind bridle, 'cause Brer Fox be shying at stumps along the road, and fling him off. Brer Fox say he get blind bridle.

Then Brer Rabbit say he go. Then Brer Fox say he ride Brer Rabbit almost up to Miss Meadows's, and then he could get down and walk the balance of the way.

Brer Rabbit agreed, and then Brer Fox leapt out after the saddle and the bridle.

Course Brer Rabbit know the game that Brer Fox was fixing for to play, and he determined for to outdo him, and by the time he comb his hair and twist his mustache, and sort of rig up, here come Brer Fox, saddle and bridle on, and looking as pretty as a circus pony. 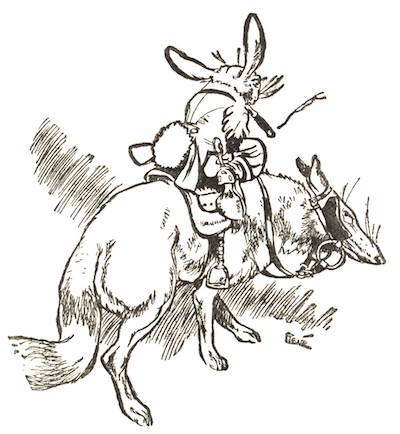 He trot up to the door and stand there pawing the ground and chomping the bit same like sure enough horse, and Brer Rabbit he mount, he did, and they amble off. 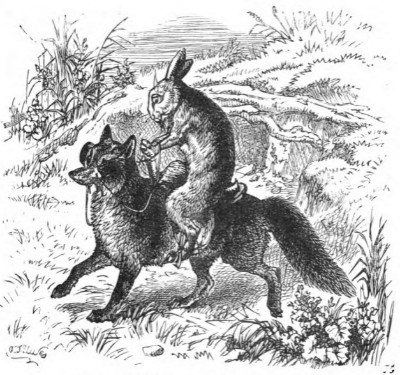 Brer Fox can't see behind with the blind bridle on, but by and by he feel Brer Rabbit raise one of his foots.

By and by Brer Rabbit raise up the other foot. 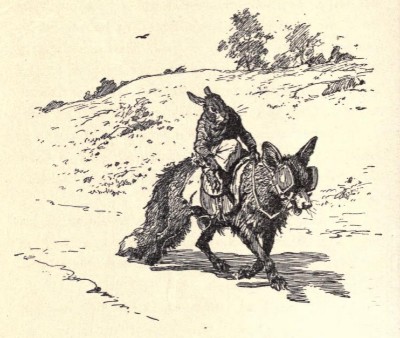 All the time, bless gracious, Brer Rabbit were putting on his spurrers, and when they got close to Miss Meadows's, where Brer Rabbit was to get off, and Brer Fox made a motion for to stand still, Brer Rabbit slap the spurrers into Brer Fox flanks, and you better believe he got over ground.

When they got to the house, Miss Meadows and all the gals was setting on the piazza, and instead of stopping at the gate, Brer Rabbit rid on by, he did, and then come galloping down the road and up to the horse-rack, which he hitch Brer Fox at, and then he saunter into the house, he did, and shake hands with the gals, and sat there, smoking his cigar same as a town man.

By and by he draw in a long puff, and then let it out in a cloud, and square hisself back and holler out, he did, "Ladies, ain't I done tell you Brer Fox was the ridin'-horse for our family? He sort of losin' his gait now, but I 'spect I can fetch him all right in a month or so," says he.

And then Brer Rabbit sort of grin, he did, and the gals giggle, and Miss Meadows, she praise up the pony, and there was Brer Fox hitch fast to the rack, and couldn't help hisself.