C167. The Story of the Doodang

1: The Story of the Doodang. Text Source: Uncle Remus and the Little Boy by Joel Chandler Harris. Online at Hathi Trust. I have removed the frame material and standardized the spelling; click here for notes to the story.


I'll tell you this much: if everybody was to get all their wishes, the wide world'd be turned upside down, and be rolling over the wrong way. It sure would! Like theold Doodang that used to live in the mud-flats down on the river. I ain't never see him myself, but I done seed them what say they hear tell of them what is see him.

None of them can't tell what kind of critter the Doodang was. He had a long tail, like a yellow gator, a great big body, four short legs, two short ears, and a head more funny looking than the rhinossy-hoss. His mouth reached from the end of his nose to his shoulder-blades, and his tooths was big enough, long enough, and sharp enough for to bite off the behind leg of a elephant. He could live in the water, or he could live on dry land, but he mostly wallowed in the mud-flats,  where he could reach down in the water and catch a fish, of reach up in the bushes and catch a bird. 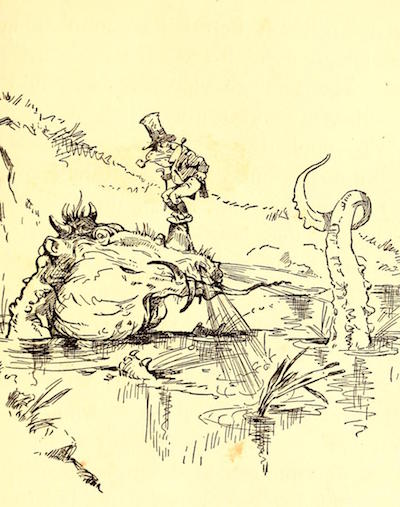 But all this ain't suit him at all; he got restless; he took to wanting things he ain't got; and he worried and worried, and groaned and growled. He kept all the critters, fur and feather, wide awake for miles 'round.

By and by, one day, Brer Rabbit come a-sauntering by, and he ask the Doodang what the name of goodness is the matter, and the Doodang respond and say that he want to swim as good as the fishes does.

Brer Rabbit say, "Ouch! You make the cold chills run up an' down my back when you talk about swimmin' in the water. Swim on dry land, old friend — swim on dry land!" But some of the fishes done hear what the Doodang say, and they held a big assembly. They vow they can't stand the racket that he been making both day and night. The upshot of the assembly was that all the fishes agree for to loan the Doodang one fin apiece. So said, so done, and when they told the Doodang about it, he fetched one loud howl and rolled into shallow water.

Once there, the fishes loaned him every one a fin, some big and some little, and after they done that, the Doodang discover that he can swim just as nimble as the rest. He skeeted about in the water, waving his tail from side to side, and swimming far and wide.

Brer Rabbit was sitting off in the bushes watching.

After while the Doodang get tired, and start to go on dry land, but the fishes kick up such a big fuss, and make such a cry, that he say he better give them back their fins, and then he crawled out on the mud-flats for to take his nap.

He ain't been dozing so mighty long, before he hear a mighty big fuss, and he look up and see that the blue sky was fairly black with birds, big and little. The trees on the island was their roosting place, but they was coming home soon so they can get some sleep before the Doodang set up his howling and growling, and moaning and groaning.

After so long a time, the Doodang say that the trouble with him was that he wanted to fly. He say all he want was some feathers, and then he can fly as good as anybody.

Then the birds hold a assembly, and they all agree for to loan the Doodang a feather apiece. So said, so done, and in a minute or more he had the feathers a-plenty. He shook his wings, and ask whereabouts he must fly for the first try.

Brer Buzzard say the best place was to the island what ain't got nothing but dead trees on it, and with dat, the Doodang took a running start, and headed for the place. He was kind of clumsy, but he got there all right. The birds went along for to see how the Doodang'd come out. He landed with a tumble splash and splutter, and he ain't hardly hit the ground before Brer Buzzard say he don't want his feather for to get wet, and he grabbed it. Then all the birds grabbed theirs, and there he was.

Days and days come and went, and by and by Brer Rabbit want to know what done gone with the Doodang. 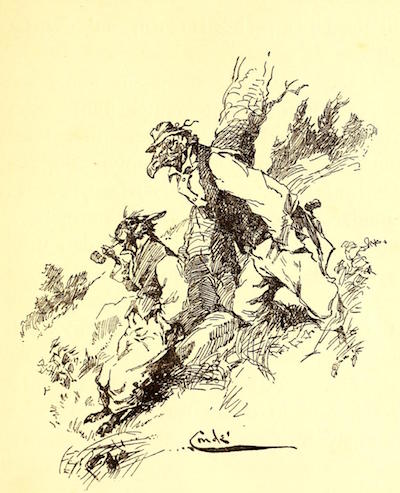 
Brer Buzzard say, "You see my family sitting in the dead trees? Well, there's where the Doodang is, and if you'll get me a bag, I'll fetch you his bones!"

And then Brer Rabbit sat back and laugh till his sides ache!