16: Brother Rabbit's Money Mint. Text Source: Uncle Remus and His Friends by Joel Chandler Harris. Online at Hathi Trust. I have removed the frame material and standardized the spelling; click here for notes to the story.

There was a time when Brer Fox went hunting the place where they make money. Brer Fox meet up with Brer Rabbit in the big road, and they pass the time of day, and ask one another how their family connection is. Brer Fox say he sort of middling pert, and Brer Rabbit say he sort of betwixt "My gracious!" and "Thank gracious!"

Whiles they are running on and confabbing, Brer Fox hear something rattling in Brer Rabbit's pocket. He allow, "If I ain't mighty much mistaken, Brer Rabbit, I hear money rattling."

Brer Rabbit sort of grin slow and hold his head careless. He say, "It ain't nothing much — just some small change what I pleased to take with me in the case of neccessity."

With dat he drawed out a big handful of specie-dollars, and quarters, and sevenpences, and thrips, and all right spang-bang new. It shined in the sun till it fair blind your eyes.

Brer Fox allow, "Lords-a-mercy, Brer Rabbit! I ain't seed so much money since I sold my watermelons last year. Ain't you scared someone'll fling you down and take it away from you?"

Brer Rabbit say, "Them what man 'nough to take it can have it;'"and he just strut along the road there more samer than one of these here military mens what got yellow stripes on their britches.

Brer Fox allow, "Where the name of goodness you get so much new specie, Brer Rabbit?"

Brer Rabbit say, "I get it where they make it at; that where I get it."

Brer Fox stop by the side of the road, and look astonish. He allow, "Whereabouts does they make this here specie at?"

Brer Rabbit say, "First in one place and then in another. You got to do like me, Brer Fox; you got to keep your eye wide open."

Brer Fox allow, "For mercy sake, Brer Rabbit, tell me how I going to find the place."

He beg and he beg, Brer Fox did, and Brer Rabbit look at 'im hard, like he got some doubts on his mind. Then Brer Rabbit sat down by the side of the road and mark in the sand with his walking cane.

By and by he say, "Well, supposing I tell you, you'll go blabbing it 'round the whole neighborhoods, and then they'll get it all, and we won't get none at all."

But Brer Fox just vow and declare to gracious that he won't tell a living soul, and then old Brer Rabbit sort of bent hisself back and clear up his throat. He say, "It ain't much after you find it out, Brer Fox; all you got to do is to watch the road till you see a wagon come along. If you'll look right close, you'll see that the wagon, if it's the right kind of wagon, is got two front wheels and two behind wheels; and you'll see furthermore that the front wheels is lots littler than the behind wheels. Now, when you see that, what is you pleased to believe?" 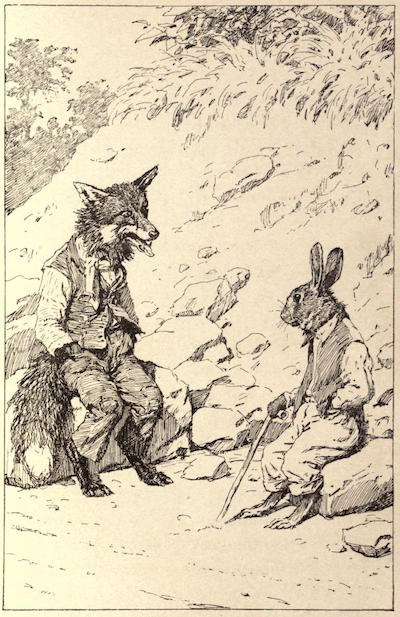 Brer Fox study little while, and then shook his head. He allow, "You too much for me, Brer Rabbit."

Brer Rabbit look like he feel sorry 'cause Brer Fox such a numskull. He say, "When you see that, you pleased to believe that after so long a time the big wheel going to catch the little one. Your common sense ought to tell you that."

Brer Rabbit say, "If you know that the big wheel going to catch the little wheel, and that brand new money going to drop from 'twixt 'em when they grind up against one another, what you going do then?"

Still Brer Fox study, and shake his head. Brer Rabbit look like he getting sick. He say, "You can sit down and let the wagon go on by, if you don't want no brand new money. Then again, if you want the money, you can follow along and keep watch, and see when the behind wheels overtake the front ones and be on hand when the money starts to dropping."

Brer Fox look like he got the idea. He sort of laugh.

Brer Rabbit say, "Next time you see a wagon going by, Brer Fox, just holler for me if you don't want to take no chances. just bawl out! I ain't got 'nough specie, and I ain't going to have 'nough."

Brer Fox, he broke off a broom straw and begun to chew on it, and just about that time, they hear a wagon coming 'cross the hill.

Brer Rabbit allow, "Just say the word, Brer Fox, and if you ain't going along after the wagon, I'll go myself!"

Brer Fox say, "Maybe the wheels done grinded together back yonder a piece."

Brer Rabbit allow, "I ain't got time to dispute, Brer Fox. If you ain't going, just say the word!"

Brer Fox sort of laugh like he shamed. He say, "I believe I'll go a little piece of the way and see how the wheels run."

With that, Brer Rabbit wish Brer Fox good luck, and went on about his business. Yet he ain't go so far that he can't watch Brer Fox's motions. At the rise of the next hill he look back, and there he see Brer Fox trotting along after the wagon. When he see that, Brer Rabbit just lay down in the grass and kick up his heels and holler.

Brer Fox he just follow along, trotting and galloping, waiting for the wheels to catch up with one another. If he ain't in Mississippi by this time, I'm mighty much mistaken.