13: Brother Rabbit Frightens Brother Tiger. Text Source: Uncle Remus and His Friends by Joel Chandler Harris. Online at Hathi Trust. I have removed the frame material and standardized the spelling; click here for notes to the story.

It ain't the biggest and the strongest that does the mostest in this world. Don't let nobody fool you about that. The cockle-burr got neither life nor limb, yet when it get in the sheep wool it can travel fast as the sheep. The elephant may be strong; I expect he is; and the tiger maybe servigorous as they say he is; but Brer Rabbit done outdone both of 'em.

By and by they come to where there was a creek, and there weren't no foot-log in sight. Brer Tiger ain't want to wet his feet no more than a cat do, and neither do Brer Rabbit, and so they went up the creek hunting for a foot-log. They go, and go, but they ain't find none.

By and by Brer Rabbit allow he know how to cross. Brer Tiger ask 'im how. Then Brer Rabbit grab a grape-vine hanging from the tree limb, and took a running start and swung hisself on the other side. When he turn the vine loose, it flew back to where Brer Tiger was, and Brer Tiger he caught hold and made for to swing hisself across. Time he done left the ground good, the vine broke, and he come down on his back in the creek, kersplash!

Course this make 'im feel bad, and when he crawled out and shook hisself, and see Brer Rabbit sitting up there, dry and clean, a-laughing fit to kill, it make 'im feel worse. He fetched a growl or two, and popped his mouth together, but Brer Rabbit kept one eye on 'im.

Brer Tiger allow, 'How come you ain't scared of me, Brer Rabbit? All the other critters run when they hear me coming."

Brer Rabbit say, "How come the fleas on you ain't scared of you? They of lots littler than what I is."

Brer Tiger allow, "It's mighty good for you that I done had my dinner, 'cause if I'd a-been hungry I'd a-snapped you up back there at the creek."

Brer Rabbit say, "If you'd done dat, you'd've had more sense in yo' hide than what you got now."

Brer Tiger allow, "I going to let you off this time, but next time I see you, watch out!"

Brer Rabbit say, "Being's you so monstrous polite, I'll let you off too, but keep yo' eye open next time you see me, 'cause I'll get you sure." 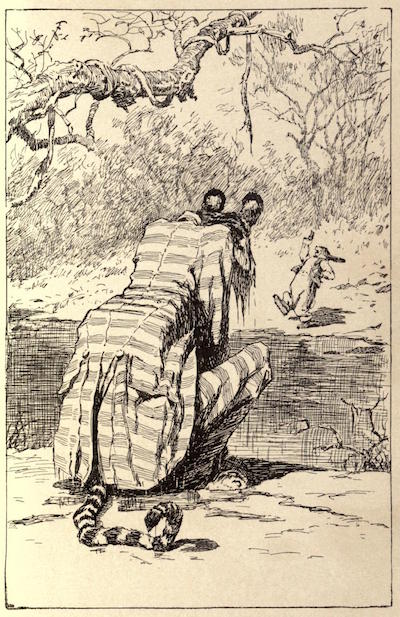 Brer Rabbit talk so biggity that Brer Tiger put on his studying cap, and he make up his mind that there ain't room 'nough in that county for both him and Brer Rabbit. Brer Tiger turn 'round, he did, and watch Brer Rabbit go tipping off, and he look so little and so sassy that it make Brer Tiger mad. It make 'im so mad that he caught hold of a tree and clawed most all the bark off of it. Bless gracious! The further he get from Brer Rabbit, the more madder he got. He just declare that the next time he strike up with Brer Rabbit he going to gobble 'im up without saying grace.

So, then, there it was, Brer Tiger against Brer Rabbit, and Brer Rabbit against Brer Tiger: one big, and the other one little; one servigorous from the word go, and the other one got neither tooth nor claw. It look mighty bad for Brer Rabbit! Well, I wish to goodness you could've seed 'im about that time. He went along through the woods as gay as a colt in a barley-patch. He wunk at the trees, he shook his fisties at the stumps, he make like he was quarreling with his shadow 'cause it follow along after 'im so close; and he went on scandalous, man!

Brer Rabbit ain't gone so mighty fare 'fore he hear a big noise in the bushes, and lo and beholds, there was old Brer Elephant tramping 'round and thrashing out the tops of the saplings. He look big as a young house, but, bless your soul! That ain't set Brer Rabbit back none. He just march up and ask old Brer Elephant how he come on, and one word led to another, till Brer Rabbit up and tell old Brer Elephant all about the confab what he been had with Brer Tiger. Then he allow that if old Brer Elephant will loan 'im a helping hand they can drive Brer Tiger bodaciously out of the county.

Old Brer Elephant flop his ears and shake his snout like he sort of dubious. He allow, "I ain't going to get hurted, is I, Brer Rabbit?"

This make Brer Rabbit roll his eyes and study. He ask, "Who the name of goodness gonna hurt you, Brer Elephant?"

Brer Elephant allow, "Brer Tiger got sharp claws and long tooths. I scared he bite me and scratch me."

Brer Rabbit say, "According to that I ought to be scared of a flea, 'cause just as I can squish a flea, just that away you can squish Brer Tiger. Yet they ain't going be no squishing done. If you'll do what I tell you, we'll just take and run Brer Tiger out of the county. Goodness knows, if my upper lip was long and limber like your own, I bound I'd've done got rid of Brer Tiger long 'fore now!"

Brer Elephant, he agree to do what Brer Rabbit say, but he flop his ears and work his snout like he mighty restless in the mind, and Brer Rabbit help 'im up the best way he can with biggity talk.

Soon next morning Brer Rabbit was up and a-moving. He done had everything fix, and he sat 'round in the bushes where he can see Brer Tiger long ways off. By and by he see Brer Tiger come sidling down the path, and no sooner is Brer Rabbit seed 'im than he make a break and run to where Brer Elephant standing. Then Brer Rabbit took and wrap a long vine 'round one of old Brer Elephant's behind legs, and then 'round a tree. He fix it so that anybody passing along would make sure the leg tied hard and fast. Then old Brer Elephant kneel down, and Brer Rabbit took a running start and light up on his back.

They done had all the arrangements made, and when Brer Tiger come along, he seed a sight that make 'im open his eyes. There was Brer Rabbit on top of old Brer Elephant back, and there was old Brer Elephant with his behind leg tied to the tree, a-swinging backwards and forwards, and a-rocking from side to side.

Brer Tiger look at 'em a little while, and the notion strike 'im that Brer Rabbit was caught up there and can't get down. This make Brer Tiger laugh till he show all his tooths. He walk 'round, he did, and feel so good he rub hisself against the saplings just like you seen cats rub up against chair-legs. Then he sat down flat of the ground and grin at Brer Rabbit, and lick his chops. Old Brer Elephant swing backwards and forwards, and rock from side to side.

Brer Tiger allow, "I told you I'd get you, Brer Rabbit, and now I done come after you."

Brer Elephant swing backwards and forwards, and rock from side to side.

Brer Rabbit say, "You done come, is you? Well, just wait a minute till I get through skinning this critter what I just caught. Stay there till I get good and ready for you."

Den Brer Rabbit dip down his head by old Brer Elephant's ear and whisper, "Squall when I put my nose on yo' neck. Don't be scared. Just squall."

Then old Brer Elephant squeal through that snout of his'n; you might've heared 'im a mile or more.

Brer Rabbit holler out, "Just wait, Brer Tiger. Yo' turn'll come directly. It'll go mighty hard with you if I have to run after you."

Old Brer Elephant swing backwards and forwards, and rock from side to side. Every time Brer Rabbit'd nibble behind his ears, he'd squall out and trample the ground.

When he first seed Brer Rabbit up there on old Brer Elephant's back, Brer Tiger sort of sat hisself on the ground for to make a jump at 'im, but time he see how old Brer Elephant hollering and prancing, Brer Tiger rise and begin to back off. A hickory nut fell off of a tree and hit the ground, and Brer Tiger jump like somebody shot at 'im.

When Brer Rabbit see this, it tickle 'im so that he come mighty nigh laughing out loud. But he dip his head down, and make like he gnawing old Brer Elephant on the neck, and old Brer Elephant, he squall loud as he can. Brer Rabbit prance up and down on Brer Elephant back like he hunting for a more tender place, and holler out, "Don't go 'way, Brer Tiger. Just wait; I'll be ready for you directly."

Brer Tiger he back off, and Brer Elephant swing backwards and forwards, and rock from side to side, and squeal through his snout.

Brer Rabbit holler out, 'No use to get weak-kneed, Brer Tiger. Give me time. This Elephant blood taste salty. It make me dry. You won't have long to wait."

Brer Tiger, he back off and back off. Brer Rabbit, he make out he biting old Brer Elephant on the ear. Old Brer Elephant swing backwards and forwards, and rock from side to side, and snort and trample the grass.

About that time Brer Rabbit make like he going to come down. He make like he hunting for a safe place to jump, and when Brer Tiger see that, he made a break and just fell over hisself trying to get out of reach. Brer Rabbit holler at 'im, but he ain't stop; he just keep a-running, and it was many a long day 'fore the critters seed 'im back there in that settlement.