23. Mr. Rabbit and Mr. Bear. Text Source: Uncle Remus, His Songs and His Sayings by Joel Chandler Harris. Online at Project Gutenberg. I have removed the frame material and standardized the spelling; click here for the original spelling plus all notes to the story.

There was one season when Brer Fox say to hisself that he expect he better whirl in and plant a goober-patch, and in them days, man, it was touch and go. The word weren't more than out of his mouth before the ground was broked up and the goobers was planted.

Old Brer Rabbit, he sat off and watch the motions, he did, and he sort of shut one eye and sing to his chilluns, "Ti-yi! Tungalee! I eat 'em pea, I pick 'em pea. It grow in the ground, it grow so free; Ti-yi! Them goober pea."

Sure enough when the goobers begun to ripen up, every time Brer Fox go down to his patch, he find where somebody been grabbling amongst the vines, and he get mighty mad. He sort of suspect who the somebody is, but old Brer Rabbit he cover his tracks so cute that Brer Fox don't know how to catch him.  By and by, one day Brer Fox take a walk all round the ground-pea patch, and it weren't long before he find a crack in the fence where the rail done been rub right smooth, and right there he set him a trap.

He took and bend down a hickory sapling, growing in the fence-corner, and tie one end of a plow-line on the top, and in the other end he fix a loop-knot, and that he fasten with a trigger right in the crack.

While he was a-fixing up a tale for Brer Fox, he hear a lumbering down the road, and presently here come old Brer Bear ambling along from where he been taking a bee-tree. Brer Rabbit, he hail him, "Howdy, Brer Bear!" 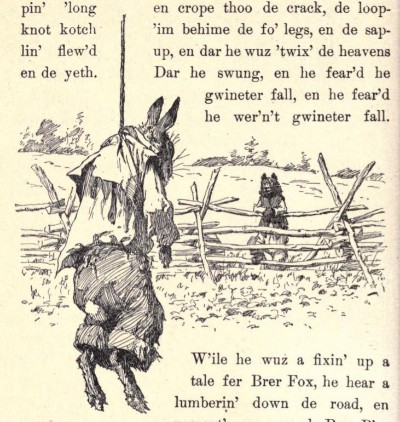 Brer Bear, he look 'round and by and by he see Brer Rabbit swinging from the sapling, and he holler out, "Heyo, Brer Rabbit! How you come on this mornin'?" 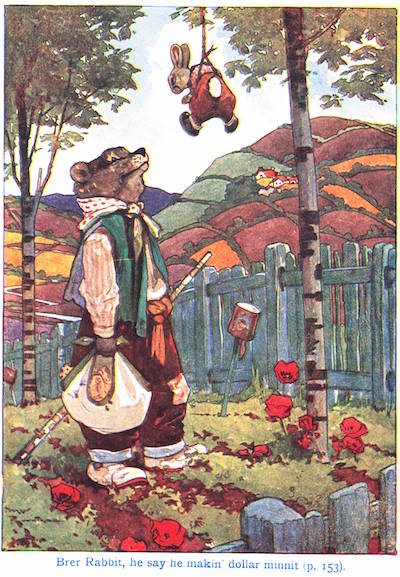 Then Brer Bear, he ask Brer Rabbit what he doing up there in the elements, and Brer Rabbit, he up and say he making dollar minute.

Brer Bear, he say how.

Brer Rabbit say he keeping crows out of Brer Fox's ground pea patch, and then he ask Brer Bear if he don't want to make dollar minute, 'cause he got big family of chilluns for to take care of, and then he make such nice scarecrow.

Brer Bear allow that he take the job, and then Brer Rabbit show him how to bend down the sapling, and it weren't long before Brer Bear was swinging up there in Brer Rabbit's place. 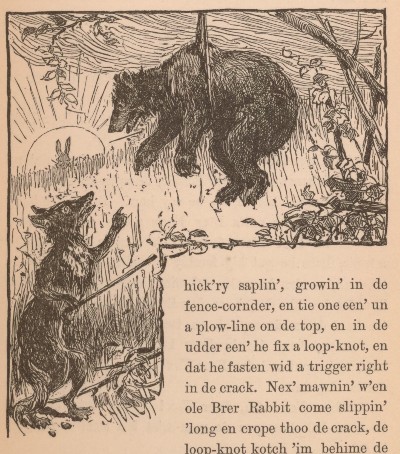 Then Brer Rabbit, he put out for Brer Fox house, and when he got there he sing out, "Brer Fox! Oh, Brer Fox! Come out here, Brer Fox, an' I'll show you the man what been stealin' yo' goobers." 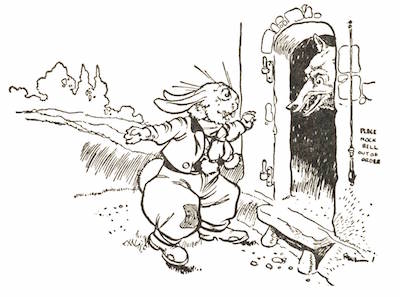 Brer Fox, he grab up his walking-stick, and both of 'em went running back down to the goober-patch, and when they got there, sure enough, there was old Brer Bear. 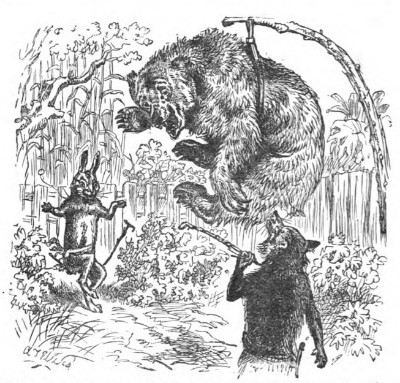 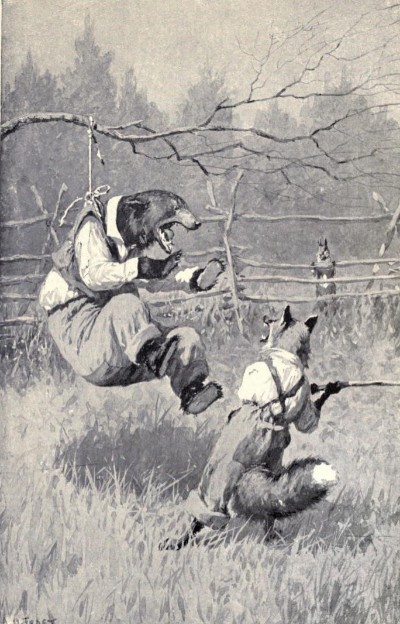 And Brer Fox, he draw back with the walking cane, and blip he took him, and every time Brer Bear'd try to explain, Brer Fox'd shower down on him. 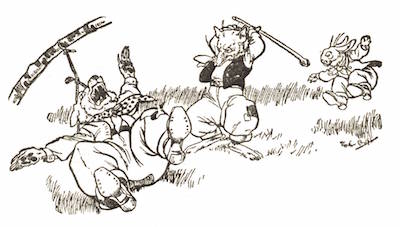 Whiles all this was going on, Brer Rabbit, he slip off and get in a mud-hole and just left his eyes sticking out, 'cause he know'd that Brer Bear'd be a-coming after him.

Sure enough, by and by here come Brer Bear down the road, and when he get to the mud-hole, he say, "Howdy, Brer Frog; is you seed Brer Rabbit go by here?" 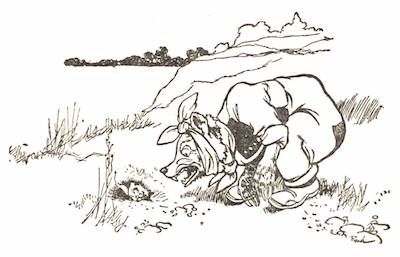 "He just gone by," says Brer Rabbit, and old man Bear took off down the road like a scared mule, and Brer Rabbit, he come out and dry hisself in the sun, and go home to his family same as any other man. 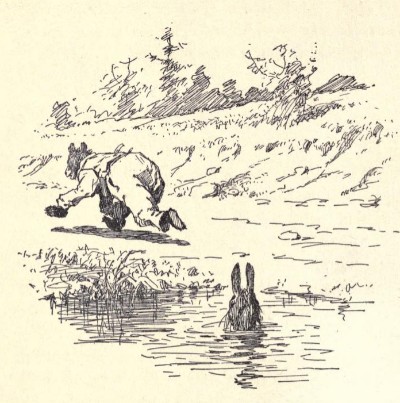