C111. How the Terrapin Was Taught to Fly

6: How the Terrapin Was Taught to Fly. Text Source: Daddy Jake, The Runaway by Joel Chandler Harris. Online at Hathi Trust. I have removed the frame material and standardized the spelling; click here for notes to the story.

This make old Brer Terrapin feel mighty good, and he say he ready for to begin right now, but Brer Buzzard say he ain't got time just then, but he'll be sure and come 'round the next day and give old Brer Terrapin the first lesson.

Ole Brer Terrapin, he sat there and wait, he did, and though he nodded here and there through the night, it look like to him that day ain't never going to come. He wait and he wait, he did, but by and by the sun riz, and it weren't so mighty long after that 'fore here come Brer Buzzard sailing along. He sailed 'round and 'round, and every time he sail 'round he come lower, and after while he lit.

Brer Buzzard, he took and start off easy, and he move so slick and smooth and swift that Brer Terrapin laugh and allow that he ain't had no such sweet riding since he crossed the river in a flat. He sail 'round and 'round, he did, and give Brer Terrapin a good ride, and then by and by he sail down to the ground and let Brer Tarryin slip off of he back.

Next day he come 'round again, old Brer Buzzard did, and give Brer Terrapin another good ride, and the next day he done the same, and he keep on doing this a-way, till after while Brer Terrapin got the conceit that he can do some flying on he own hook. So he up and ask Brer Buzzard for call 'round one more time, and give him a good start.

Gentlemens! It tickles me every time it come in my mind, that it do! Well, sir, old Brer Buzzard was that full of rascality that he ain't got no better sense than to come, and the next day he sail up, he did, bright and yarly. He lit on the grass, and old Brer Terrapin, he crept up on he back, and then Brer Buzzard riz. He riz up in the elements, now, and when he get up there he sort of fetched a flirt and a swoop and slid out from under Brer Terrapin.

Old Brer Terrapin, he flapped he foots and wagged he head and shook he tail, but all this ain't done no good. He start off right-side up, but he ain't drop far, 'fore he begun to turn somersaults up there, and down he come on he back —kerblam—m—m—! And if it hadn't but have been for the strength of he shell, he'd've got bust wide open. He lay there, old Brer Terrapin did, and try to ketch he breath and he groan and he pant like every minute going to be next.

Old Brer Buzzard, he sail 'round, he did, and look at Brer Terrapin, and by and by he lit for to make inquirements.

"Brer Terrapin, how you feel?" says he. 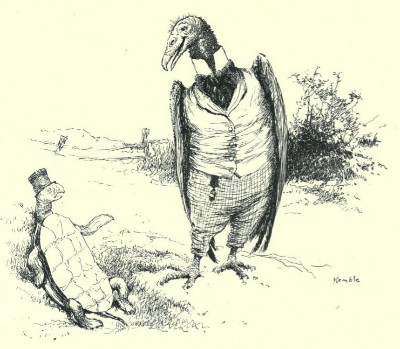 "Well, Brer Terrapin, I told you not to try to fly," says he.

"Hush up, Brer Buzzard!" says he; 'I flewed good as anybody, but you forgot to learn me how to light. Flying is easy as falling, but I don't expect I can learn how to light, and that's where the trouble come in," says he.

Well, the goodness and the gracious! That put me in mind of the time when old Brer Rabbit make a bet with Brer Fox. If I ain't make no mistakes, old Brer Rabbit bet Brer Fox that he can go the highest up in the elements, and not clam no hollow tree neither. Brer Fox, he took him up, and they appointed the day for the trial to come off.

Whiles they was making all their arrangements, Brer Fox hear talk that Brer Rabbit have done gone and hire Brer Buzzard for to tote him way above the tops of the trees. Soon as he hear this, Brer Fox went to Brer Buzzard, he did, and told him that he give him a pot of gold if he'd whirl in and carry Brer Rabbit clean out and the county. Brer Buzzard allow that he was the very man for to do that kind of business.

Brer Fox laugh when he see this, and allow, sezee, "Folks, if you all got any interest in old Brer Rabbit, you just better tell him good-by, 'cause you won't see him no more in there diggings."

This make all the other critters feel mighty good, 'cause in them days old Brer Rabbit was a terrifier, that he was. But they all sat there, they did, and keep their eye on Brer Buzzard, which he keep on getting higher and higher, and littler and littler. They look and they look, and by and by they sort of see Brer Buzzard flop first one wing, and then the other. He keep on flopping this a-way, and every time he flop, he get nigher and nigher the ground. He flop and fall, and flop and fall, and circle 'round, and by and by he come close to the place where he start from, and him and Brer Rabbit come down ker-flip! And Brer Rabbit ain't no sooner hit the ground than he rush off in the bushes, and sat there for to see what going to happen next.

When old Brer Buzzard got 'way up in the elements, he allow, he did, "We are going on a mighty long journey, Brer Rabbit."

Brer Rabbit he laugh like a man what's a-driving a plow-horse with a bridoon bit. "You may be a-going on a long journey, Brer Buzzard; I don't dispute that," says he, "but it'll be after you done carried me back where we start from."

Then Brer Buzzard he up and tell Brer Rabbit about the bargain he done make with Brer Fox. This make Brer Rabbit laugh worse than before.

"Lord, Brer Buzzard," says he, "when it come to making that kind of bargain, you ought to make it with me, 'cause I'm a long ways a better trader than what Brer Fox is."

Brer Buzzard he don't respond to that, but he keep on flying higher and higher, and further and further away. By and by Brer Rabbit begun to get kind of uneasy, and he allow , "Look like to me we done come far enough, Brer Buzzard," says he, "and I'll be mighty much obliged if you carry me back."

By and by Brer Rabbit ask him again, but Brer Buzzard keep on flying further. Then old Brer Rabbit he allow, says he, "If I got to just naturally make you go back, I expect I better start in right now," says he.

Then when he open the wing out and catch hisself, Brer Rabbit holler out, "Is you going back, Brer Buzzard?"

Brer Buzzard ain't say nothing, and then Brer Rabbit reach down and bit him under the other wing. It keep on this a-way till it got so that Brer Rabbit can guide Brer Buzzard along just same as if he done been broke to harness, and that's the way he made him carry him back. 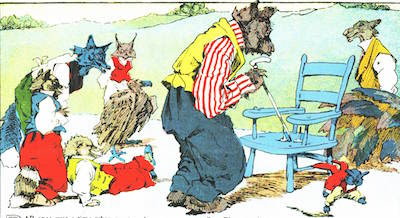 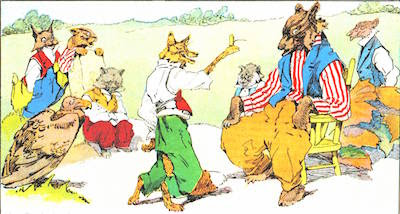 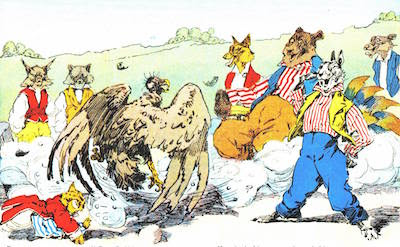 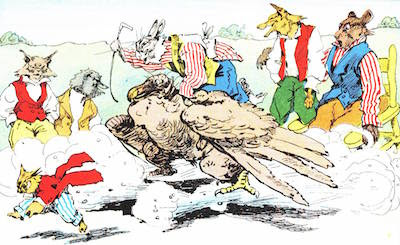 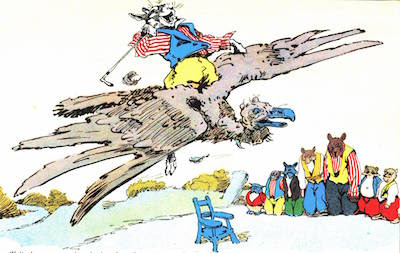 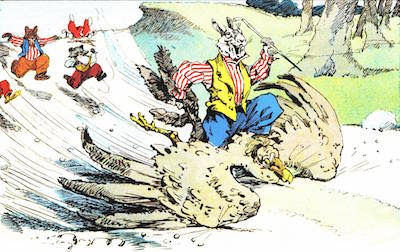