11. Mr. Wolf Makes a Failure. Text Source: Uncle Remus, His Songs and His Sayings by Joel Chandler Harris. Online at Project Gutenberg. I have removed the frame material and standardized the spelling; click here for the original spelling plus all notes to the story.

Brer Fox feel so bad, and he get so mad about Brer Rabbit,  that he don't know what to do, and he look mighty down-hearted. By and by, one day whiles he was going along the road, old Brer Wolf come up with him. 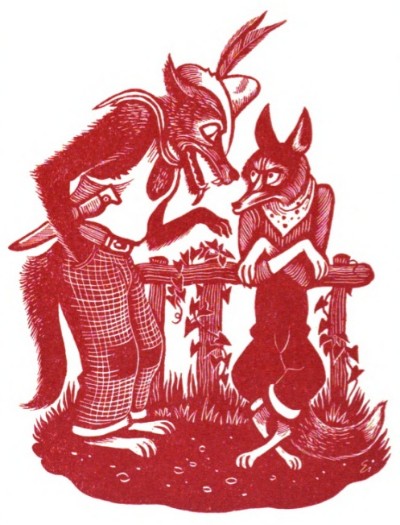 When they done howdying and asking after one another's family connection, Brer Wolf, he allow, he did, that there was something wrong with Brer Fox, and Brer Fox, he allowed there weren't, and he went on and laugh and make great to do 'cause Brer Wolf look like he suspicion something. 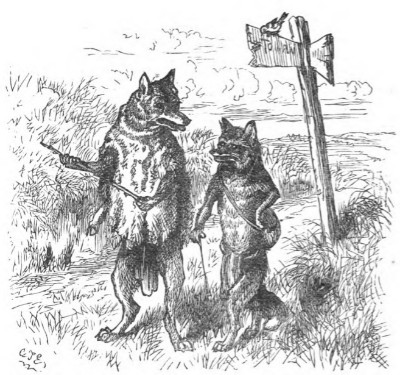 But Brer Wolf, he got mighty long head, and he sort of broach about Brer Rabbit's carryings on, 'cause the way that Brer Rabbit deceive Brer Fox done got to be the talk of the neighborhood. 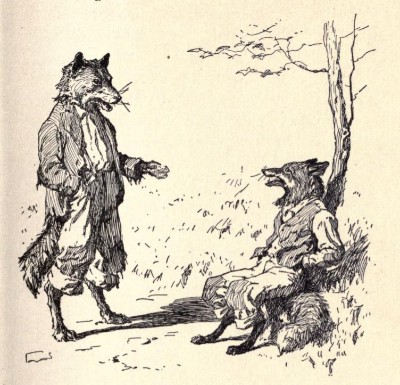 Then Brer Fox and Brer Wolf they sort of palavered on, they did, till by and by Brer Wolf heup andsay that he done got plan fix for to trap Brer Rabbit. Then Brer Fox say how. Den Brer Wolf up and tell him that the way for to get the drop on Brer Rabbit was to get him in Brer Fox house. Brer Fox don't know Brer Rabbit of old, and he know that sort of game done wore to a frazzle, but Brer Wolf, he talk mighty persuading. 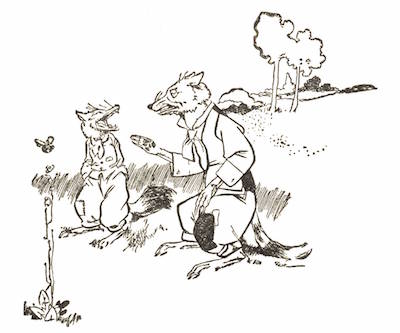 "How you gonna get him there?" says Brer Fox, says he.

"Fool him there," says Brer Wolf, says he.

"Who gonna do the foolin'?" says Brer Fox, says he.

This look like mighty nice game, and Brer Fox agreed. So then he amble off home, and Brer Wolf, he march off to Brer Rabbit house. When he got there, it look like nobody at home, but Brer Wolf he walk up and knock on the door—blam! blam! Nobody come. Then he lam aloose and knock again—blim! blim!

"Who there?" says Brer Rabbit, says he.

"Too many friends spoils the dinner," says Brer Rabbit, says he; "which one's this?" says he. 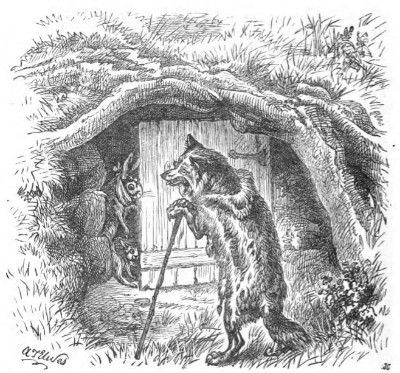 By this time Brer Rabbit done come to the door, with his head tied up in a red handkerchief.

"Goin' after it now," says Brer Wolf, says he. "I just call by for to bring the news. I went down to Brer Fox house little bit ago, an' there I found him stiff," says he. 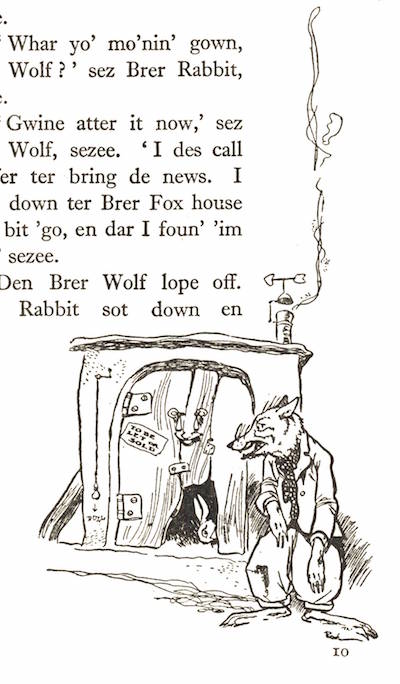 Den Brer Wolf lope off. Brer Rabbit sat down and scratch his head, he did, and by and by he say to hisself that he believe he sort of drop round by Brer Fox house for to see how the land lay. No sooner said than done. Up he jump, and out he went.

When Brer Rabbit got close to Brer Fox house, all look lonesome. Then he went up nigher. Nobody stirring. Then he look in, and there lay Brer Fox stretch out on the bed just as big as life. Den Brer Rabbit make like he talking to hisself. 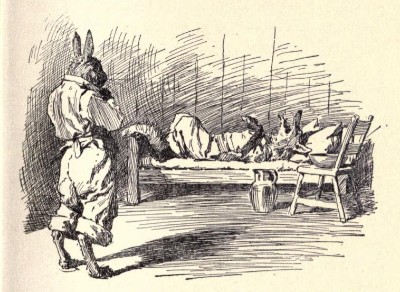 "Nobody round for to look after Brer Fox—not even Brer Turkey Buzzard ain't come to the funeral," says he. "I hope Brer Fox ain't dead, but I 'spect he is," says he. "Even down to Brer Wolf done gone an' left him. It's the busy season with me, but I'll set up with him. He seem like he dead, yet he mayn't be," says Brer Rabbit, says he. "When a man go to see dead folks, dead folks always raises up their behind leg and hollers, 'wahoo!'" says he.

Den Brer Rabbit he talk little louder, "Mighty funny. Brer Fox look like he dead, yet he don't do like he dead. Dead folks hoists their behind leg and hollers 'wahoo!' when a man come to see 'em," says Brer Rabbit, says he. 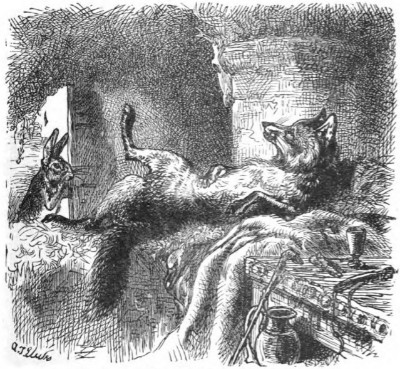 
Sure enough, Brer Fox lift up his foot and holler 'wahoo!' and Brer Rabbit he tear out the house like the dogs was after him. 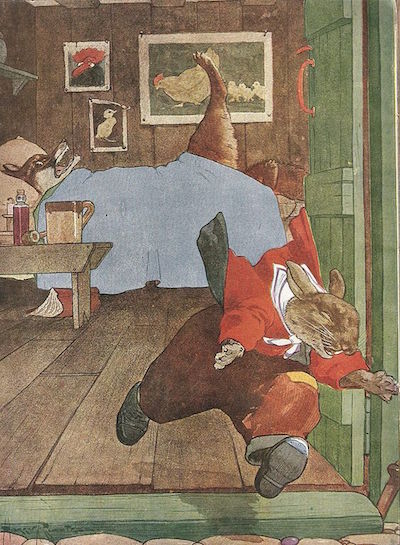 Brer Wolf mighty smart, but next time you hear from him, he'll be in trouble. You just hold your breath and wait. 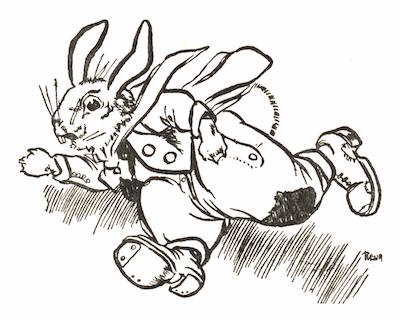