28. The End of Mr. Bear. Text Source: Uncle Remus, His Songs and His Sayings by Joel Chandler Harris. Online at Project Gutenberg. I have removed the frame material and standardized the spelling; click here for the original spelling plus all notes to the story.


BRER BEAR and THE BEES

One time when Brer Rabbit was going loping home from a frolic what they been having up at Miss Meadows's, who should he happen up with but old Brer Bear. Course, after what done pass 'twixt 'em there weren't no good feelings between Brer Rabbit and old Brer Bear, but Brer Rabbit, he wan to save his manners, and so he holler out, "Heyo, Brer Bear! How you come on? I ain't seed you in a coon's age. How all down at yo' house? How Miss Brune an' Miss Brindle?" 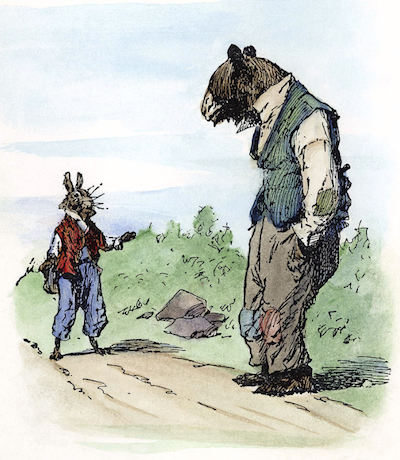 Last Brer Rabbit, he up and say, says he, "Brer Bear, I 'spect I got some business cut out for you," says he.

"What that, Brer Rabbit?" says Brer Bear, says he.

"Whiles I was cleaning up my new-ground day 'fore yesterday," says Brer Rabbit, says he, 'I come across one of these here old time bee-trees. It start hollow at the bottom, and stay hollow plumb to the top, and the honey's just naturally oozing out, and if you'll drop yo' engagements and go along with me," says Brer Rabbit, says he, "you'll get a bit that'll last you and yo' family till the middle of next month," says he.

They stand 'round and talk biggity, they did, till by and by Brer Rabbit, he up and say, says he, "You do the climbin', Brer Bear, an' I'll do the rushing 'round; you climb up to the hole, an' I'll take this here pine pole an' shove the honey up where you can get her," says he. 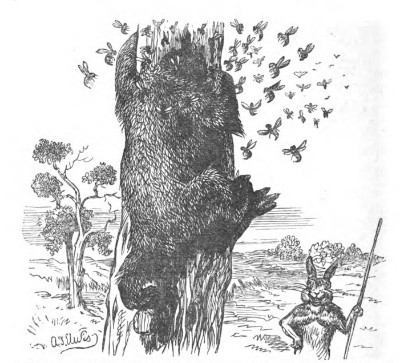 Old Brer Bear, he spit on his hands and skinned up the tree, and jam his head in the hole, and sure enough, Brer Rabbit, he grab the pine pole, and the way he stir up them bees was sinful—that's what it was. It was sinful.

And the bees they swarmed on Brer Bear's head, till before he could take it out of the hole it was done swell up bigger than a dinner-pot, and there he swung, and old Brer Rabbit, he dance 'round and sing:

Tree stand high, but honey mighty sweet—
Watch them bees with stingers on their feet.

But there old Brer Bear hung, and if his head ain't shrunk, I speck he hanging there yet—that what I expect. 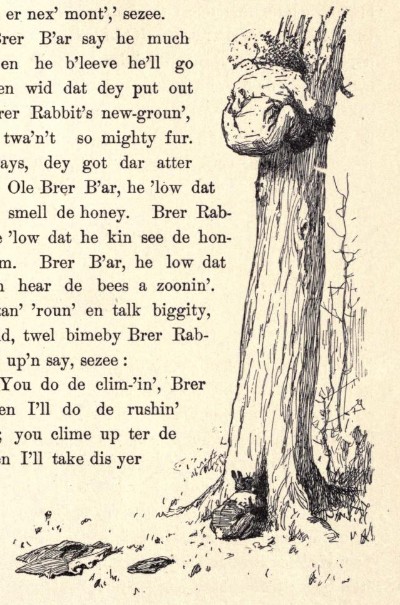