6: Why Brother Wolf Didn't Eat the Little Rabbits. Text Source: Uncle Remus and His Friends by Joel Chandler Harris. Online at Hathi Trust. I have removed the frame material and standardized the spelling; click here for notes to the story.

Brer Wolf hold his head towards 'em and allow, "They are mighty fat."

The little Rabs frisk and frolic, and play further off, but they keep their ears primed.

Brer Wolf look at 'em and allow, "Ain't they slick and pretty?"

De little Rabs play off further and further, but they keep their ears open.

Brer Wolf smack his mouth and allow, "They are juicy and tender."

Brer Fox roll his eye and say, "Man, ain't you goin' to hush up, 'fore you give me the fidgets?"

The little Rabs they frisk and they frolic, but they hear everything that pass.

Brer Wolf lick out his tongue quick, and allow, "Let's us whirl in and eat 'em."

The little Rabs play off further and further, but they know exactly what going on. They frisk and they frolic, but they got their ears wide open.

Then Brer Wolf make a bargain with Brer Fox that when Brer Rabbit get home, one of 'em would get him wrapped up in a dispute about first one thing and then another, whiles the other one would go out and catch the little Rabs.

Brer Fox allow, "You better do the talkin', Brer Wolf, and lemme coax the little Rabs off. I got more winnin' ways with chilluns than what you is."

Brer Wolf say, "You can't make gourd out of pumpkin, Brer Fox. I ain't no talker. Yo' tongue lots slicker than mine. I can bite lots better than I can talk. Them little Rabs don't want no coaxin'; they wants catchin' — that what they wants. You keep old Brer Rabbit busy, and I'll tend to the little Rabs."

Both of 'em know'd that whichever caught the little Rabs, the other one ain't going smell hide nor hair of 'em, and they flew up and got to disputing, and whiles they was disputing and going on that away, the little Rabs put off down the road — hlickety-blickety — for to meet their daddy. 'Cause they know'd if they stayed there they'd get in big trouble.

They went off down the road, the little Rabs did, and they ain't gone, so mighty fur before they meet their daddy coming long home. He had his walking cane in one hand and a jug in the other, and he look as big as life, and twice as natural.

Brer Rabbit say, "Nothing but a jug of molasses." 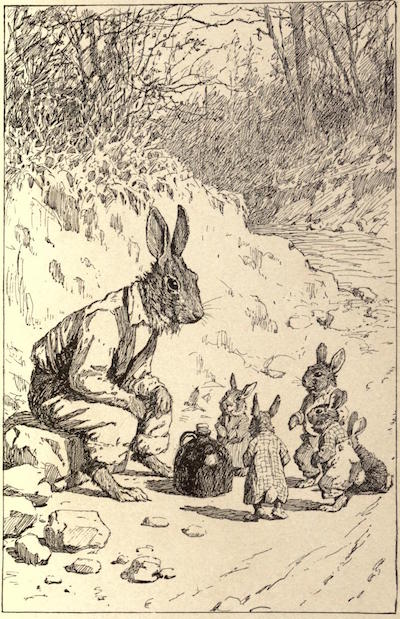 Then old Brer Rabbit set the jug down in the road and let 'em lick the stopper a time or two, and after they done get their wind back, they up and tell him about the agreement that Brer Wolf and Brer Fox done make, and about the dispute what they had. Old Brer Rabbit sort of laugh to hisself, and then he pick up his jug and jog on towards home. When he get most there he stop and tell the little Rabs for stay back there out of sight, and wait till he call 'em before they come. They was mighty glad to do just like this, 'cause they'd done seed Brer Wolf tooths, and Brer Fox red tongue, and they huddle up in the broom-sage as still as a mouse in the flour barrel.

Brer Rabbit went on home, and sure enough, he find Brer Wolf and Brer Fox waiting for him. They'd done settle their dispute, and they was sitting there just as smiling as a basket of chips. They pass the time of day with Brer Rabbit, and then they ask him what he got in the jug. Brer Rabbit hummed and hawed, and looked sort of solemn.

Brer Wolf look like he was pleased to find out what was in the jug, and he keep a pestering Brer Rabbit about it; but Brer Rabbit just shake his head and look solemn, and talk about the weather and the crops, and one thing and another. By and by Brer Fox make out he was going after a drink of water, and he slip out, he did, for to catch the little Rabs. Time he get out the house, Brer Rabbit look all 'round to see if he listening, and then he went to the jug and pull out the stopper.

He hand it to Brer Wolf and say, "Taste that."

Brer Wolf taste the molasses, and smack his mouth. He allow, "What kind of truck that? It sure is good."

Brer Rabbit get up close to Brer Wolf and say, "Don't tell nobody. It's Fox-blood."

Brer Wolf look astonished. He allow, "How you know?"

Brer Rabbit say, "I knows what I knows!"

Brer Rabbit say, "You can get some more for yo'self easy enough, and the fresher it is, the better."

Brer Wolf allow, "How you know?"

Brer Rabbit say, "I knows what I knows!"

Then after so long a time, after Brer Rabbit got done laughin', he call up the little Rabs, give 'em some molasses for supper, and spanked 'em and sent 'em to bed. He spanked 'em to make 'em grow, just to make 'em grow. Young critters is got to have their hide loosened that way. As for Brer Wolf and Brer Fox, how I know what happened? Much as I can do to follow the tale when it keeps in the big road, let alone to keep up with them critters whiles they gone sailing through the woods. The tale ain't pursue on after them no further than the place where they make their disappearance.
Posted by Laura Gibbs at 5:59 PM