Seven Tales of Uncle Remus, 5: Brother Bear Learns to Comb His Head.
The dialect version of this story was published in Dixie (April 1892), and Harris later revised the story to include in Little Mr. Thimblefinger, online at Hathi Trust. Harris removed the dialect forms and I have removed the frame material; click here for notes to the story.

Did I ever tell you how Brother Bear learned to comb his hair? Well, in my courting-days, you know, I used to go around fixed up in style. Many and many a time I've heard the girls whisper to one another and say, "Oh, my! Ain't Mr. Rabbit looking spruce to-day?" There was one season in particular that I was careful to primp up and look sassy. I put bergamot oil on my hair, and kept it brushed so slick that a fly would slip up and cripple himself if he lit on it.

It so happened that my road took me by Brother Bear's house every day — right by the front gate. Sometimes Mrs. Bear would be hanging out clothes on the fence, sometimes she would be sweeping off the front porch, and sometimes she would be working in the garden; but no matter what she was doing I'd cough and catch her eye, and then I'd bow just as polite as you please.

Mrs. Bear says, says she, "Honey, you ain't asleep, are you? Brother Rabbit has just gone along by the gate dressed to kill."

A grumbling sound came from the house.

Mrs. Bear says, says she, "I wonder where he goes every day, with his hair combed so slick?"

Grumble in the house.

Grumble in the house.

"Well, I don't care if he is a grand rascal, he looks nice and clean, and that's more than anybody can say about you," says Mrs. Bear.

Growl in the house.

Mrs. Bear says, says she, "Oh, you can rip and rear, but Brother Rabbit goes about with his head combed, and he looks lots better that way than them that go about with rat nests in their hair — lots better."

I thought to myself, thinks I, that I'd better be getting on toward home, and so I crept back up the fence and went on my way.

The next day as I was going along the road, who should I meet but old Brother Bear himself. Well, here's a row, thinks I, but it didn't turn out so. Brother Bear was just as polite to me as I had been to his old woman.

We passed the time of day and talked about the crops a little while, but I could see that Brother Bear had something serious on his mind. finally, he shuffled around and sat down on a stump beside the roadside.

"Brother Rabbit," he says, says he, "how in the world do you manage to keep your hair so slick and smooth all the time? My old woman sees you passing by every day, and she's been worrying the life out of me because I don't keep my hair combed that way. So I said to myself I'd ask you the very next time I met you."

Brother Bear was looking pretty rough and tough, and so I says, says I, "You look as if she had been tousling you about it."

He hung his head at this, and shuffled around and changed his seat. Says he, "No, it's not so bad as all that, but I want to ask you plump and plain, if it's a fair question, how you comb your hair so it will stay nice?"

I looked at him and shook my head. Says I, "Brother Bear, I don't comb my hair."

He was so much surprised that he opened his mouth, and his tongue hung out on one side — a big, red tongue that had known the taste of innocent blood.

Says he, "Brother Rabbit, if you don't comb your hair, how in the wide world do you keep it so smooth?"

Says I, "Easy enough. Every morning my old woman takes the axe and chops my head off. Yes, she takes the axe and chops off my head," Mr. Rabbit continued, as solemn as a judge, "and carries it out in the yard, where she can have light to see and room to work, and then she combs it and combs it until every kink comes straight and every hair is in its place. Then she brings my head back, puts it where it belongs, and there it is — all combed."

Brother Bear seemed to be very much astonished. Says he, "Doesn't it hurt, Brother Rabbit?"

Says I, "No more than enough to make my appetite good."

The upshot of it was that Brother Bear went home and told Mrs. Bear how I had my head combed every day. Woman-like, she wanted to try it at once; so Brother Bear laid his head on a log of wood, and Mrs. Bear got the axe and raised it high in the air. Brother Bear had just time to squall out, "Cut it easy, old woman!" when the axe fell on his neck, and there he was: it killed him; that's what the neighbors said. 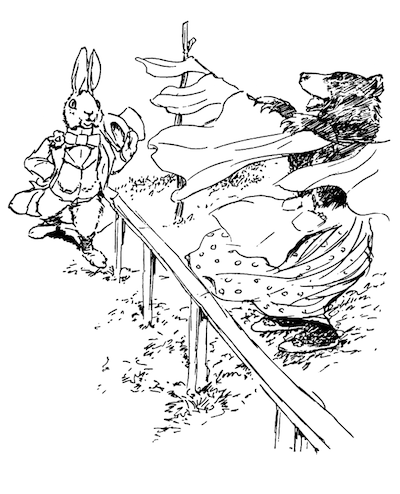