Well, Brer Rabbit rid Brer Fox up, he did, and tied him to the rack, and then sat out in the piazza with the gals a-smoking on his cigar with more proudness than what you most ever see. 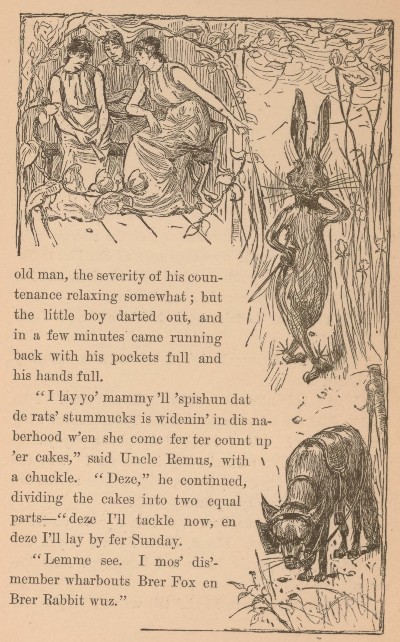 They talk, and they sing, and they play on the piano, the gals did, till by and by it come time for Brer Rabbit for to be going, and he tell 'em all good-by, and strut out to the horse-rack same's if he was the king of the patter-rollers, and then he mount Brer Fox and ride off. 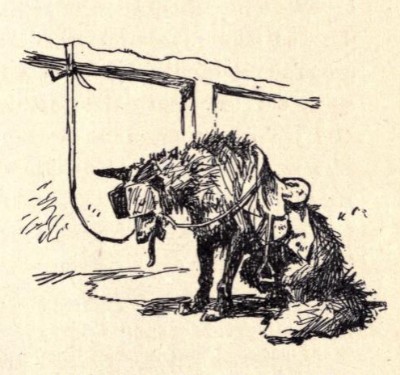 Brer Fox ain't saying nothing at all. He just rack off, he did, and keep his mouth shut, and Brer Rabbit knowed there was business cooking up for him, and he feel monstrous skittish. Brer Fox amble on till he get in the long lane, out of sight of Miss Meadows's house, and then he turn loose, he did. 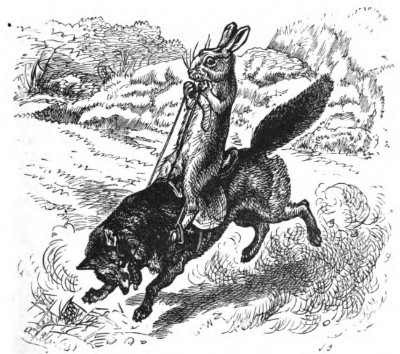 He rip and he rear, and he cuss, and he swear; he snort and he cavort. He was trying for to fling Brer Rabbit off of his back, bless your soul! But he just might as well of wrestle with his own shadow. 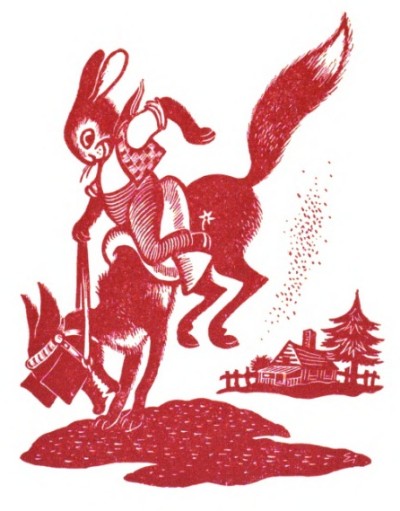 Every time he hump hisself Brer Rabbit slap the spurrers in him, and there they had it, up and down. 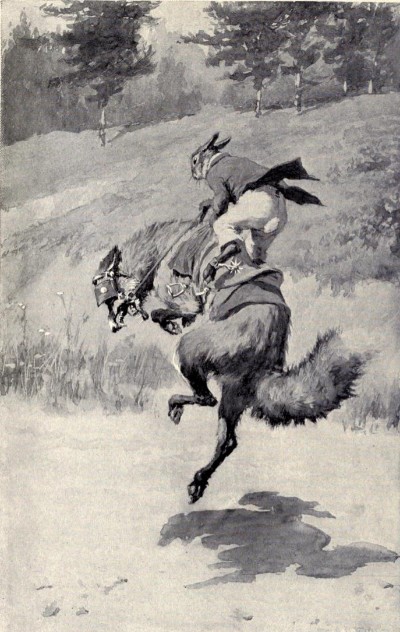 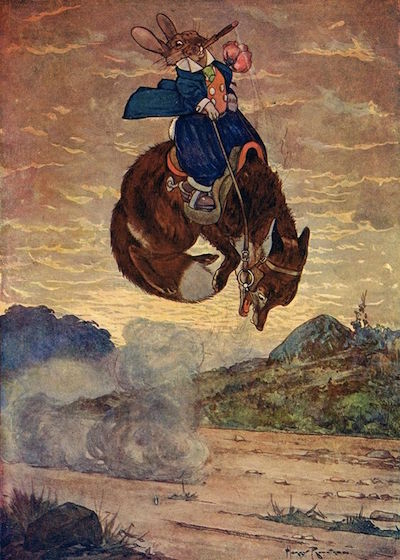 They kept on going on this way till by and by Brer Fox lay down and roll over, he did, and this sort of unsettle Brer Rabbit, but by the time Brer Fox got back on his footses again, Brer Rabbit was going through the underbrush more samer than a race-horse. 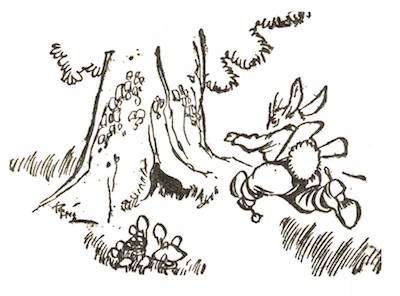 Brer Fox he lit out after him, he did, and he push Brer Rabbit so close that it was about all he could do for to get in a hollow tree. Hole too little for Brer Fox for to get in, and he had to lay down and rest and gather his mind together. 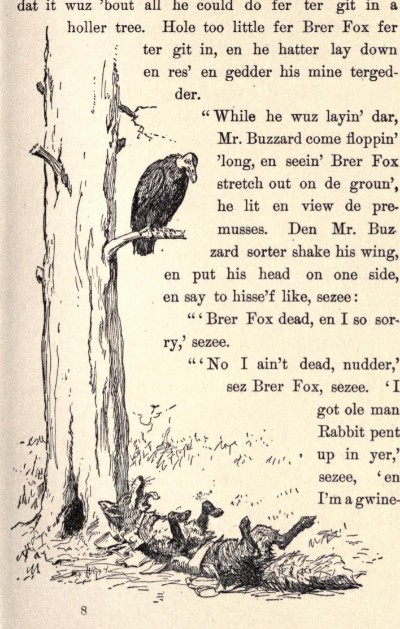 While he was laying there, Mr. Buzzard come flopping along, and seeing Brer Fox stretch out on the ground, he lit and view the premises. Then Mr. Buzzard sort of shake his wing, and put his head on one side, and say to hisself like, says he, "Brer Fox dead, an' I so sorry," says he.

Then, after some more palaver, Brer Fox make a bargain that Mr. Buzzard was to watch the hole, and keep Brer Rabbit there whiles Brer Fox went after his axe. Then Brer Fox, he lope off, he did, and Mr. Buzzard, he took up his stand at the hole.

By and by, when all get still, Brer Rabbit sort of scramble down close to the hole, he did, and holler out, "Brer Fox! Oh! Brer Fox!"

Brer Fox done gone, and nobody say nothing. Then Brer Rabbit squall out like he was mad; says he, "You needn't talk 'less you want to," says he; "I knows you are there, and I ain't carin'," says he. "I just want to tell you that I wish mighty bad Brer Tukkey Buzzard was here," says he.

Then Mr. Buzzard try to talk like Brer Fox, "What you want with Mr. Buzzard?" says he. 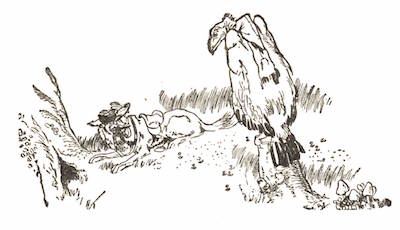 "Oh, nothing in particular, 'cept there's the fattest gray squirrel in here that ever I see," says he, "an' if Brer Turkey Buzzard was 'round he'd be mighty glad for to get 'im," says he.

"Well, there's a little hole 'round on the other side of the tree," says Brer Rabbit, says he, "an' if Brer Turkey Buzzard was here so he could take up his stand there," says he, "I'd drive that squirrel out," says he. 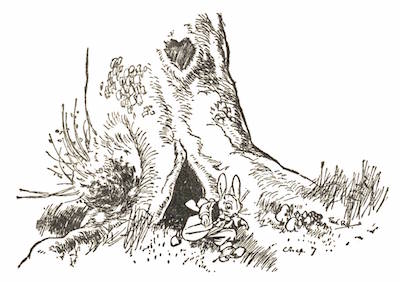 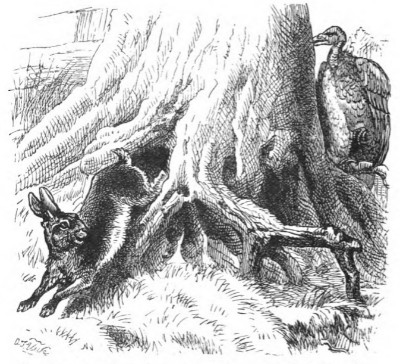 Then Brer Rabbit kick up a racket, like he were driving something out, and Mr. Buzzard he rush 'round for to catch the squirrel, and Brer Rabbit, he dash out, he did, and he just fly for home. 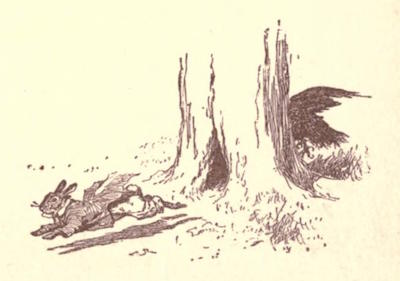