70. Brother Rabbit Rescues Brother Terrapin. Text Source: Nights with Uncle Remus by Joel Chandler Harris. Online at Project Gutenberg. I have removed the frame material and standardized the spelling; click here for the original spelling plus all notes to the story.

One time Brer Fox was going on down the big road, and he look ahead and he see old Brer Terrapin making he way on towards home. Brer Fox allow this a mighty good time for to nab old Brer Terrapin, and no sooner is he thunk it than he put out back home, which it weren't but a little ways, and he get him a bag. He come back, he did, and he run up behind old Brer Terrapin and flip him in the bag and sling the bag across he back and go galloping-up back home.

But whiles all this going on, where was old Brer Rabbit? Yes sir—that's it, where was he? And more than that, what you expect he was doing and where you reckon he were going? That's the way to talk it; whereabouts was he?

You can believe me or not believe just as you are mind to, but that there long-ear critter—that there hoppity-skippity—that there up-and-down-and-sailin'-'round Brer Rabbit, which you been hear me call he name 'fore this, he weren't so mighty far off whiles Brer Fox going along with that there bag slung across he back.

Let alone that, Brer Rabbit was sitting right there in the bushes by the side of the road, and whence he see Brer Fox go trotting by, he ask hisself what is it that critter got in that there bag.

He ask hisself, he did, but he don't know. He wonder and he wonder, yet the more he wonder the more he don't know. Brer Fox, he go trotting by, and Brer Rabbit, he sat in the bushes and wonder. By and by he allow to hisself, he did, that Brer Fox ain't got no business for to be trotting along down the road, toting doings which other folks don't know what they is, and he allow that there won't be no great harm done if he take after Brer Fox and find out what he got in that there bag.

With that, Brer Rabbit, he put out. He ain't got no bag for to tote, and he pick up he foots mighty pert. More than that, he took and took a nigh-cut, and by the time Brer Fox get home, Brer Rabbit done had time for to go 'round by the watermelon-patch and do some of he devilment, and then after that he took and sat down in the bushes where he can see Brer Fox when he come home.

By and by here come Brer Fox with the bag slung across he back. He unlatch the door, he did, and he go in and sling Brer Terrapin down in the corner, and sat down front of the hearth for to rest hisself.

Brer Fox ain't more than lit he pipe, 'fore Brer Rabbit stick he head in the door and holler, "Brer Fox! O Brer Fox! You better take your walking-cane and run down yonder. Coming along just now I hear a mighty fuss, and I look 'round and there was a whole passel of folks in your watermelon-patch just a-trampling 'round and a-tearing down. I hollered at 'em, but they ain't pay no attention to little man like I is. Make haste, Brer Fox! Make haste! Get your cane and run down there. I'd go with you myself, but my old woman ailing and I pleased to be making my way towards home. You better make haste, Brer Fox, if you want to get the good of your watermelons. Run, Brer Fox! Run!"

With that Brer Rabbit dart back in the bushes, and Brer Fox drop he pipe and grab he walking-cane and put out for he watermelon-patch, which it were down on the branch; and no sooner is he gone than old Brer Rabbit come out the bushes and make he way in the house.

He go so easy that he ain't make no fuss; he look 'round and there was the bag in the corner. He caught hold of the bag and sort of feel of it, and time he do this, he hear something holler, "Ow! Go 'way! Let me alone! Turn me loose! Ow!"

Brer Rabbit jump back astonished. Then 'fore you can wink your eye-ball, Brer Rabbit slap hisself on the leg and break out in a laugh. Then he up and allow, "If I ain't make no mistakes, that there kind of fuss can come from nobody in the round world but old Brer Terrapin."

Brer Terrapin, he holler, says he, "Ain't that Brer Rabbit?"

"Then whirl in and turn me out. Meal dust in my throat, grit in my eye, and I ain't can get my breath, scarcely. Turn me out, Brer Rabbit." Brer Terrapin talk like somebody down in a well.

Brer Rabbit, he holler back, "You are lots smarter than what I is, Brer Terrapin—lots smarter. You are smarter and perter. Pert as I come here, you is ahead of me. I know how you get in the bag, but I don't know how the name of goodness you tie yourself up in there, that I don't."

Brer Terrapin try to explain, but Brer Rabbit keep on laughing, and he laugh till he get he fill of laughing; and then he took and untie the bag and take Brer Terrapin out and tote him away off in the woods.

Then, when he done this, Brer Rabbit took and run off and get a great big hornet-nest what he see when he coming along. Brer Rabbit took and slap he hand across the little hole where the hornets goes in at, and there he had 'em. Then he took and took it to Brer Fox house, and put it in the bag where Brer Terrapin been.

He put the hornet-nes' in there and then he tie up the bag just like he find it. Yet 'fore he put the bag back in the corner, what do that critter do? That there critter grab that bag and slam it down against the floor, and hit it against the side of the house till he get them there hornets all stirred up, and then he put the bag back in the corner, and go out in the bushes to where Brer Terrapin waiting, and then both of 'em sat out there and wait for to see what the upshot going to be.

By and by, here come Brer Fox back from he watermelon-patch and he look like he mighty mad. He strike he cane down upon the ground, and do like he going take he revengeance out of poor old Brer Terrapin. He went in the door, Brer Fox did, and shut it after him. Brer Rabbit and Brer Terrapin listen, but they ain't hear nothing. 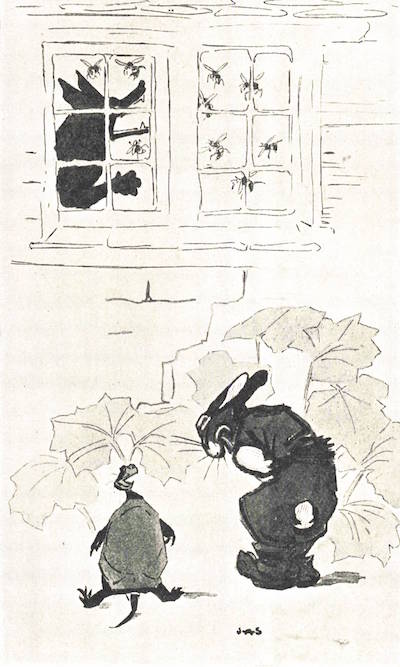 But by and by, first news you know, they hear the most audacious racket, to be sure. Seem like, from where Brer Rabbit and Brer Terrapin sitting that there was a whole passel of cows running 'round in Brer Fox house. They hear the chairs a-falling, and the table turning over, and the crockery breaking, and then the door flewed open, and out come Brer Fox, a-squalling like the Old Boy was after him. And such a sight as them the other critters seed then and there ain't never been seed before nor since.

Them there hornets just swarmed on top of Brer Fox. Eleven dozen of 'em hit at one time, and look like that there critter pleased to find out for hisself what pain and suffering is. They bit him and they stung him, and far as Brer Rabbit and Brer Terrapin can hear him, them hornets was just a-nailing him. Gentlemens! They give him brimstone and ginger!

Brer Rabbit and Brer Terrapin, they sat there, they did, and they laugh and laugh, till by and by, Brer Rabbit roll over and grab he stomach, and holler, "Don't, Brer Terrapin! Don't! One giggle more and you'll have to tote me."