4. Brother Rabbit Treats the Creeturs to a Race. Text Source: Uncle Remus and Brer Rabbit by Joel Chandler Harris. Online at Project Gutenberg. I have removed the frame material and standardized the spelling; click here for the original spelling plus all notes to the story.

That dust and wind, and rain, puts me in mind of the time when old Brer Rabbit got up a big race for to pleasure the other critters. it was the most funniest race you ever hear tell on.

Brer Rabbit went 'way off in the woods till he come to the Rainmaker's house. He knocked and went in, and he ask the Rainmaker if he can't fix it up so they can have a race between Brer Dust and Cousin Rain, for to see which can run the fastest. The Rainmaker growled and jowered, but by and by he agree, but he say that if it was anybody but Brer Rabbit, he wouldn't give it but one thunk.


Well, they fix the day, they did, and then Brer Rabbit put out to where the critters was staying at, and told 'em the news. They don't know how Brer Rabbit know, but they all want to see the race.

Now, him and the Rainmaker had fixed it up so that the race would be right down the middle of the big road, and when the day come, there's where he made the critters stand — Brer Bear at the bend of the road, Brer Wolf a little further off, and Brer Fox at a point where the crossroads was. Brer Coon and Brer Possum and the others he scattered about up and down the Road. 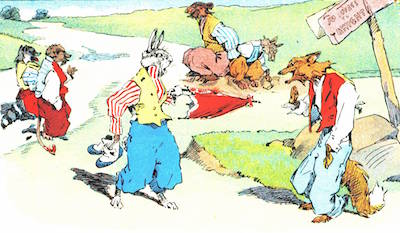 To them what has to wait, it seem like the sun stops and all the clocks with him. Brer Bear done some growling; Brer Wolf some howling and Brer Possum some laughing; but after while a cloud come up from somewheres. It weren't such a big cloud, but Brer Rabbit knowed that Cousin Rain was in there along with Uncle Wind. The cloud crept up, it did, till it got right over the big road, and then it kind of dropped down a little closer to the ground. It look like it kind of stop, like a buggy, for Cousin Rain to get out, so there'd be a fair start. Well, he got out, 'cause the critters can see him, and then Uncle Wind, he got out. 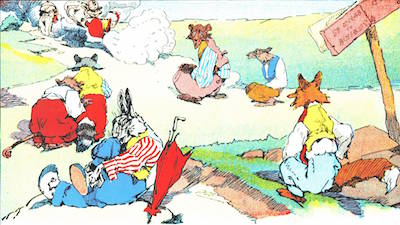 And then, gentlemens, the race begun for to commence! Uncle Wind helped 'em both; he had his bellows with him, and he blowed it! Brer Dust got up from where he was a-laying at, and come down the road just a-whirling. He stricken old Brer Bear first, then Brer Wolf, and then Brer Fox, and after that, all the other critters, and it come mighty nigh suffocating 'em! 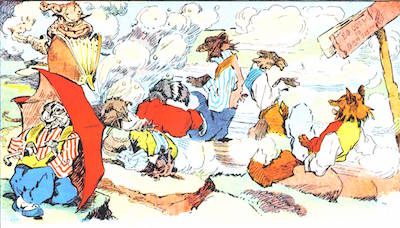 
Not never in all your born days is you ever heared such coughing and sneezing, such snorting and wheezing! And they all look like they was painted red. Brer Bear sneeze so hard that he had to lay down in the road, and Brer Dust come mighty nigh burying him, and it was the same with the other critters — they got their ears, their noses, and their eyeses full.

And then Cousin Rain come along, a-pursuing Brer Dust, and he come mighty nigh drowning 'em. 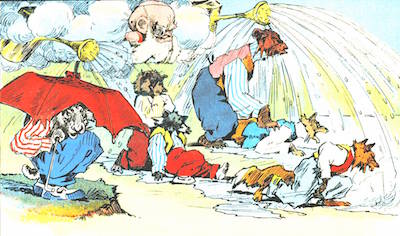 
He left 'em covered with mud, and they was worse off than before. it was the longest before they can get the mud out of their eyes and ears, and when they get so they can see a little bit, they took notice that Brer Rabbit, instead of being full of mud, was as dry as a chip, if not dryer. 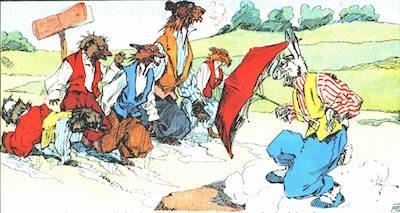 
It make 'em so mad, that they all put out after him, and try their level best for to catch, but if there was anything in the round world that Brer Rabbit's got, it's supple foots, and it weren't no time 'fore the other critters can't see hair nor hide of him! All the same Brer Rabbit ain't bargain for to have two races the same day.

They tells me, that when Cousin Rain can't see nothing of Brother Dust, he thunk he am beat, but he holler out, "Brer Dust, wherebouts is you?' and Brer Dust he holler back, "You'll had to excuse me; I fell down in the mud and can't run no more!"