46. Brother Wolf Still in Trouble. Text Source: Nights with Uncle Remus by Joel Chandler Harris. Online at Project Gutenberg. I have removed the frame material and standardized the spelling; click here for the original spelling plus all notes to the story.


BRER WOLF UNDER A ROCK

After old Brer Wolf get the natural hide took off of 'im on the account of Brer Rabbit kettle, course he had to go 'way off by hisself for to let the hair grow out. He was gone so long that Brer Rabbit sort of allow to hisself that he expect he can come down out of he steeple, and sort of rack 'round amongst the other critters.

Brer Rabbit gallop on, he did, talking and laughing with hisself, and every time he pass folks, he'd turn it off and make like he singing. He was going on this a-way, when first news you know he took and hear something. He stop talking and begun to hum a tune, but he ain't meet nobody. Then he stop and listen and he hear something holler, "O Lordy! Lordy! Won't somebody come help me?"

Brer Rabbit hear this, and he stop and listen. It weren't long 'fore something or other holler out, "O Lordy, Lordy! Please, somebody, come and help me."

Brer Rabbit, he hoist up he ears, he did, and make answer back, "Who is you, nohow, and what the name of goodness the matter?"

"Please, somebody, do run here!"

Brer Rabbit, he took and stand on three legs for to make sure of getting a good start if there was any needs of it, and he holler back, "Whereabouts is you, and how come you there?"

"Do please, somebody, run here and help a poor miserable critter. I'm down here in the big gully under this here great big rock."

Old Brer Rabbit pleased to be mighty particular in them days, and he crept down to the big gully and look in, and who the name of goodness you expect he seed down there? Nobody in the round world but that there old Brer Wolf what Brer Rabbit done been scalded the week 'fore that!

He was laying down there in the big gully, and, bless gracious! Up on top of 'im was a great big rock, and if you want to know the reason that there great big rock ain't teetotally killed Brer Wolf, then you'll had to ask someone what know more about it than what I does, 'cause it look like to me that it just ought to mash 'im flat.

Yet there he was, and let alone being killed, he got strength 'nough left for to make folks hear 'im holler a mile off, and he holler so lonesome that it make Brer Rabbit feel mighty sorry, and no sooner is he feel sorry than he hold he coat-tails out the way and slid down the bank for to see what he can do.

When he get down there Brer Wolf ask 'im please, sir, can he help 'im with the removance of that there rock, and Brer Rabbit allow he expect he can; and with that Brer Wolf holler and tell 'im for mercy sake won't he whirl in and do it, which Brer Rabbit took and catch hold of the rock and hump hisself, and it weren't long 'fore he get a purchase on it, and, bless your soul, he lift 'er up just like black man at the log-rolling.

It turn out that Brer Wolf ain't hurted much, and when he find this out, he took and took a notion that if he ever going get he revengeance out of Brer Rabbit, right then was the time, and no sooner does that come 'cross he mind than he took and grab Brer Rabbit by the nap of the neck and the small of the back.

Brer Rabbit he kick and squeal, but it ain't do no manner of good, 'cause the more what he kick the more tighter Brer Wolf clamp 'im, which he squoze 'im so hard that Brer Rabbit was feared he was going to cut off he breath. Brer Rabbit, he allow, "Well, then, Brer Wolf! Is this here the way you thanks folks for saving your life?"

Brer Wolf grin big, and then he up and allow, "I'll thank you, Brer Rabbit, and then I'll make fresh meat out of you."

Brer Rabbit allow, he did, "If you talk that a-way, Brer Wolf, I never is to do you another good turn whiles I live."

Brer Wolf, he grin some more and allow, "That you won't, Brer Rabbit, that you won't! You won't do me no more good turn till you are done dead."

Brer Rabbit, he sort of study to hisself, he did, and then he allow, "Where I come from, Brer Wolf, it's against the law for folks for to kill them what done done 'em a good turn, and I expect it's the law right 'round here."

With that, they put out, they did, and make their way to where old Brer Terrapin stay; and when they get there, Brer Wolf he took and tell he side, and then Brer Rabbit he took and tell he side. old Brer Terrapin put on he specs and clear up he throat, and then he allow, "There's a mighty heap of mixness in this here dispute, and 'fore I can take any sides you'll just had to carry me for to see the place whereabouts Brer Wolf was when Brer Rabbit found 'im," says he.

Sure 'nough, they took and carried old Brer Terrapin down the big road till they come to the big gully, and then they took 'im to where Brer Wolf got caught under the big rock. Old Brer Terrapin, he walk 'round, he did, and poke at the place with the end of he cane. By and by he shook he head, he did, and allow, "I hates mightily for to put you all gents to so much trouble; yet, there ain't no two ways, I'll have to see just how Brer Wolf was caught, and just how the rock was laying upon top of 'im," says he. "The older folks gets, the more trouble they is," says he, "and I ain't denying but what I'm a-ripening more samer than a persimmon what's been strucken with the frost," says he.

Then Brer Wolf, he took and lay down where he was when Brer Rabbit found 'im, and the others they up and roll the rock upon top of 'im. They roll the rock upon 'im, and there he was. Brer Terrapin, he walk all 'round and 'round, and look at 'im. Then he sat down, he did, and make marks in the sand with he cane like he studying about something or other. 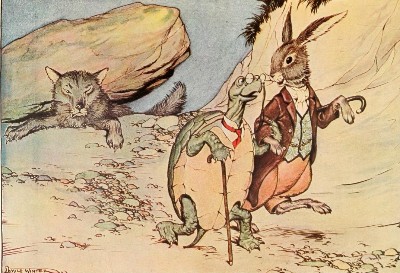 By and by, Brer Wolf, he open up, "Ow, Brer Terrapin! This here rock getting mighty heavy!"

Brer Terrapin, he mark in the sand, and study, and study. Brer Wolf holler, "Ow, Brer Terrapin! this here rock mashing the breath out of me." 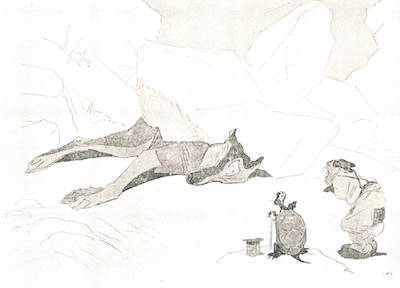 This make Brer Rabbit look ashamed of hisself, but Brer Terrapin talk right along, "When you was going down this here road this morning, you surely must been a-going somewheres. If you was going somewheres you better be going on. Brer Wolf, he weren't going nowheres then, and he ain't going nowheres now. You found 'im under that there rock, and under that there rock you left 'im."

And, bless gracious!Tthem there critters racked off from there and left old Brer Wolf under that there rock. 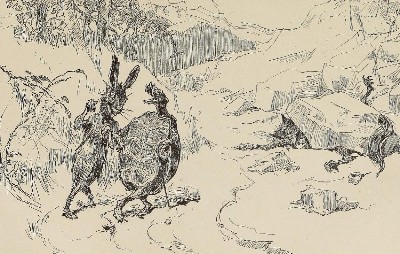