30. Brother Rabbit and His Famous Foot. Text Source: Nights with Uncle Remus by Joel Chandler Harris. Online at Project Gutenberg. I have removed the frame material and standardized the spelling; click here for the original spelling plus all notes to the story. 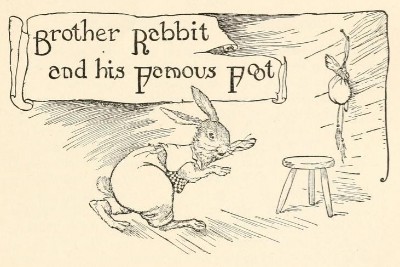 There's a tale about the rabbit foot. In the days whence Brer Rabbit was sort of keeping the neighborhoods stirred up, the other critters was studying and studying the whole blessed time how they going to nab him. They ain't had no holiday yet, 'cause when the holiday come, they'd go to work, they would, and juggle with one another for to see how they going to catch up with Brer Rabbit. By and by, when all their plans, and their traps, and their jugglements ain't do no good, they all agree, they did, that Brer Rabbit got some conjurement what he trick 'em with. Brer Bear, he up and allow, he did, that he bound Brer Rabbit is a natural born witch; Brer Wolf say, says he, that he expect Brer Rabbit just in cahoots with a witch; and Brer Fox, he vow that Brer Rabbit got more luck than smartness. Den Judge Bear, he drop he head one side, he did, and he ask how come Brer Rabbit got all the luck on he own side. the more they ask, the more they get pestered, and the more they get pestered, the worse they worry. Day in and day out they work with this puzzlement; let alone that, they sat up nights; and by and by they agree amongst theyself that they better make up with Brer Rabbit, and see if they can't fine out how come he so lucky.

Whiles all this going on, old Brer Rabbit was a-galloping 'round from Funtown to Frolicville, a-kicking up the devilment and terrifying the neighborhoods. It keep on this a-way, till one time, during the odd-come-shorts, old Judge Bear sent word that one of his chilluns done been took with a sickness, and he ask won't old Miss Rabbit drop 'round and sit up with him. Old Miss Rabbit, she say, course she go, and after she fill her satchel full of herbs and truck, off she put.

I done forget, which one of them chilluns was ailing. It might've been Kubs, and it might've been Klibs; but no matter for that. When old Miss Rabbit get there, old Miss Bear was a-sitting up in the chimney-corner just a-dozing and a-nursing the young'un; and all the women of the neighborhoods was there, a-whispering and a-talking, just for all the world like women does these days. It was, "Come right in, Sis Rabbit! I mighty proud to see you. I mighty glad you fetch yo' knittin', 'cause I'm powerful po' company when my chillun sick. Just fling yo' bonnet on the bed there. I'm that flustrated till I don't know which end's up, scarcely. Sis Wolf, hand Sis Rabbit that rockin'-chair there, 'cause it ain't no one step from her house to mine."

That the way old Miss Bear run on, and they sat there and they chatter and they clatter. Old Brer Wolf, he was sitting out on the back piazza smoking and nodding. He'd take and draw a long whiff, he would, and then he'd drop off to nodding and let the smoke oozle out through he nose. By and by old Sis Rabbit drop her knitting in her lap, and sing out, says she, "Lord, Sis Bear! I smells tobacco smoke," says she.

Old Sis Bear, she jolt up the sick baby, and swap it from one knee to the other, and allow, "My old man been smoking 'round here the whole blessed day, but soon as this here chile took sick, I just took and told him, says I, for to take hisself off in the woods where he belong at, says I. Yessum! I did that! I pities any woman what her old man is foreverlasting stuck 'round the house when there's any sickness going on," says she.

Ole Brer Wolf sat out there on the back piazza, and he shut one eye, he did, and open 'em again, and let the smoke oozle out of he nose. Sis Bear, she jolt the sick baby and swap it from one knee to the other. They sat there and talk till by and by their confab sort of slack up. First news they know Sis Rabbit drop her knitting and fling up her hands and squall out, "The gracious and the goodness! If I ain't done come traipsing off and left my old man money-purse, and he got something in there what he won't take a pretty for, neither! I'm that forgetful," says she, "till it keep me miserable mighty nigh the whole time," says she.

Brer Wolf, he lift up he ear and open he eye, and let the smoke oozle out of he nose. Sis Bear, she jolt the sick baby worse and worse, and by and by, she up and say, says she, "I mighty glad it ain't me, that I is," says she, "because if I was to left my old man money-purse laying 'round that a-way, he'd just naturally rip up the planks in the floor, and ear all the bark off of the trees," says she.

Ole Miss Rabbit, she sat there, she did, and she rock and study, and study and rock, and she don't know what to do. Old Sis Bear, she jolt and jolt the baby. Old Brer Wolf, he let the tobacco smoke oozle thorugh he nose, he did, and then he open both eyes and lay he pipe down. With that, he crept down the back steps and lit out for Brer Rabbit house. Brer Wolf got gait same like race-horse, and it ain't take him long for to get where he going. When he get to Brer Rabbit house, he pull the latch-string and open the door, and when he do  this, one of the little Rabs wake up, and he holler out, "That you, mammy?" 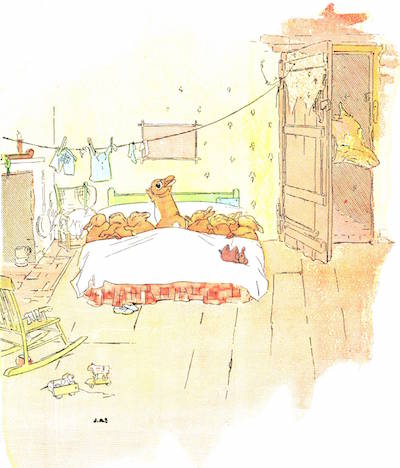 Then Brer Wolf wish he can sing "Bye-O-Baby," but before he can make answer, the little Rab holler out again, "That you, mammy?"

Ole Brer Wolf know he got to do something, so he took and whisper, he did, "Sh-sh-sh! Go to sleep, honey. The boogers'll get you!" and with that the little Rab begun to whimper, and he whimper hisself off to sleep.

Then when it seem like the little Rabs, which they was mighty nigh forty-eleven of 'em, is all gone to sleep, Brer Wolf, he crept 'round, he did, and feel on the mantel-shelf, and feel, and feel, till he come to old Brer Rabbit money-purse. If he weren't so light with he hand, he'd a knock off the paregoric vial what old Miss Rabbit put up there. But nevermind! Brer Wolf, he feel, and feel, till he come to the money-purse, and he grab  that, he did, and he just flewed away from there.

When he get out of sight and hearing, Brer Wolf look at the money-purse, and see what in it. It was one of these here kind of money-purse with tassel on the end and shiny rings in the middle. Brer Wolf look in there for to see what he can see. In one end there was a piece of calamus-root and some collard-seeds, and in the other end there was a great big rabbit foot. This make Brer Wolf feel mighty good, and he gallop off home with the assurance of a man what done found a gold mine.

He mope and he mope around. Look like Brer Wolf got all the luck and Brer Rabbit ain't got none. Brer Wolf get fat, Brer Rabbit get lean; Brer Wolf run fast, Brer Rabbit lope heavy like old Sis Cow; Brer Wolf feel funny, Brer Rabbit feel poorly. It keep on this a-way, till by and by Brer Rabbit know something or other pleased to be done. Last he make up he mind for to take a journey, and he fix up he tricks, he do, and he go and see old Aunt Mammy-Bammy Big-Money.

In them days, there was a Witch-Rabbit, and that was her entitlements—old Aunt Mammy-Bammy Big-Money. She live way off in a deep, dark swamp, and if you go there you had to ride some, slide some; jump some, hump some; hop some, flop some; walk some, balk some; creep some, sleep some; fly some, cry some; follow some, holler some; wade some, spade some; and if you ain't monstrous careful you ain't get there then. Yet Brer Rabbit he get there after so long a time, and he mighty nigh wore out.

He sat down, he did, for to rest hisself, and by and by he see black smoke coming out of the hole in the ground where the old Witch-Rabbit stay. Smoke get blacker and blacker, and after while Brer Rabbit know the time done come for him to open up and tell what he want. 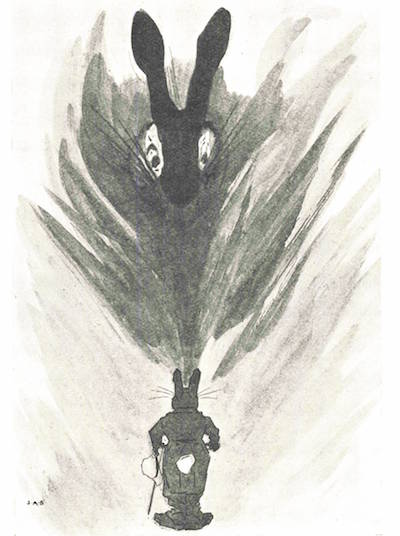 "Mammy-Bammy Big-Money, I needs yo' help."

"Mammy-Bammy Big-Money, I lost the foot you give me."

"Mammy-Bammy Big-Money, my luck done gone. I put that foot down upon the ground. I left 'em there I know not where."

With that, old Aunt Mammy-Bammy Big-Money sucked all the black smoke back in the hole in the ground, and Brer Rabbit just put out for home.

When he get there, what do he do? Do he go off in a corner by hisself, and wipe he weeping eye? That he don't—that he don't. He just took and wait he chance. He wait and he wait; he wait all day, he wait all night; he wait mighty nigh a month. He hang 'round Brer Wolf house; he watch and he wait.

By and by, one day, Brer Rabbit get the news that Brer Wolf just come back from a big frolic. Brer Rabbit know he time coming, and he keep both eye open and both ears hoist up. Next morning after Brer Wolf get back from the big frolic, Brer Rabbit see him come out of the house and go down the spring after bucket water. Brer Rabbit, he slip up, he did, and he look in.

Old Miss Wolf, she was sailing 'round frying meat and getting breakfast, and there hanging 'cross a chair was Brer Wolf waistcoat where he keep he money-purse. Brer Rabbit rush up to door and pant like he mighty nigh fag out. He rush up, he did, and he sing out, "Mornin', Sis Wolf, mornin'! Brer Wolf sent me after the shavin'-brush, which he keep it in that there money-purse what I loaned him."

Sis Wolf, she fling up her hands and let 'em drop, and she laugh and say, says she, "I declare to gracious, Brer Rabbit! You gimme such a turn, that I ain't got room to be polite scarcely."

But most before she gets the words out of her mouth, Brer Rabbit done grab the money-purse and gone! And I tell you this, Brer Rabbit road ain't lay by the spring; I bound you that!