14. Brother Terrapin Deceives Brother Buzzard. Text Source: Nights with Uncle Remus by Joel Chandler Harris. Online at Project Gutenberg. I have removed the frame material and standardized the spelling; click here for the original spelling plus all notes to the story.


TURTLE, BUZZARD, and the HONEY

What the case might be these days, I aint a-saying, but, in them times, old Brer Terrapin love honey more samer than Brer Bear, but he was that flat-footed that, when he find a bee-tree, he can't climb it, and he go so slow that he can't hardly find 'em. By and by, one day, when he going along down the road just  a-honing after honey, who should he meet but old Brer Buzzard. 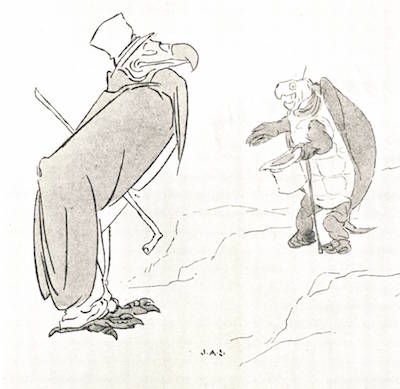 Dey shook hands mighty sociable and ask about the news of the neighborhoods, and then, after while, Brer Terrapin say to old Brer Buzzard, says he, that he want to go into cahoots with him along of getting honey, and it weren't long before they struck a trade. Brer Buzzard was to fly 'round and look for the bee-tree, and Brer Terrapin he was to creep and crawl, and hunt on the ground.

Then Brer Terrapin say to hisself, says he, that he expect that bumbly-bee honey ain't the kind of honey what they been talking about, and there ain't no great shakes of honey there nohow. With that, Brer Terrapin crept into the hole and gobble up the last drop of the bumbly-bee honey by he own-alone self. After he done make 'way with it, he come out, he did, and he whirl in and lick it all off of his footses, so old Brer Buzzard can't tell that he done been get a mess of honey.

Then old Brer Terrapin stretch out he neck and try to lick the honey off of he back, but he neck too short; and he try to scrape it off up against a tree, but it don't come off; and then he wallow on the ground, but still it don't come off. Then old Brer Terrapin jump up, and say to hisself that he'll just about rack off home, and when Brer Buzzard come he can lie on he back and say he sick, so old Brer Buzzard can't see the honey.

Brer Terrapin start off, he did, but he happen to look up, en, lo and beholds, there was Brer Buzzard hovering right spang over the spot where he is. Brer Terrapin know Brer Buzzard pleased to see him if he start off home, and more than that, he know he be find out if he don't stir 'round and do something mighty quick. With that, Brer Terrapin shuffle back to the bumbly-bee nest swift as he can, and build him a fire in there, and then he crawl out and holler, "Brer Buzzard! O Brer Buzzard! Run here, for gracious sake, Brer Buzzard, and look how much honey I done find! I just crept in a little ways, and it just drip all down my back, same like water. Run here, Brer Buzzard! Half yourn and half mine, Brer Buzzard!"