C089. How Wattle Weasel Was Caught

55. How Wattle Weasel Was Caught. Text Source: Nights with Uncle Remus by Joel Chandler Harris. Online at Project Gutenberg. I have removed the frame material and standardized the spelling; click here for the original spelling plus all notes to the story.


HOW WATTLE WEASEL WAS CAUGHT

There was one time when all the critters was living in the same settlement and using out of the same spring, and it got so that they put all they butter in the same piggin. They put it in there, they did, and they put it in the spring-house, and they'd go off and attend to they business. Then when they come back they'd find where someone been nibbling at they butter. They took and hide that butter all 'round in the spring-house; they set it on the rafters, and they bury it in the sand; yet all the same the butter'd come up missing.

By and by it got so they don't know what to do; they examine the tracks, and they find out that the man what nibble they butter is little Wattle Weasel. He come in the night, he come in the day; they can't catch 'im. Last the critters took and held a confab, and they agree that they had to set someone for to watch and catch Wattle Weasel.

Brer Mink was the first man appointed, 'cause he weren't more than a half a hand no way you can fix it. The other other critters they took and went off to they work, and Brer Mink he took and sat up with the butter. He watch and he listen, he listen and he watch; he ain't see nothing, he ain't hear nothing. Yet he watch, 'cause the other critters done fix up a law that if Wattle Weasel come whiles somebody watching and get off without getting caught, the man what watching ain't can eat no more butter enduring of that year.

Brer Mink, he watch and he wait. He set so still that by and by he get the cramps in the legs, and just about that time little Wattle Weasel pop he head under the door. He see Brer Mink, and he hail 'im, "Heyo, Brer Mink! You look sort of lonesome in there. Come out here and let's take a game of hiding-switch."

Brer Mink, he want to have some fun, he did, and he took and join Wattle Weasel in the game. They play and they play till, by and by, Brer Mink get so wore out that he ain't can run, scarcely, and just soon as they sits down to rest, Brer Mink, he drops off to sleep. Little Wattle Weasel, so mighty big and fine, he goes and nibbles up the butter, and pops out the way he come in.

The* critters, they come back, they did, and they find the butter nibbled, and Wattle Weasel gone. With that, they marks Brer Mink down, and he ain't can eat no more butter that year. Then they fix up another choosement and appoint Brer Possum for to watch the butter.

Brer Possum, he grin and watch, and by and by, sure enough, in pop little Wattle Weasel. He come in, he did, and he sort of hunch Brer Possum in the short ribs, and ask 'im how he come on. 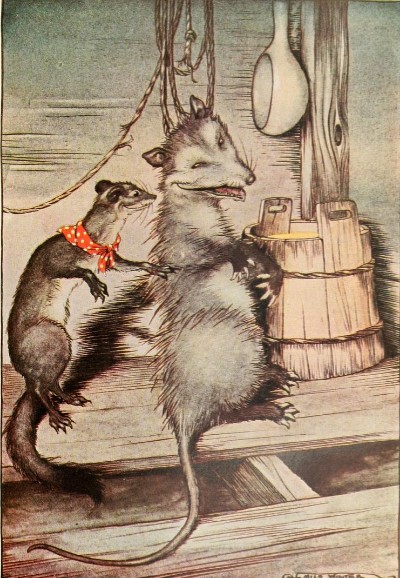 Then the critters took and mark Brer Coon down, they did, and appoint Brer Fox for to watch the butter. Wattle Weasel sort of afeared of Brer Fox. He study long time, and then he wait till night. Then he took and went 'round in the old field and woke up the Killdeers and drove 'round towards the spring-house. Brer Fox hear 'em holler, and it make he mouth water. By and by, he allow to hisself that it ain't no harm if he go out and slip up on one.

Brer Fox took and slip out, and Wattle Weasel he slicked in, and bless your soul! There goes the butter!

Brer Fox he get marked down, and then the critters took and appoint Brer Wolf for to be they watcher. Brer Wolf, he sat up there, he did, and sort of nod, but by and by he hear someone talking outside the spring-house. He hoist up he ears and listen. Look like some of the critters was going by, and talking amongst theyself; but all Brer Wolf can hear is this here, "I wonder who put that there young sheep down there by the chinkapin tree, and I like to know whereabouts Brer Wolf is."

Then it seem like they pass on, and old Brer Wolf, he forgotted what he in there for, and he dash down to the chinkapin tree for to get the young sheep. But no sheep there, and when he get back, he see signs where Wattle Weasel done been in there and nibble the butter.

Then the critters took and mark Brer Wolf down, and appoint Brer Bear for to keep he eye upon the noggin of butter. Brer Bear he took and sat up there, he did, and lick he paw, and feel good. By and by Wattle Weasel come dancing in. He allow, "Heyo, Brer Bear, how you come on? I allowed I heard you snorting in here, and I just dropped in for to see."

Brer Bear tell him howdy, but he sort of keep one eye on 'im. Little Wattle Weasel allow, "And you got ticks on your back, Brer Bear?"

With that Wattle Weasel begun to rub Brer Bear on the back and scratch 'im on the sides, and it weren't long 'fore he was stretch out fast asleep and snoring like a saw-mill. Course Wattle Weasel get the butter. Brer Bear he got marked down, and then the critters ain't know what they gonna do scarcely.

But by and by he agreed, and he went down to the spring-house and look 'round. Then he took and got 'im a twine string, and hide hisself where he can keep he eye on the noggin of butter. He ain't wait long 'fore here come Wattle Weasel. Just as he about to nibble at the butter, Brer Rabbit holler out, "Let that butter alone!"

Wattle Weasel jump back like the butter burnt 'im. He jump back, he did, and say, "Surely that must be Brer Rabbit!"

"The same. I allowed you'd know me. Just let that butter alone."

"Just lemme get one little bit of taste, Brer Rabbit." 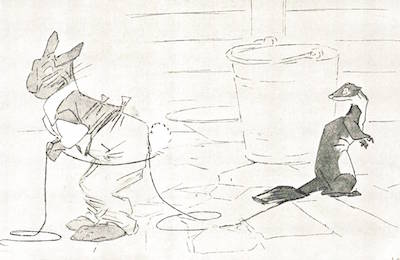 Little Wattle Weasel know how weakly Brer Rabbit tail is, but he ain't know how strong Brer Rabbit been with he tricks. So they took and tie their tails with Brer Rabbit twine string.

Wattle Weasel was to stand inside and Brer Rabbit was to stand outside, and they was to pull against one another with they tails. Brer Rabbit, he took and slip out of the string, and tie the end 'round a tree root, and then he went and peep at Wattle Weasel tugging and pulling.

By and by Wattle Weasel allow, "Come and untie me, Brer Rabbit, 'cause you done outpull me."

Brer Rabbit sat there, he did, and chew he cud, and look like he feel sorry about something.

By and by all the critters come for to see about they butter, 'cause they feared Brer Rabbit done make way with it. Yet when they see little Wattle Weasel tie by the tail, they make great admiration about Brer Rabbit, and they allow he the smartest one of the whole gang.