27. Brother Wolf Says Grace. Text Source: Nights with Uncle Remus by Joel Chandler Harris. Online at Project Gutenberg. I have removed the frame material and standardized the spelling; click here for the original spelling plus all notes to the story.

It done come 'cross my remembrance that there was one time when Brer Wolf caught Brer Rabbit. In them days, the critters was constant going a-courting. If it weren't Miss Meadows and the gals they was flying 'round, it was Miss Motts. They was constant a-courting. And it weren't none of this here "Howdy-do-ma'am-I-'spect-I-better-be-going" neither. It was go after breakfast and stay till after supper.

Brer Rabbit, he got took with a liking for Miss Motts, and soon one morning, he took and slick hisself up, he did, and put out to call on her. When Brer Rabbit get to where Miss Motts live, she done gone off somewheres.

Some folks'd've sat down and wait till Miss Motts come back, and then again some folks'd've took their foot in their hand and went back; but old Brer Rabbit, he ain't the man for to be outdone, and he just took and go in the kitchen and light he cigar, and then he put out for to pay a call on Miss Meadows and the gals.

When he get there, lo and beholds, he find Miss Motts there, and he tipped in, old Brer Rabbit did, and he galanted 'round amongst 'em, same like one of these here town chaps, what you see come out to Harmony Grove meeting-house. They talk and they laugh; they laugh and they giggle. By and by, 'long towards night, Brer Rabbit allow he better be going. The women folks there all ask him for to stay till after supper, 'cause he such lively company, but Brer Rabbit feared some of the other critters be hiding out for him; so he took and pay his respects, he did, and start for home. 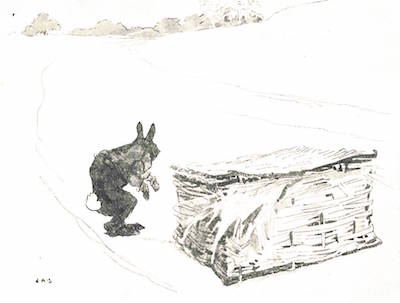 Ole Brer Wolf grin, he did, and lick he chops, and up and say, "Mighty glad you knowed me, Brer Rabbit, 'cause I knowed you just time you dropped in on me. I took an' tell Brer Fox yesterday that I was gonna take a nap 'longside of the road, an' I bound you'd come 'long an' wake me up, an' sure enough, here you come an' here you is," says Brer Wolf, says he.

When Brer Rabbit hear this, he begun to get mighty scared, and he whirl in and beg Brer Wolf for to please turn him loose; but this make Brer Wolf grin worser, and he tooth look so long and shine so white, and he gum look so red, that Brer Rabbit hush up and stay still. He so scared that he breath come quick, and he heart go like flutter-mill. He tune up like he going cry, "Where you gonna carry me, Brer Wolf?" "Down by the branch, Brer Rabbit."

"What you goin' down there for, Brer Wolf?"

"So I can get some water to clean you with after I done skinned you, Brer Rabbit."

"You talk so young you make me laugh, Brer Rabbit."

"You'll be sicker than that 'fore I get done with you, Brer Rabbit."

"Where I come from nobody dare to eat sick folks, Brer Wolf."

"Where I come from they ain't dare to eat no other kind, Brer Rabbit."

They went on this a-way, plumb till there get to the branch. Brer Rabbit, he beg and cry, and cry and beg, and Brer Wolf, he refuse and grin, and grin and refuse. When they come to the branch, Brer Wolf lay Brer Rabbit down on the ground and held him there, and then he study how he going make way with him. He study and he study, and whiles he studying Brer Rabbit, he took and study some on he own hook. Then when it seem like Brer Wolf done fix all the arrangerments, Brer Rabbit, he make like he crying worser and worser; he just fairly blubber.

"How that, Brer Rabbit?"

"I want you to show yo' politeness, Brer Wooly—ooly—oolf!"

"How I gonna do that, Brer Rabbit?"

"I want you to say grace, Brer Wolf, an' say it quick, 'cause I getting mighty weak."

"Fold yo' hands under yo' chin, Brer Wolf, an' shut yo' eyes, an' say: Bless us an' bind us, an' put us in crack where the Old Boy can't find us. Say it quick, Brer Wolf, 'cause I failing mighty fast." 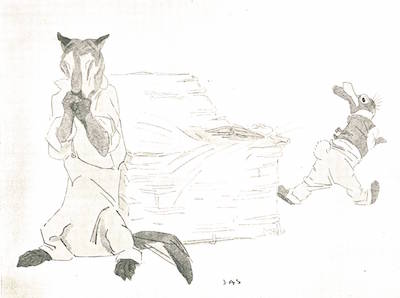 Brer Wolf, he put up he hands, he did, and shut he eyes, and allow, "Bless us an' bind us;" but he ain't get no further, 'cause just time he take up he hands, Brer Rabbit fetch a wiggle, he did, and lit on he foots, and he just naturally left a blue streak behind him. 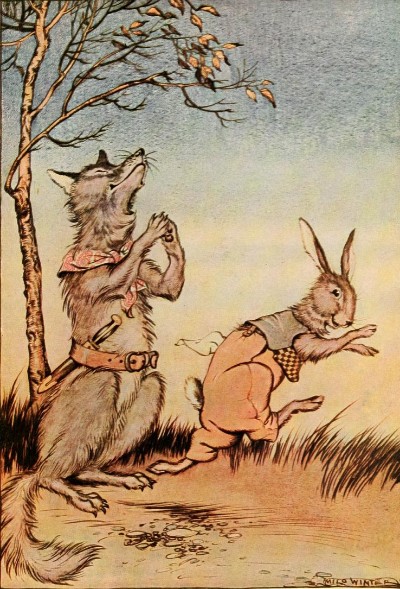